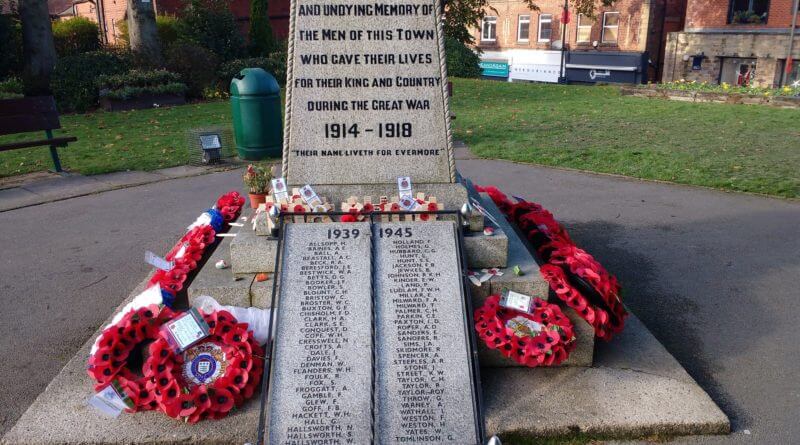 On Sunday 11 November Belper will remember those who sacrificed their lives for our freedoms.

The Memorial Gardens will be decorated with crochet and crafted poppies.

Wreath Laying and a short Service including 2 minutes silence will be held on the Memorial Gardens commencing at 10.50 am. The Service will be led by Rev. Anne Stratton. Uniformed Organisations will then parade to St Peters Church for the Church Service at 11.30am. The Parade continues after the Service from the Church to King Street.

Later at 7pm a “WW1 beacon of light” will be lit on the WW1 poppy field on The Chevin. The beacon will be visible from many parts of the town.

The beacon will be one of 1000 Beacons of Light to be lit at 7pm on 11th November 2018 throughout the United Kingdom, Channel Islands, Isle of Man and UK Overseas Territories – a century after the guns fell silent.

The beacon will commemorate the sacrifice of those who fought and did not return and of the huge army of men and women on the home front who, often in dangerous and exhausting conditions, underpinned the war effort – keeping the wheels of industry turning, bringing the harvests home to ensure the nation did not starve.

The Beacons will symbolise the ‘light of hope’ that emerged from the darkness of war.

The Town Council thanks Mr Jordan for building and lighting the Beacon. Regrettably, the public are not allowed onto the WW1 poppy field.