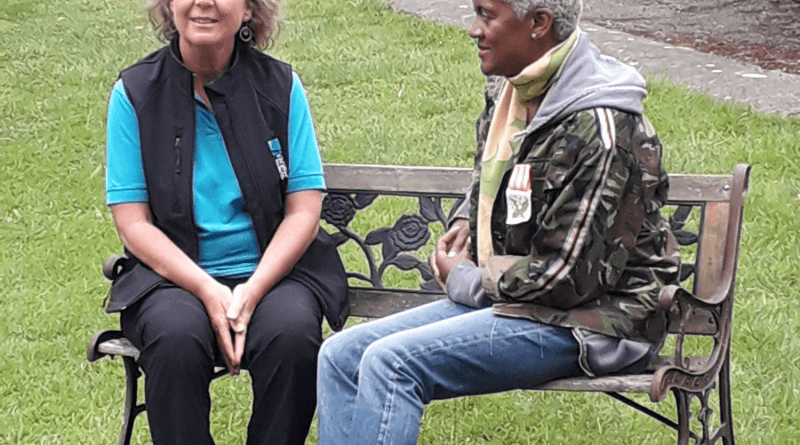 The presenters highlighted how the gardens help to reduce flooding whilst also being a beautiful landscape feature.

She said: “The opportunity to show rain gardens on primetime national TV was fantastic. Rain gardens are quite simple to create. By diverting rain water from our roofs into a concave flower bed, we can help to prevent flooding by allowing water to soak into the ground instead of running off into the rain water drains and gutters.

Most people don’t know that water would otherwise often go straight to the river, taking any pollution with it.”

The Trent Rivers Trust is a charity set up to conserve, protect and  enhance and the rivers and streams of the Trent Catchment. They work with anglers, landowners, partner organisations and the general public to improve the river environment.

Janet Honey and Cynthia Maddock are from the Strutt Centre in Belper and they are delighted with the rain garden. Janet says:

“We were very proud to have our centre featured on the BBC and would like to thank  our gardeners. If anyone would like to help to look after our rain gardens, please get in touch us here at the Strutts centre.”

The BBC team later visited Tanya and Dale Keeling who have made a rain garden of their own near Alfreton.

“Once Julie explained the concept of rain gardens to us we were keen to have one of our own in our garden, so we set to work. We love it, so we have now created another one in the back garden,” said Tanya.

“We’ve also made our front yard porous, so the rain soaks in instead of flowing away to the gutter. It was cheaper than having it covered in tarmac or paving. We think it looks great, it needs very little maintenance, and we never get out of our car into a puddle,” she added.

Julie agrees rain gardens can make a real difference to flood risk in residential areas but suggests more can be done to encourage people to create one of their own.

She adds: “It would make a difference if local landscape gardeners and builders could offer permeable driveways.  We are covering the landscape in more and more hard, impermeable surfaces, raising the risk of flooding. Rain gardens are a real alternative and they look great.”