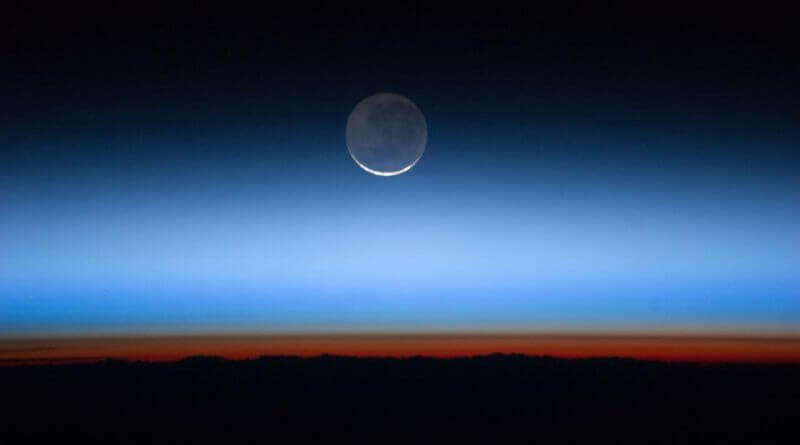 In June’s night sky Venus is prominent in the west and Jupiter in the south. Saturn also rises in the evening and, later in the month, Mars will be more visible. June is a good time to try and find noctilucent clouds. Earthshine may be seen when the Moon is in its crescent phase on the 16th and 17th of June.

Noctilucent clouds, also known as polar mesospheric clouds or night shining clouds, are the highest clouds in the Earth’s atmosphere (at heights of around 50 miles). They are normally too faint to see but in the summer months it is possible (although sightings are rare). Start looking around 4-6 weeks on either side of the summer solstice, which is on the 21st of June this year.

The clouds can be seen only when they are illuminated by sunlight from below the northern horizon. Try spotting them on a clear night, about 90 minutes after sunset, and look towards the low northwest horizon. Noctilucent clouds are very distinctive, shining with a luminous “electric blue” light. There are some images here: BBC News: Pictures of Rare Noctilucent Clouds and see the image above, from NASA images.

When the Moon is in its crescent phase look out for a phenomenon known as Earthshine. This occurs when the Moon is dimly illuminated by sunlight reflected from the Earth’s surface. Earthshine is also described as “the old Moon in the new Moon’s arms”. This month it may be visible around the 16th and 17th of June, when the Moon is new.

In the traditional song “The Ballad of Sir Patrick Spens” Earthshine is regarded as a bad omen for those at sea:

With the old Moon in her arms

And that is the sign since we were born

That means there will be a deadly storm”

Venus is now shining brightly in the west. On the 16th of June it will be close to a thin crescent Moon, about half an hour after sunset.

Jupiter is now clearly visible in the southeast as darkness falls, from around 10.00pm. Look out for it on the 23rd of June when it will be close to the Moon. Jupiter is large and bright at the moment and even binoculars will show its more prominent moons. A telescope will show all 4 of the Galilean moons, Jupiter’s equatorial bands and, maybe, the Great Red Spot (GRS).

Jupiter is relatively low in the sky and will remain so throughout the month. However, if you can get a telescope, now is a good time to look for the Great Red Spot (the giant storm that circulates around the planet). It should be noted that: the human eye is not sensitive enough to see the colour in the GRS through a telescope (your image will be black and white) and the Great Red Spot is actually quite difficult to see through a small telescope.

To help you, here is a list of times in June when the GRS will be on the centre line of the planet (all times are BST):

Mars and Saturn are shining brightly but are low in the southern sky – making observations difficult for anyone with an obscured horizon.

Saturn currently rises at about 10.30pm low in the southeast, rising earlier as the month progresses, it will be at its brightest on the 27th of June. If you can, try and look at Saturn through a  telescope – this is the best month to see it and the rings are open (a sight well worth seeing). Saturn will be close to a full Moon in the early hours of the morning on the 28th, around 2.30am.

Mars rises at about midnight, and towards the end of the month will be rising around 10.30pm. The planet is getting brighter now and in July will be the closest it has been to Earth since 2003 – it may even be possible to see some surface detail through a telescope.

There are no viewing opportunities for the period between the 6th of June and the 21st. The Spot the Station site recommends checking regularly for updates as the site is updated every 2 weeks or so. It is also possible to sign up for text and email alerts using the link here: Space Station Alerts. The service only alerts you to good sighting opportunities, that is sightings that are high in the sky and of enough duration to have a chance of spotting the space station.

If you are interested in astro photography and imaging, Professor Ian Morison’s Astronomy Digest offers excellent advice, as well as some beautiful images. There are over 40 articles in the Digest. A good starting point is:  “A Tale of Two Scopes” (where he notes the factors that make a real difference to image quality) and “Imaging The Moon and Jupiter through a Telescopic Lens”.

One thought on “Space Is The Place: The Night Sky Over Belper, June 2018”