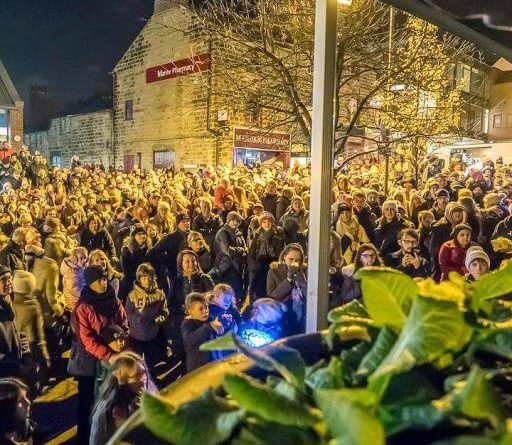 The 2017 Christmas Lights switch-on in Belper started the festive season with a bang.

Hundreds gathered to celebrate at the top of King Street, including Santa, his elf and the Mayor, Cllr Peter Hurst. With late night shopping, Belper Town Wind Band, Santa’s Grotto, street stalls and children’s rides it was a well-received opening to the festive season.

Once the lights were turned on people headed into the Memorial Gardens to see the light displays and seasonal music was played over loud speakers.

This year’s ceremony was different as Belper Town Council asked residents to suggest community ‘heroes’ to turn on the lights. Mayor Hurst said on the process that: “We had a number of nominations for who was going to turn on the Christmas lights. The council got together and the vote went to the three outside staff for their hard work throughout the year.

Mayor Hurst added: “We have given them the privilege of doing it purely and simply for the effort and the work they have put in for the town this year. IT’s been terrific. We won the east Midlands in Bloom and we have now got a gold in the national competition. These three men’s effort is what has done it.”

After turning on the lights Stuart Hopkinson, the town supervisor, said: “Thank you to all those who nominated. All three of us try to do our best to keep the town looking beautiful all year round. Thank you all and we’ll carry on doing the best for you all.”

In a speech made afterwards the Mayor declared that it had been “a fabulous year for the town.”