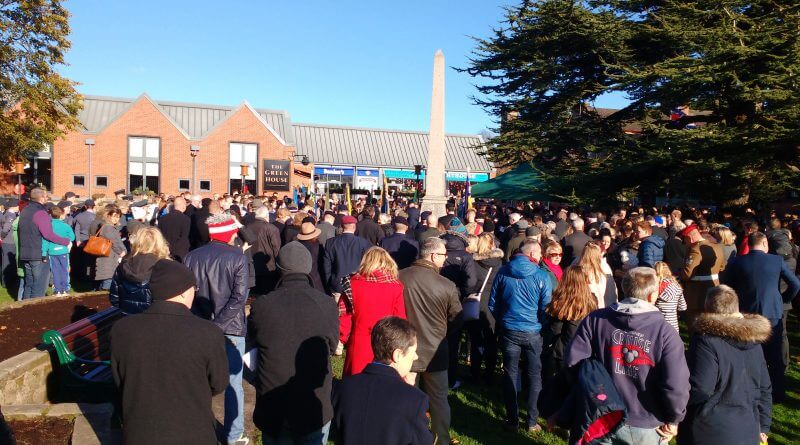 Belper Town Council has put up 100 poppies on lamp posts in the Town, along King Street, New Road, Bridge Street and Green Lane.

Armistice Day, held on November 11 every year, commemorates the signing of the armistice between the Allies and Germany at 11am on 11 November 1918. The eleventh hour of the eleventh day of the eleventh month. It signified the end of four years of fighting in the First World War.

On Remembrance Day over 300 people attended a short service led by Rev Anne Stratton, on the Memorial Gardens where the British Legion, Armed Services, Cadets, Scouts, Cubs and Beavers, Guides, Brownies and Rainbows, local Councillors and other groups laid wreaths on the war memorial and observed a two minutes silence. Accompanied by Heage Band, the British Legion, armed services and others then paraded to St Peters Church for the Church Service and on conclusion of the Church Service, paraded back to King Street.

Remembrance Sunday is held in the United Kingdom and the Commonwealth of Nations as a day to commemorate the contribution of British and Commonwealth military and civilian servicemen and women in the two World Wars and later conflicts.

It is held on the second Sunday in November, the Sunday nearest to 11 November, Armistice Day, the anniversary of the end of hostilities in the First World War at 11 a.m. in 1918.