Derbyshire County Council Leader Councillor Barry Lewis has met with a leading campaigner on employment rights for people with terminal illnesses to reaffirm the councils commitment to the cause.

Councillor Lewis met for a second time with Jacci Woodcock, from Milford near Belper, who is the founder and patron of the TUC’s Dying to Work Charter, to discuss the commitments that the council have agreed to sign up to.

Dying to Work was launched just over two years ago and Jacci has been campaigning with the TUC for a change in the law to protect employees with a terminal diagnosis after she claims she was forced out of her job by the company she worked for when she was told she had stage four incurable breast cancer.

Jacci said: “I am very proud and happy that Derbyshire County Council has agreed to sign the Voluntary Charter of the Dying to Work campaign.

“Councillor Lewis has positively endorsed that all the council’s employees are of great value and deserve respect and support at a distressing time of receiving a terminal diagnosis.

“What I am campaigning for is that the employee will be given the dignity and choice of whether they wish to retain the stimulation, normality and stability of remaining at work for as long as they choose to. A huge thank you to Councillor Lewis for his empathetic understanding, his support and his time.”

Jacci is being supported by Mid Derbyshire MP Pauline Latham OBE, who raised the campaign, and Jacci’s case, in Parliament last year. Just this week it also won the backing of Work and Pensions Minister Penny Mordaunt. 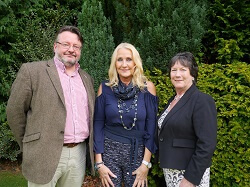 Councillor Lewis said: “We recognise the great importance of looking after our employees if they are diagnosed with a terminal illness and do all we can to try to relieve any stress they may have over their jobs, whether they decide to carry on working or not.

“Jacci has worked tirelessly to highlight this campaign and push for a change in the law, and it has been strengthened by Pauline’s strong commitment to the cause and a positive response from Government.

“The county council is pleased to be able to add its voice and ensure that its employees are protected and supported after receiving a terminal diagnosis.”

Mrs Latham joined Jacci and Councillor Lewis at County Hall, Matlock, where they welcomed the councils commitment to signing the charter and to talk about the progress of the campaign.

Pauline Latham said: “I am delighted that Derbyshire County Council has responded to the Dying to Work campaign.

“Now I would like more employers to sign up to the charter and take the council’s lead and that of Rolls-Royce Aero Engines, which has just signed up too.”

In signing the charter, the council will join other neighbouring authorities including Nottinghamshire and Leicestershire county councils, local organisations including Derbyshire Police and Derbyshire Community Health Services NHS Foundation Trust and large international companies including Eon and Santander.