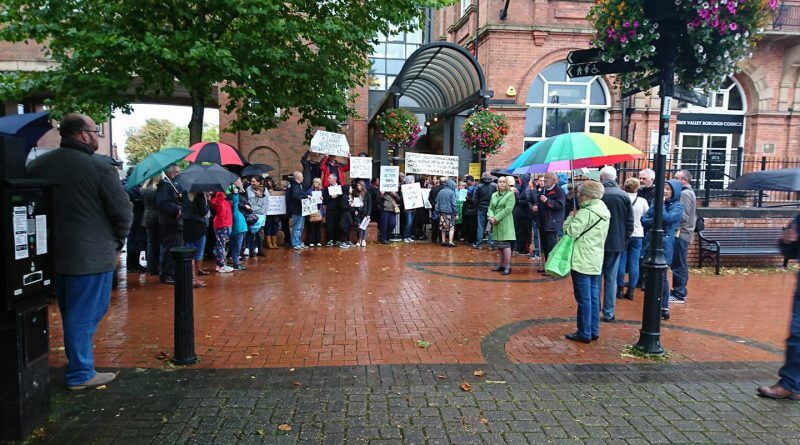 Over a hundred local residents gathered outside the Amber Valley Borough Council building in Ripley on Monday 18th September to protest against a housing development on Belper Lane.

The protest comes after Wheeldon Brothers submitted a plan to build 118 houses off Belper Lane, Belper.

The application (AVA/2016/1020) was for Residential development of 118 dwellings including sustainable drainage and infrastructure, demolition of 153 Belper Lane and outbuildings, extension and enhancement of existing public open space including new recreational facilities, landscape and ecological enhancements.

Monday night saw the AVBC’s Planning Board meet to make a final decision on the development.

The application was rejected 6-5.

An original application filed last year was for 150 houses. It was rejected due to concerns raised by statutory and non-statutory expert bodies, and the public, particularly in relation to heritage and landscape impact matters.

Labour Cllrs proposed a motion to move to a bigger venue ‘in the interest of democracy’ as there were 100 people unable to access the meeting. The Chair was not in favour and Cllr Jane Orton proposed she did not want a meeting moved on the grounds of safety.

Four local residents then spoke against the plan, followed by Cllr David Taylor, Cllr Joe Booth and Cllr Ben Bellamy who were also against it.

Cllr Bellamy formally objected to the application as the site is located within the Derwent Valley Mills World Heritage Site (DVMWHS), the impact that extra housing will have on schools and the pressure of increased traffic on Belper Lane.

Belper Town Council raised similar objections about the development being within the DVMWHS buffer zone, stating that it would be “out of character with the surrounding area.”

Historic England said: “The DVMWHS is a heritage asset of very high value. As the application may also affect the setting of listed buildings and the Belper and Milford Conservation Area.”

Protect Belper raised “a number of concerns with the applicant’s Historic Environment Assessment and feel that the negative effects posed by the development are simply observed, recorded and then disregarded.”

After some questions from board members the vote was put to reject the site, proposed by Labour’s Erik Johnson, and the motion was won with 5 Labour and one Conservative voting against the development.

One thought on “Application For 118 Houses On Belper Lane Rejected”