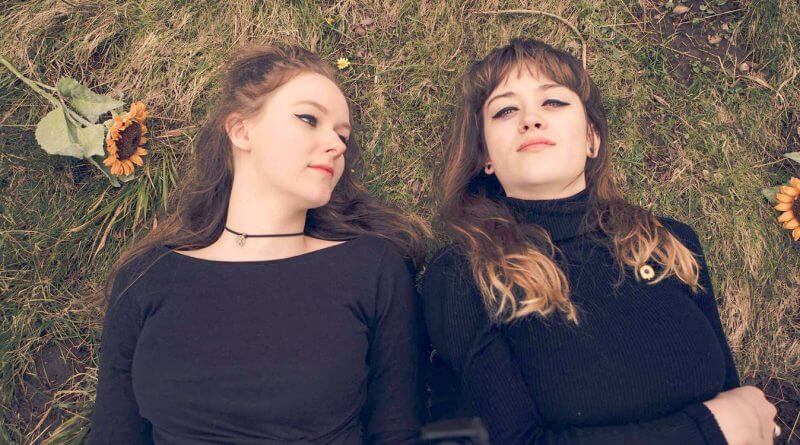 It’s safe to assume that Y Not 2017 won’t be too high up on most peoples ‘festival of the year’ lists, but those who did venture away from the main stage and risked trench foot to see the Sunflower Thieves were pleasantly rewarded.

Emily Dickinson said: “Fortune befriends the bold.” And the Sunflower Thieves have never been bolder as a four-piece with a bigger, brighter sound and accomplished collection of songs. As for fortune, well the Thieves were lucky enough to play two sets to large crowds despite the beleaguered festival cancelling almost half of its line-up due to bad weather.

Amy Illingworth and Lily Sturt-Bolshaw’s vocal harmonies form the backbone of the sound, but it is their inventive song arrangements that made the band stand out from their contemporaries at the festival. No mean feat with festival audiences who are notoriously fickle at the best of times.

We sat down to chat to the band about their new EP, touring and playing Y Not for the first time.

Nailed: You‘ve been going to Y Not for several years, what’s your best story from all those festivals?

Amy: We’ve had some super fun times at Y NOT – we first went when Lily’s dad was playing with one of the bands, so we sneaked in on a day ticket! Since then we’ve seen some amazing bands, met lots of new people, and got to know the festival so well it feels like we’ve never left when we get back there!

A highlight of last year’s festival was when a big group of us went to Motormouf’s set in The Saloon – I don’t think any of us have ever danced so much! It would be impossible to pick one best memory, whether it’s dancing to King Pleasure and the Biscuit Boys every year on the Sunday afternoon, drunkenly contemplating life at 3am with a Chinese takeaway sheltering from the rain under a stranger’s gazebo, or being on someone’s shoulders at one of the headliner’s set, with the whole crowd singing every word. One of my best memories is being on my brother’s shoulders for The Coral, with every single person around me having an amazing time, and all the lights and the atmosphere. However, for me this year, Tom Grennan was phenomenal.

Lily: There have been plenty of brilliant stories, but not many that would be PG enough! There’s often alcohol involved…I think one of my favourite memories though, was standing in the crowd for Newton Faulkner singing my heart out at the top of my lungs with some of my best friends.

Nailed: How  did it feeling performing this year instead of being in the audience?

Amy: It was quite strange arriving at Y NOT and taking the left turn into Artist Parking, rather than following the usual caterpillar of cars to the punters’ car parks. We’d had lots of information fired at us and it was slightly overwhelming, but we were really well looked after once we’d got in and got our bearings. So many familiar faces appeared at both of our sets, which were both on the Friday, firstly at the Hog & Barrel, and then The Allotment later on in the afternoon. The support from people we knew [lots of Belper people!], recognised, and also those we didn’t know, was overwhelming. We really enjoyed playing both sets, and the response was really encouraging.

Lily: Absolutely amazing! So many friendly faces from different stages in our lives. It was just such a heart-warming and exciting experience.

Nailed: How  has the dynamic changed in the Sunflower Thieves since you became a four piece?

Amy: Personally, I think I have become more comfortable onstage, and can relax and enjoy the performance. It’s brilliant to be able to feel and hear what we imagined for our songs for so long, and the boys are super talented at what they do. There are even more ideas, and a full band opens many more doors for us. We have a lot of laughs as a band, and although we will still do the odd acoustic/duo performance, we are loving playing with the band, so expect to see more of us with Tom and Jamie from now on!

Lily: It’s opened up a whole new world for us. The guys bring a new energy to our music, which lifts it to a completely new level.

Nailed: It’s been a pretty busy year for the band, what has been your highlight so far?

Amy: My highlight was definitely releasing the EP. We’d worked so hard last year bringing everything together, with so many people who supported us and waited so patiently. We have the greatest support network around us, and our EP launch in Belper just proved that, alongside the response to our debut music video, ‘Spark’. A main focus of the release was the musicians and community around us, so we included lots of fabulous singers in the recording of ‘Spark’, and as many loved ones as possible in the video. It was quite a stressful time, and our CDs didn’t actually arrive at my house until the day of the launch [!!!], but I couldn’t have imagined a more perfect launch event.

Lily: Y NOT of course was a main highlight. Also Splendour Festival was a lot of fun, and playing various gigs at The Bodega in Nottingham throughout the year. It’s so nice to have progressed to be in playing in really good venues with great sound.

Nailed: Now  that you have released your debut EP ‘Hold The Storm’, what are your plans for the future? Are you thinking more EP’s or are you working towards an album?

Amy: I think the next step will be a single or a live video with the band, to get the word out about what we’re doing. Then probably another EP, not an album yet. We’re still finding our sound in many ways. I think we’d definitely like to release more videos, and get working on new songs as soon as possible, as we have more of an idea what we’re doing this time around – the first releases were definitely a learning curve! We’ve been doing lots of writing recently, so keep your eyes peeled!

Lily: The EP release was super exciting and so much fun to do a tour as well. I think the next stage for us is to get our name out there as a band, not just as a duo, so maybe a single and some more videos!

The Sunflower Thieves EP ‘Hold The Storm’ is available on Spotify now.