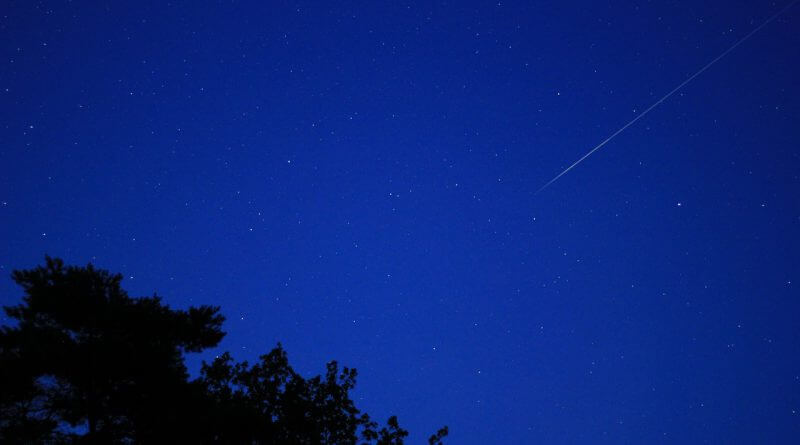 The night sky in August brings us the Summer Triangle, the annual Perseid meteor shower and a last chance to get a good look at Jupiter. There is a star party at Whistlewood Common, Melbourne, Derbyshire and, further afield, August also brings the much anticipated Great American Eclipse. We will not be able to see the eclipse in the UK but NASA will be providing a live stream of the event on the 21st of August.

The Perseid annual meteor shower peaks on the night of 12th August and goes on into the early hours of the 13th. This year the visibility of the meteors will be affected by bright moonlight. This will spoil views of all but the brightest meteors. The best time to see the Perseid meteor shower is generally in the early hours of the morning, when the radiant point of the shower is high in the sky. But this year it is all about avoiding the Moon. This gives a narrow window for viewing; between the sky getting dark enough to see meteors and the Moon rising and spoiling the view. So start watching from about 10.00pm onwards until the Moon starts to rise, around 11.00pm. Perseids appear at all points in the sky so just look upwards. However, after the Moon rises you will need to keep the Moon behind you, blocking it from your view in order to increase your chances of seeing some of the brighter meteors.

The reported rate for the peak of the shower is around 80 meteors per hour. This number is based on viewing in perfect conditions, with a 360 degree view of the sky. Fine in theory, but in reality we never get perfect viewing conditions, and this year the Moon is a real problem. So it is best to take this figure as a guide to the expected intensity of the shower. This year expect to see one or two meteors every 5 minutes or so, but only if the sky is dark – in the moonlight the viewing rate will be much lower. This should not put you off. The Perseids produce very impressive meteors, some leaving glowing trails in the sky. Well worth seeing; all you need is a dark sky and a bit of patience.

Although the Perseids peak on the night of the 12th of August the meteors can be seen on the nights leading up to the peak and for a couple of nights afterwards. Take the opportunity of any period without moonlight (generally before midnight) to see if you can spot any.

There will be a total solar eclipse over the mainland of the USA on the 21st of August. This promises to be one of the most observed eclipses in recent history, so expect lots of news coverage. The event cannot be seen from the UK but there is a live stream from NASA, available here: NASA Eclipse 2017 Live

NASA’s live stream should start at about 4.30pm our time, but check the site for more details as the event date approaches.

It is hard to describe the experience of strangeness and disorientation felt when standing under a total solar eclipse. Maybe Loop’s “Black Sun” captures some of its essence.

The Summer Triangle consist of three bright stars, Vega, Deneb and Altair. It can now be seen high in the south as night falls. The Summer Triangle is an asterism (a pattern of stars in the sky) and is formed of the brightest stars from the constellations: Lyra, Cygnus and Aquila. It also acts as a guide to the location of the Milky Way, as this seems to  weave its way through the “triangle”. Here is how to find the Summer Triangle, under the subheading “Making Sense of the Stars”.

Venus rises in the northeast about 3 hours before dawn. It is still very bright. Look out for it on the 19th of August, towards the east, when it will be close to a waning crescent Moon.

Look towards the southwest and you will see Jupiter, low and bright in the early evening sky. It is starting to disappear from the night sky now, and towards the end of the month it will start to set around 8.00pm. Jupiter moves closer to the horizon throughout August and this month may be our last chance to see the planet’s equatorial bands and moons before it returns to our night sky in 2018.

Saturn is very low in the evening sky. It rises in the southeast but never gets very high above the horizon and is setting earlier in the night throughout August. If you can find a clear horizon, a small telescope will show Saturn’s ring system and, at the moment, these are fully open. Try looking for Saturn as soon as it gets dark. Towards the end of the month it will be setting at around 10.40pm.

If you do not own a telescope and want to get a chance of viewing Saturn and Jupiter this month, The Derby and District Astronomical Society and Whistlewood Common will be holding a star party on Saturday 19th – Sunday 20th August 2017. The star party will be held at Whistlewood Common, near Melbourne, DE73 8DH. The event opens at 3pm on the Saturday and, as well as night time stargazing, there will also be solar observing during the day, games and activities for children and a competition to win a telescope. This is planned as a drop in family event with craft activities, refreshments and campfire cooking (bring your own food). Prices are £3/Adult £1/Child for a day ticket. You can even stay overnight: £5 per Tent and £15 per Caravan (the event is free to DDAS members). More details are available in the event flyer or from the DDAS website.