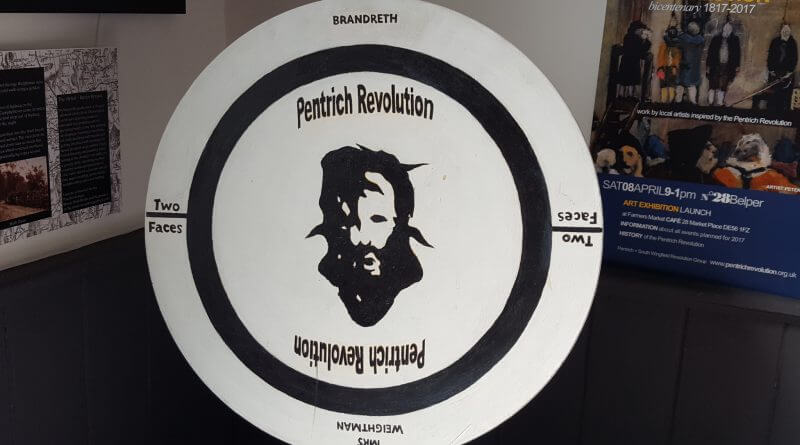 Not only was there art and music, but revolution was in the air at No.28 Cafe this Saturday where talents have been pooled to create a new exhibition marking the bicentenary of the Pentrich Revolution of 1817.

The exhibition, organised by No.28 Cafe and the Pentrich and South Wingfield Revolution Group, was launched by Mayor Gary Spendlove, by cutting a ceremonial ribbon. It features scores of newly commissioned pieces in a variety of media from sketches to large paintings, all representing different events and people involved in this historic act of rebellion.

The cafe was bustling with people, including the artists that had contributed work and their families who had come along to see the pictures framed on the walls. People talked with pride about their personal connections to the revolutionaries of the past. The Pentrich and South Wingfield Revolution Group was established in February 2012, to increase awareness of the 1817 Pentrich Revolution. 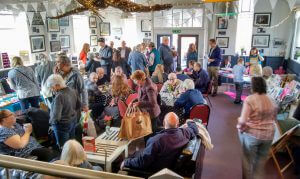 The Revolution was an uprising that began in Derbyshire in 1817 in response to huge economic and social changes that had swept through the country. Jobs losses, recession, the emerging Industrial Revolution and an ineffective government led to widespread unrest in the north.

Mayor Gary Spendlove praised the depth of artistic talent in the town, stating “the rich talent we have got is second to none, it’s great how it’s bringing people to the town.”

“I believe that when the Pentrich march took place there were only three people that weren’t related. It’s fascinating. I was particularly interested to see the painting of the prison ship on the wall, because one of my ancestors was deported to Australia for seven years, but he did come back.”

“I got involved after a callout for artists and submitted my work. They got back to me and said they would like me to get involved. They told me about this meeting (see image) and asked me do an interpretation. This is Jeremiah Brandreth and that’s Oliver the Spy.

“Jeremiah is the man that started the Pentrich Revolution and Oliver the spy who was sent by the government to find out what was happening. Oliver here has the plan in front of him.”

Music was provided by Julian Butt and Mike Smith, formerly of the Mills and Chimneys project, who played a charming set that focused on historical narratives of the region. The event was complimented by local artists and makers stalls and craft activities.