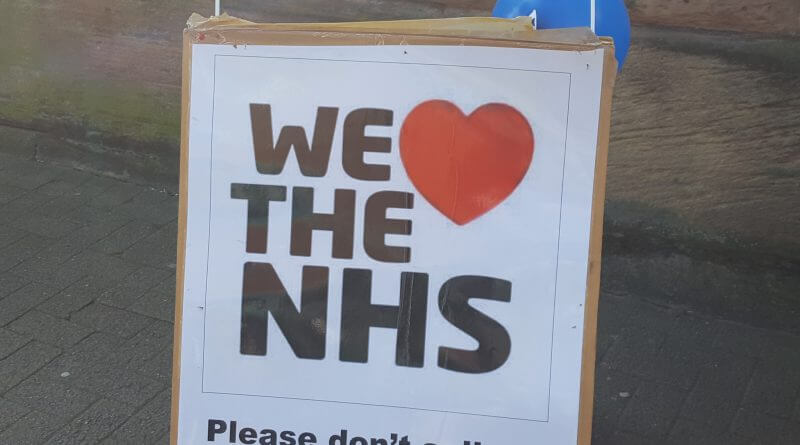 Belper’s Save Our NHS were today (Saturday 8th) leafleting and petitioning against the possible closure of Babington Hospital and the loss of 535 beds across Derbyshire under the recent NHS Sustainability and Transformation Plan.

Building upon the recent National Rally against cuts to NHS services and the local ‘Bed Push Rally’ (March 25th) that took place in Derby, the local arm of the campaign were protesting on Bridge Street, Belper throughout the morning.

With over 6000 names on their petition the campaign continues to spread awareness of the cuts to services within the NHS. The morning saw campaigners talk with many local residents who were interested in the future of Babington Hospital and the larger consultation process.

Organiser Keith Venables said:  “In November we realised locally that not only were we going to lose £219 million in Derby, but also the social care budget was going to lose about the same amount of money as well…They are selling it (The STP) as being more efficient, being more joined up, but what it’s really about is money being taken off the Derby budget”

Asked about the impact of the campaign to date, Venables said: “I think it has got the NHS to pause, we’ve had a lot of publicity from a hundred people on the street to the whole of East Midlands Television. They are aware of a massive opposition to the closure of the community hospital.”

What is the Sustainability and Transformation Plan (STP)?

NHS and local councils have come together in 44 areas covering all of England to develop proposals and make improvements to health and care. The proposals (published in November), called sustainability and transformation plans (STPs), are place-based and built around the needs of the local population(NHS England).

Campaigner Christine Jordan, speaking about the possible loss of beds,  said: “I think the problem for us is that we don’t actually know what the situation is. Looking at the way the planning is going I think that they are trying to spread resources within the area.”

“The other issue for me is that with the closure of these facilities, the people in the frontline are going to be the GP’s and they are already absolutely stretched to the limits.”

During a public consultation in December, Prem Singh, chairman of Derbyshire Community Health Services NHS Foundation Trust, said: “The Derbyshire Sustainability and Transformation plan will have far reaching importance for how we organise and provide care to patients locally in the future.”

Currently, no date has been set for a final decision on the STP and the future of Babington hospital.