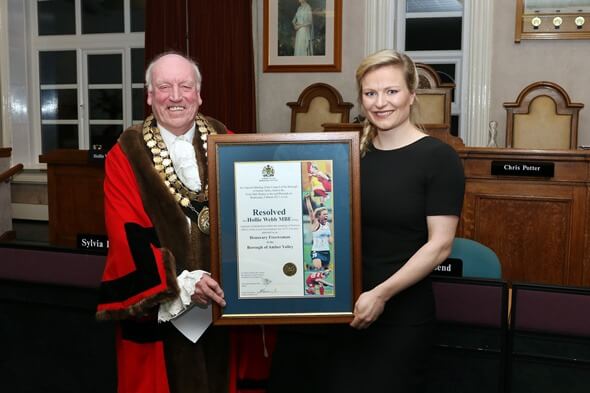 Like the rest of the country, local people were thrilled when the GB ladies hockey team edged to a stunning Gold Medal victory in the Rio Olympics…but Amber Valley had a special connection with the famous feat – winning penalty scorer Hollie Webb MBE, from Belper!

Following the summer’s heroics, Amber Valley Borough Council set about the task of making sure Hollie received due local recognition for her part in the Gold Medal win.

At a meeting of the Full Council in November, it was unanimously decided to award Hollie the highest honour Amber Valley Borough Council can bestow on one of its residents.

They also agreed that a Special Full Council meeting would be held at which the title of Freewoman of the Borough of Amber Valley would be conferred on Hollie.

The title of Freewoman of the Borough of Amber Valley has only been awarded to five other residents since 2001. It is reserved for people of distinction who have, in the opinion of the Council, provided eminent services to the Borough.

A former pupil at Ecclesbourne School, Hollie began her hockey career at the age of 7 with Belper Hockey Club after they advertised their Sunday morning junior sessions at the local primary schools. She made her England debut against South Africa in Cape Town in 2013, just before finishing her degree in Economics from the University of Sheffield.

A superb defender with a mean hit, Hollie also enjoyed netball at school and various other sports. She is always keen to pass on her hockey knowledge and coaches local youngsters when not playing herself.

Her career hit new heights when she displayed an ice-cool temperament under pressure in Rio to score the penalty shoot-out winner and secure Great Britain’s first ever women’s hockey gold medal. Hollie was also awarded the MBE in the New Year’s Honours.

Hollie now plays her club hockey with Surbiton and is also the current Derbyshire Sportswoman of the Year. She has recently had a break from the hockey field and taken to the dancefloor, performing on national television on the BBC Strictly Come Dancing Children in Need Special.

Commenting on becoming a Freewoman of the Borough of Amber Valley, Hollie said:

It is a huge honour to be awarded freedom of the Borough from Amber Valley. I am extremely proud to be from the Borough and represent my country at the highest level. I would like to thank everybody for their support over the years and I hope to continue to put Belper and our region on the sporting map while continuing my journey with the GB Hockey squad in our continued hunt for medal success.

Hollie has contributed so much to the sporting scene in the Borough, and is an inspiration to our young hockey players. Her performances in the summer helped lift the sport to new heights in this country, and we are all proud and delighted she is ‘one of our own’. It’s very rare that we are able to confer such an honour on one of our residents and so this is a truly memorable occasion.

(The featured image shows Hollie receiving a framed certificate commemorating her admission as an Honorary Freewoman of the Borough of Amber Valley, from Mayor of Amber Valley Cllr Richard Iliffe).