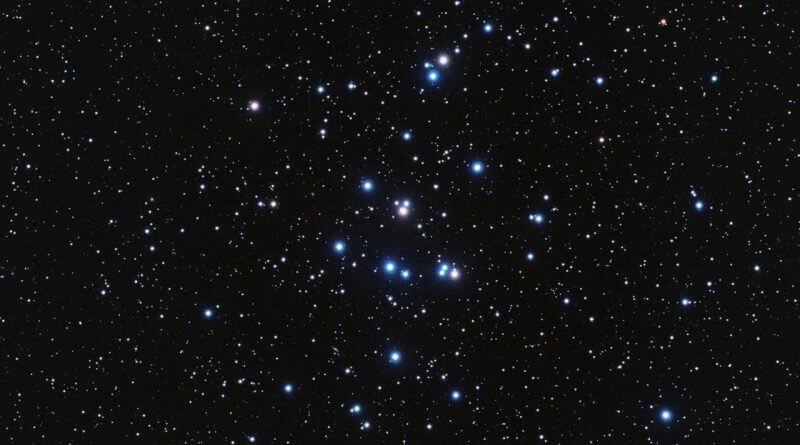 March brings more chances to view Venus before it disappears from our evening sky: Jupiter will take its place as the brightest planet on show in the evening. Later on in March there is a good opportunity to spot Mercury. For early risers it is worth seeking out Saturn, now at a decent elevation and with its rings fully on show. March is also a good month to locate M44,  the Beehive Cluster.

Venus continues to impress, look to the southwest just after sunset. The planet will appear in a telescope as an ever waning crescent reaching its thinnest on the 21st March. If you get a chance this month try and look at Venus through a telescope, its perfect crescent is one of the  prettiest things in the sky at the moment. Later on in the month Venus will be too low to see in the evening sky. Venus will become a morning object towards the end of March, rising just before dawn.

Jupiter is now an evening object rising from 10.00 pm, and towards the end of the month it will be rising at around 20.45pm. Look towards the southeast to see it lying in the constellation of Virgo just northwest of the bright star Spica. A small telescope will reveal its cloud bands and allow you to observe the orbits of its 4 Galilean moons. A pair of binoculars (10 x 50s or similar) will show it as a small disc and reveal its larger moons.

Mars is still visible in the west after sunset to the left of the much brighter Venus. Binoculars will reveal it as a small red dot.  For a much closer view see NASA’s 360 degree panoramic view of the surface of Mars taken from the Curiosity Mars Rover probe.

I haven’t mentioned Saturn until now because it has been sitting fairly low in the sky as an early morning object. In March it appears as a bright “star” in the southeast, rising around 3.00am and lying in the constellation of Sagittarius. A couple of hours before dawn the planet should be high enough in the sky to observe. Saturn’s rings are at their most open at the moment. So if you can it is worth getting up early to observe them. You will need a telescope to see the rings.

It may be possible to spot Mercury towards the last week of the month. Look towards the west, just after sunset, and you may see it low in the sky, just above the horizon. On the 29th of March you can use the thin crescent Moon as a “marker” as it will appear to the left of Mercury on that night.

Warning: Do not use a telescope or binoculars to view Mercury until after sunset. If you catch the Sun by mistake you will risk serious eye damage.

March is a good time to view the Beehive Cluster. This open star cluster is one of the objects catalogued by the astronomer Charles Messier, hence its designation as M44. It is also one of the first objects “resolved” by Galileo. Looking through his telescope in 1609 Galileo was able to observe:  “the nebula called Praesepe, which is not one star only, but a mass of more than 40 stars”.  A pair of binoculars (around 8- 10x magnification) will reveal the many stars in this cluster. The cluster itself is easily recognised as it looks like a swarm of bees surrounding a hive. (See the NASA image above this article).

The International Space Station swings back to the early morning in a time slot between 3.00am and 6.15am. You will have to get up early to spot it. Its fly-past generally takes a couple of minutes. Check Spot the Station for the exact times of its appearance and trajectory.

The Belper Astronomy Group continues to meet in the Queens Head, Chesterfield Road. If the nights are clear telescopes may be set – up to observe from the “terrace” outside the Queens Head. The BAG meet on the 1st and 3rd Thursdays of the month from 7.30 pm onwards. The next meetings are scheduled for the 16th of March and the 6th of April. As the BAG is a small and informal group check out their facebook page to confirm if there is a meeting on the night. See the link here: Belper Astronomy Group.