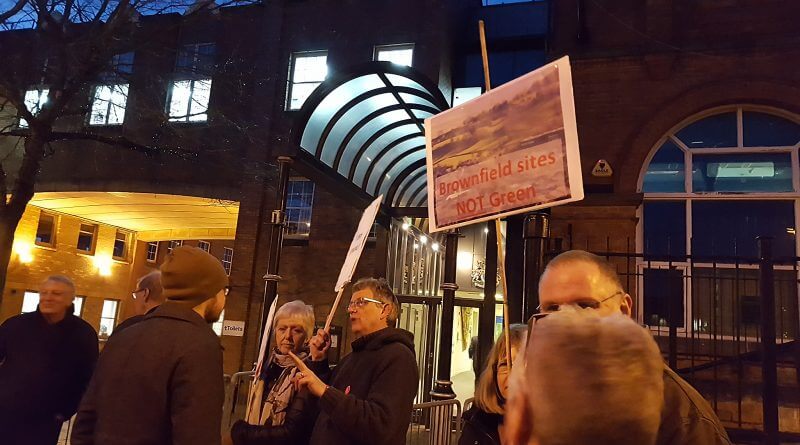 At the meeting of the full Council last night (Wednesday, March 1st) councillors voted in favour of the new draft local plan, which will now be put forward to the public for a six week consultation period.

Prior to the meeting several local groups, including Transition Belper and the Green Party, gathered outside the building to protest against the Local Plan.

Belper resident Leo Swarvett said: “I feel betrayed by the councillors, there is a massive opposition to the plan and they have decided to include these two areas in the housing plan.”

Opposition continued inside with residents from Belper and Crich questioning the draft Local Plan during the public speaking part of the meeting.

Mr Large from Protect Belper spoke historically on the previous Bullsmoor applications and stated that they would be challenging the new consultation: “Protect Belper anticipate engaging in it most positively, we will then look forward to the Council meeting of May the 17…we will also expect consistency recognising that all of the grave heritage concerns that led to the 2016 decision remained the same.”

Ann Smith spoke on the impact of developing on Belper Lane and Bullsmoor. She noted that out 29 UK designated World Heritage Sites two (Edinburgh and Liverpool) were being investigated by UNESCO. Punitive measures can be dealt by UNESCO and she reminded the room that Dresden lost its status. She urged the Council to “vote against the damaging proposal and look to more sensible sites outside of the World Heritage zone to preserve our high profile World Heritage status.”

Sue MacFarlane asked councillors to think about those they represent before voting. She stated: “I would ask you to consider not voting to put forward a Core Plan proposal which includes building on Green fields when there are lots of Brown field sites are suitable for development.”

Cllr Margaret Lane and Christine Bryan from Crich spoke on the challenges to the area, particularly how development will increase road congestion, lack of housing for elderly residents and challenges to local services. 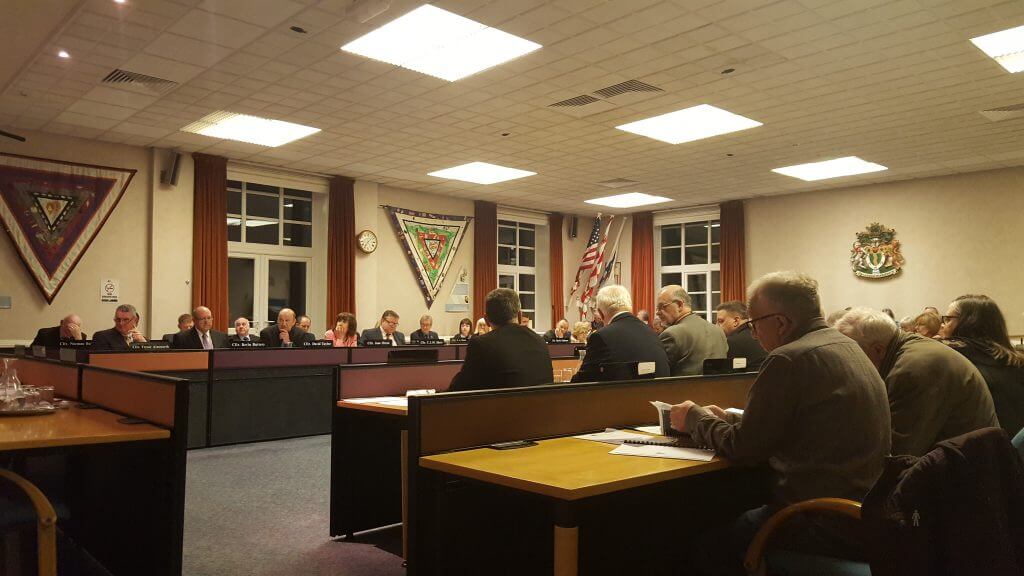 After the public speaking the Deputy Leader Cllr Trevor Ainsworth began by outlining the agenda item in question (10.a), commenting that 23 sites have been selected with the aim of building 11,700 homes by 2028. He talked of the need for housing within the area and stated that there will be seven meetings for the public around the borough to discuss the draft.

Cllr Kevin Butterly then highlighted the difficulties and frustrations both parties have faced in the past delivering a Local Plan and the pressures from the Government to deliver more homes. “No Local Plan means councillors will not be protecting their town or village they will actually be exposing them to a free for all planning process.”

Cllr Martin Tomlinson spoke on the traffic congestion in the Kilburn Road area, previous consultations on Bullsmoor and increased pressure on local schools. He supported the paper going to consultation, but questioned his long term support. Cllr Jackie Cox (Belper East) welcomed the consultation and advised that members voted on the paper and then used the process to have express their views.

Cllr Dan Booth suggested that the councillors and members of the public may have misunderstood how the process works. On Bullsmoor he spoke at length, saying: “I still have grave concerns about the suitability of that site for any development whether that be for housing or for industry. I will continue to raise those concerns as I have over the last couple of years.”

He added that the new plan was different to the old one and that despite frustrations the members should vote for the consultations.

“Without a strategic plan we affectively have no way of protecting any of our sites – not just Bullsmoor, not just Belper Lane, not just Crich but every single site.”

Cllr Paul Jones questioned Leaders position on the consultation and argued for “Right Houses in the right places.”

Cllr Neville highlighted the important and “crucial work” of Neighbourhood Plans and suggested that these had been overlooked in the Local Plan.

Labour councillors from Belper (Ben Bellamy, Maurice Neville, Eric Johnsen) moved an amendment to have Bullsmoor and Belper Lane removed from the Local Draft citing the findings of the AECOM housing needs assessment and Belper’s draft Neighbourhood Plan built environment and housing document. The amendment did not pass .

Cllr Trevor Ainsworth concluded this part of the agenda by highlighting that out of 19 sites only 2 were selected in the Belper parish. He warned members that voting against the plan meant a potential 1900 houses could be built in Belper.