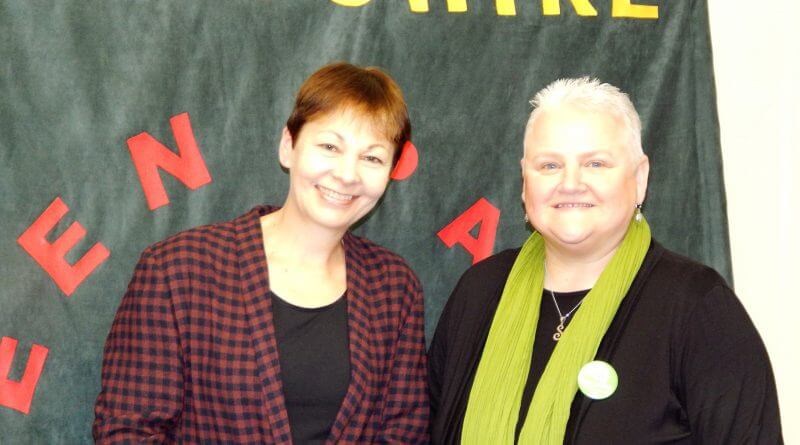 On Friday 3rd February, Caroline Lucas came to visit Duffield and Belper to support Sue MacFarlane, who will be standing for the Green Party in the Duffield and Belper South ward in May’s Derbyshire County Council elections.  Sue took the party’s co-leader (the other being Jonathan Bartley) to Ecclesbourne School in Duffield for a brief talk and question and answer session and in the evening she met with local Green Party members and “activists” (campaigners and protesters).

Caroline told them that she was very excited to see how energised they were and that she had come to Amber Valley to personally add her support to the “hard work they (were) doing to ensure a good quality of life for people in the county”.

Caroline was good enough to set aside some time to talk to Nailed about her visit and current Green Party focuses.  She had some interesting things to say:

Can you tell us about your visit to Ecclesbourne today?  It was a question and answer session wasn’t it?

It was a great response. Yes, I talked for ten minutes and then they asked questions.

What did the students seem to be interested in?

Well we talked a lot about energy actually.  Climate change, Trump, nuclear power – quite a lot about that, and they’ve been going through the (Green Party) manifesto and wanted to know how realistic policies were as well – so we had quite a lot about vision versus practicality and how you can combine the two together.

There was a really nice question from a representative from the Youth Council. He was saying that their two priorities are Votes at 16 and changing the voting system, but he was also asking about Curriculum for Life (Personal, Social and Health and Economic Education – PSHE) and that was just such a lovely question because I have a Private Member’s Bill that I’m trying to get support for making PSHE mandatory on the curriculum because I think that it’s just such an important thing.

Is PSHE not currently mandatory?

You have to teach sex education, but you only have to teach the mechanics of how you do it.  You don’t have to teach anything around relationships and emotions and PSHE of course is much bigger than that, everything from bullying through to managing your money through to LGBT issues and so on.  So that whole gamut of stuff certainly isn’t mandatory.  It’s a postcode lottery as to if you get it at all or if you get quality, so if you made it mandatory that would also kind of feed back into teacher training because then you’d get more focus on teacher training, Ofsted would be reporting on it more and therefore the quality of it would be increased.  I just think that schools are more than just exam factories.  Schools should be about getting the most of everybody’s potential, whether that’s academically or in any other way.  Confidence building and whole person development is really important.

Do you have much support for that from other parties?

Yes!  I mean, the frustration about it in a sense is that there is a lot of support for mandatory PSHE from everybody except it seems, first of all David Cameron and now Theresa May and we’re not quite sure what the blockage is because when you’ve got such a spectrum of groups supporting it – everybody from Girls Guiding and Scouts through to the Confederation of British Industry ALL support it, I mean the CBI supports it because they think it allows people to be more confident, more articulate, more socially rounded and that’s what they need for work as well as the people who’ve got all of the more traditional qualifications – so given the breadth of the spectrum of the people who support it it does seem very odd to me that the government doesn’t.  Parents wants it, students themselves want it, teachers would quite like it as well.  Hopefully, that coalition working together will get that onto the curriculum.

When is the Private Member’s Bill being submitted?

Well it was filibustered out a couple of weeks ago so I’ve got to resubmit it again in March.  It is so infuriating that the parliamentary process is allowed to (filibuster), I think it brings parliament into direpute when you basically see a handful of Tory MPs who are JUST filibustering to stop you getting to change things.

So was this bill the thrust of your visit, or are you here on a multitude of issues?

It was, in particular, to help give support to the Amber Valley Green Party, which is really growing.  They basically broke away from the Green Party because they got so big, which is a great thing.  So it’s about hopefully doing what I can to support them, but with an eye to the main council elections and obviously supporting Sue’s wonderful campaign in Duffield and Belper South. Doing all we can to make people realise that even one Green candidate, just one, can make a huge difference.  I was a sole Green councillor for a while in Oxfordshire many years ago and with even just one, you can put issues on the agenda that wouldn’t otherwise be there.  When it comes to the borough next year, it is so tightly balanced between Labour and Conservative that you can actually swing votes but even in the cases where you can’t do that, you can act as the conscience of the council, you can make sure that there’s a strong social and environmental angle to everything that is being discussed.  So we’re really keen to get that first foot in the door.

It was mentioned that the meeting tonight focussed on activists.  Is that action for the Green Party or against current politics?

Yes, what we want to do is get people to feel comfortable about taking the next step, for example so that people don’t think that canvassing is a lonely thing that you go off and do on your own and that you have to be an absolute expert on every policy in the manifesto before you go out. We want to give people the confidence to know that actually to canvas, being a listener is probably more important than being someone who can divulge the entire manifesto overnight. We always say that those people canvassing on the doorstep who don’t know the answers are actually very useful because it gives them opportunity to say, actually can I just take down your details and I’ll get back to you, which is a lovely way of getting data from that person, and you can then contact them by email maybe, and you can get them answer to their question.  So it’s about getting people on that journey, people are on a journey with political parties essentially aren’t they?  They might just join up and they might come to one meeting and then perhaps you might persuade them to deliver a few newsletters and it’s about how you bring people along so that they can really make the most of this.

So would you say that tonight is about motivation and tactics?

Yes, I mean these are pretty dark times aren’t they? So it’s also about finding a bit of hope between ourselves because with what’s happening with Trump in America and with this extreme Brexit that Theresa May is driving us towards as well.  It’s a good time to be taking comfort from one another and reminding ourselves that by working together we can make a difference.

What are your hopes for the Green Party onwards?

Well our first hope is to get that first seat on the county council in the elections in May. Already Sue and the local party are on the doorsteps finding out what are key priorities for people, and it’s very clear that transport issues, for example, and access to a good public health service and affordable housing and development on green belt land are all big issues. So those are some of the issues where we’ve got some very strong policies and what we want to do is persuade enough people at that next election in May is a really practical way of bringing some of those policies onto the table and hopefully push the other parties to implement them.

“It was really great that Caroline Lucas took some time out of her busy schedule to visit Duffield and Belper. She was pleased to be able to spend time with the young people at Ecclesbourne School, and was impressed by the questions they asked her. All the things that the people of Duffield are telling us that they are concerned about are things that are important to the Green Party, and it was good to have Caroline talking to the young people who live here about them. For me, it was heartening to hear her talk about her journey to being the first Green Councillor on her local council. It was great to spend some time with her, and share our campaign plans with her. She was delighted to meet local activists and thank them for all their hard work in the area. A really great day!” Sue MacFarlane