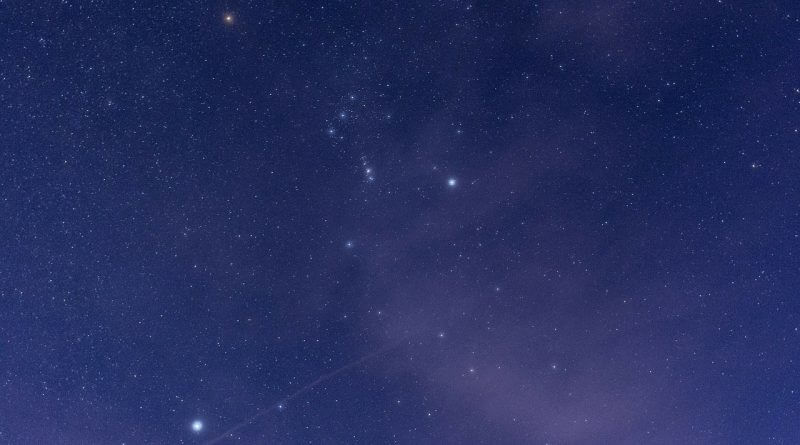 Belper seems to have spent most of January under a blanket of cloud and fog, let’s hope that February gives us more clear nights. If it does there is plenty to see in the night sky for February: Venus shines like a beacon in the early evening, twinned with the red planet Mars; Jupiter will make its first appearance as an evening object and the International Space Station will be joined in its trajectory by the HTV space vehicle early in the month (February the 3rd and 4th).  More challenging observations include the penumbral lunar eclipse, a chance to view Uranus, and the possibility of spotting Comet 45p.

If you are new to astronomy February is a good opportunity to learn about the night sky. Orion the Hunter is one of the most recognisable constellations and, as it is prominent throughout February, it can easily be used as a signpost to other constellations and their brightest stars. There is a good guide on how to use Orion here:  Society of Popular Astronomy Sky Guide

The Earth’s shadow consists of two main parts a dark shadow (or umbra) and light shadow (or penumbra). A penumbral eclipse is when the lighter part of Earth’s shadow crosses across the moon. The effect is very subtle and produces (at maximum) a slight darkening or shading of the northern part of the moon. It is not as impressive as an umbral eclipse, but, as the moon is full on the 10th of February, it may be worth seeing if you can spot the effect. The eclipse starts at 22.34 on the 10th of February and reaches its maximum after midnight, at 00.44am

Venus is very impressive at the moment, shining brightly in the south-west just after sunset. The planet is so bright that it can even be seen through low mist! It will maintain its brightness throughout February and will climb higher in the evening sky. As in previous months there are some nice conjunctions with Mars and on the 10th of February the two planets will be at their closest. Venus is worth looking at through a telescope because like our moon it goes through phases and, for most of February, it will be going through a crescent moon phase.

Jupiter is gradually becoming an evening object and towards the end of the month will start to rise from 10.45 pm onwards. Looking towards the south-east, Jupiter is visible in the constellation of Virgo just above the bright star Spica. I went into some detail about Jupiter in January’s article. It is one of the more pleasing planets to view in a small telescope and even a pair of binoculars (10 x 50s or similar) will show it as a small disc and reveal its largest moons.

Mars is still visible in the south-west after sunset and will climb higher in the sky throughout February. There are nice pairings with the much brighter Venus up to mid-February, and this allows us to contrast the redness of Mars against the bright white of Venus.

On the 26th of February it is possible to find Uranus by using Mars as a marker. Look towards the south-west, after sunset, where Mars will be obvious as a reddish “star”. A good pair of binoculars or a small telescope will reveal Uranus only slightly apart from Mars and in the same field of view. Look for a blue / green, small disc to the lower left of Mars.

The Hyades and Taurus

The Hyades are an open cluster of stars that lie in the constellation of Taurus the Bull. The cluster contains hundreds of visible stars that are connected by, origin, age, chemical composition and their motion through space. The cluster is best seen in binoculars and can be found by focusing on the red star Aldebaran  (the “Bull’s” eye). Aldebaran marks the top of a “V” shape that delineates the face of the “Bull” and shows the brightest stars in the cluster. You can easily find Aldebaran by using the stars of Orion’s belt as a guide; they point directly to the red  star. See the guide here: How to find the Hyades star cluster.

The International Space Station is now visible in the early evening in a time slot between 5.30pm and 8.00pm. It is only visible for a couple of minutes but on most evenings you will be able to see it pass twice (separated by about 95 minutes).

On February the 3rd and February the 4th we may be able to see the HTV space transport vehicle as it tracks the orbit of ISS. The HTV is an unmanned vehicle that carries cargo and supplies to the ISS from Earth. On Friday 3rd of February the HTV will make 2 passes. At 6.09pm it will appear from the south-west, travelling towards the east; on this pass it will be visible for 4 minutes. The HTV then returns at 7.44pm, travelling west to west-south-west, where it will remain low in the sky and will only be visible for less than a minute. On Saturday the 4th of February the HTV will appear a couple of minutes before the ISS at precisely 6.40pm in the west-south-west and travelling east. ISS is then scheduled to appear at 6.43pm and will follow the same trajectory.

Check Spot the Station for the precise time and direction for the space station and the HTV.

For those who like a challenge it might be possible to view a comet this month. Looking towards the south-east from the early hours of the morning, Comet 45p should be observable through binoculars as a small fuzzy blob. The comet cannot be seen with the naked eye, and will become fainter later in the month.  If you want to have a go at spotting Comet 45p here are some charts of its position in the sky in February:

The British Astronomical Society: Comets in 2017

The Belper Astronomy Group continues to meet in the Queens Head, Chesterfield Road. The group consists of like minded people talking about astronomy and related topics over a drink or two. If the nights are clear there are opportunities to observe from the “patio” outside the Queens Head. The BAG meet on the 1st and 3rd Thursdays of the month from 7.30 pm onwards, and the next meeting is scheduled for the 16th of February. Check out their ever expanding facebook page here: Belper Astronomy Group.