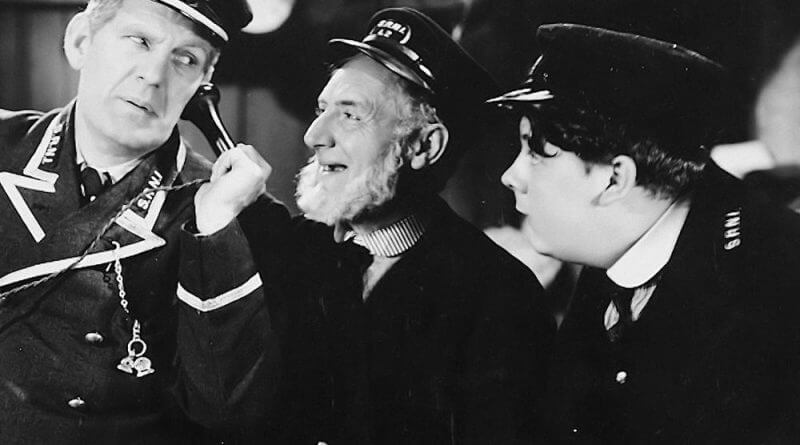 From Timothy Dalton to Suzy Kendall and Alan Bates, Belper has long been punching above its weight in the showbiz stakes. And one of the earliest feathers in our cap (which is actually so well-covered with feathers that it would make excellent head camouflage in a feather warehouse) is the justifiable claim to have launched one of the very biggest stars of the Thirties and Forties…

Will Hay was born and raised in County Durham. A natural linguist, he became fluent in German and French while still in his teens (he later added Spanish, Cantonese and Latin. Just in case…) and found work as a translator for a Manchester engineering firm. Marrying young, at 19 and starting a family shortly after, everything in Hay’s life looked set to follow a safely middle-class, white-collar  model until a night at the Music Hall and falling under the corrupting power of W C Fields.

So impressed was the young Hay by the great comedian and juggler (and legitimately so – catch a glimpse of his act below)  that he decided, to the massive disapproval of his family, to embark upon his own career in the Halls.

A handful of local, semi-professional appearances went well enough for him to look at going full-time, but for that he needed to throw himself into the very heart of the Variety World. Webster’s Variety in Manchester? The West End? The Glasgow Empire? The Folies Bergère?

Or a tent off Field Lane?

In 1910, Will Hay signed an eight month contract to appear at the “Pavilion” in Belper.

Popular history (and “The Good Old Days”) gives us an image of the Edwardian music hall as a palace of sumptuous velvet swags, gilded rococo decoration and well-heeled audiences in jolly striped blazers, big hats and magnificent facial hair. The truth was often closer to what was found in Belper: a tiny stage in the back room of a pub, the function room of a hotel (like the one that occupied what are now the Amber Valley offices on King Street) or the “Pavilion” – a temporary marquee on the site of the town’s cattle market (directly behind the Lion Hotel), with straw bales for seating, a bar set up on trestle tables and a rough stage lit with oil lamps.

With his wife, Gladys, and baby in tow, Hay appeared at the venue during market days as a comedian, singer and “Cornerman” – a cross between Master of Ceremonies, commentator and heckler. He also appeared at other venues in the town when the market wasn’t on. Given that he spent most of 1910 appearing just about everywhere in Belper, it may be fair to imagine that local audiences were probably sick of the sight of him by the end of his contract, but evidently that wasn’t the case: He was given another contract – this time for ten months – the following year.

The family had taken rooms at Wellington Court, which is still there behind Frearsons, during 1910. When he wasn’t on stage or building props, or doing the accounts, or rigging lights, or any number of other jobs that needed doing, Will was writing new material – a fresh closing sketch and a “burlesque” (a topical, satirical song) every week. For 1911, the Hays rented digs at Green Hall, off King Street;  and it was here that Will set about creating the earliest version of the comedy persona that would set him up for life.

Green Hall (Green Lane car-park now occupies the site where it once stood) had been built as a rather grand home for Jedediah Strutt’s grandson. After a spell as a prep’ school, the hall was converted to a lodging house, and it was here that Hay wrote a sketch called “Bend Down”.

He played a harassed schoolteacher plagued by cheeky schoolboys and a mad, ancient school caretaker (played by Gladys). That character – the incompetent, short-tempered, corruptible teacher – was to become Will Hay’s stock in trade (Just as the schoolboy and caretaker were to provide a comfortable living for regular sidekicks Graham Moffatt and Moore Marriott).

By the 1920’s, he was a huge star of the Variety circuit. Radio followed, and a series of hugely popular films in the Thirties and Forties put him at the top of the showbiz tree.

Not that showbiz was the whole of his world. Besides Hay’s lifelong fascination with linguistics (he translated a number of Moliere’s plays into modern vernacular), he was a keen amateur pilot (he’d built a glider in 1909. Gladys was very tolerant…) and a noted astronomer – making a number of his early observations from Middleton by Wirksworth. His 1933 discovery of a “Great White Spot” (a storm) on Saturn was hailed as an important observation, and his construction of a micrometer for charting the course of comets was praised by colleagues from the Royal Astronomical Society.

2 thoughts on “Belper: Nursery Of The Stars”