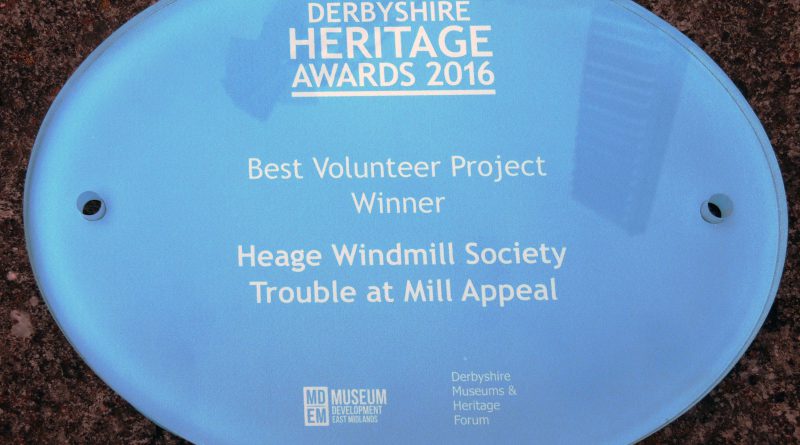 The Derbyshire Museums & Heritage Forum invited museums or heritage sites to enter one or more categories of the 10th Derbyshire Heritage Awards. One closely contested category was for the ‘Best Volunteer Project’ and the awards were made at a gathering held at Crich Tramway Museum.

The dedicated effort made by volunteers at Heage to get the windmill quickly back in action after wet rot was discovered in the cap structure through TAMA (Trouble at The Mill Appeal) was offered as a candidate for this category.

The event was attended by Angela Ward, Chair of the Friends of the windmill, Lynn Allen representing the fundraising team and Alan Clark, who was one of operations team, both teams being set up to deal with the emergency following the discovery of wet rot in August 2015.

Angela Ward said: ‘It was quite nail biting as I think we were in the most contested category and I believe there may have been 6 or 7 all worthy contenders (but apparently not as worthy as us!). When Andy Potter (Radio Derby) announced the winners as Heage Windmill I felt so privileged to represent the Friends & Volunteers of the Mill, such an excellent team of hardworking, committed and enthusiastic people who give their time freely to ensure that the “Old Lady” keeps turning for everyone to enjoy and the award was just  the icing on the cake after a demanding time getting her better!”