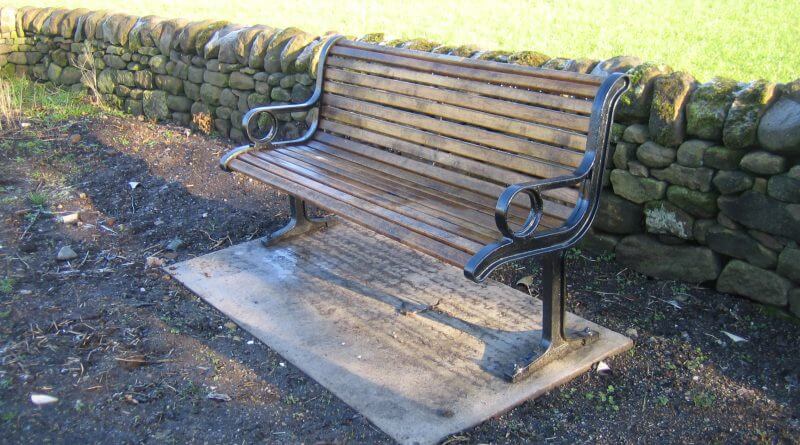 In 2006/07 the Dally Wash well site was completely overgrown and covered over by trees. But when locals discovered stone slabs and one upright stone post, Derbyshire Archaeological Society were invited to investigate, and the well was re-discovered.

A process of restoration then commenced, thanks to the Friends of St. Faiths and the Heritage Lottery Fund, and today residents can see the result. By restoring the well, they hope that it will again be a place for people to meet, and for quiet contemplation, for many years to come.

You can see the before and after photographs below:

What is the History of Dally Wash?

It is thought that Dally Wash may be a ‘spout well’, because there was once a well on the opposite side of the road and a little higher up. It may have been constructed to redirect the natural water supply to a more accessible location. The elaborate double steps are a most unusual later addition, which must have been expensive.

At the very bottom of the steps (below the present water level) is a circular, stone-lined well, older than the rest of the structure. Once this would have looked like a simple wishing well, with a bucket and winding mechanism on top. It may have just been used for drinking water, and may have been used by a smithy that was nearby.

The Well and the Road

Dalley Lane was once a medieval road. In 1756 the lane became a ‘turnpike’, replacing the former Roman road and later pack-horse trail along the ridge top, and was managed by a local trust. Tolls were collected a few hundred yards north at Toll Bar Farm (now Gorses Farm, inhabited today by Betty Cowan who has led the project to get the well restored), and these were charged right up to 1872. Since the Wash is so close to the road, it has been suggested that the site was used as a stop-off for stage coaches, to cool off the wheels with water and give the horses a drink.

This piece of land was outside the area of ‘enclosure’ shown on the 1789 map, suggesting that it was used by the public. The Wash is shown on all maps after this date. One map shows small buildings next to the well, which may have been shelters for watering troughs. But the Derby Mercury in 1878 reported that ‘Dally Well’ was ‘in an unsatisfactory condition, and the water unfit for domestic purposes, being full of decayed vegetable matter’.

After 1880 the site is shown on maps as a ‘pump’. By this time, the steps and well were covered over, and only a lead pump would have been visible. By 1891 (the year St. Faiths Mission Church was built nearby) the road was no longer used as a main route, having been replaced by the current A6, and its width was halved.

The Wash was used as a pump until the late 1920s when Belper Lane End received a piped water supply. It was then completely covered over and all but forgotten.

What we can be sure of is that Dally Wash has been visited by the people of Belper Lane End and travellers for hundreds of years. It was a place where people met, and paused for conversation whilst gathering water.

If you would like to see for yourself and find out more about the story, come to the celebration event at Dally Wash at 2pm on Saturday 25th June. Cream teas will be served afterwards at St. Faiths, just a few hundred years away. Then at 7pm the next day, Sunday 26th June, there will be a talk on the significance of the restoration of Dally Wash, as part of the ecumenical evening service.  All are welcome.