A part of the election on Thursday 5th May is to elect a new Police and Crime Commissioner.  A lot of people don’t really understand why we have to do this and it is yet another aspect of this election year that the electorate find difficult because it’s relatively new and the candidates don’t campaign with the same public presence as the council candidates.

The election of Police and Crime Commissioners was introduced in 2012 when Police Authorities were abolished by the ConDem coalition with the Police Reform and Social Responsibility Act.  It was a campaign issue for both the Conservatives and the Liberal Democrats to reform or replace the police authorities, which they both believed lacked accountability to the communities they serve.

Unlike Commissioners, who are high ranking police officers at the London Metropolitan Police, Police and Crime Commissioners are not part of the police, are not guaranteed to have experience in policing and are tied to political parties, forcing party political ideology onto police oversight, in direct contradiction of the oath of impartiality which a PCC must make.  In 2014 the National Audit Office found that there were “few checks and balances” on the role and that the Police and Crime Panels which scrutinise PCCs (and inform the public of their conclusions) have little power to do anything about what they discover (they can suspend a PCC if s/he commits a serious crime).  The change has politicised the function but we still have to vote for who politicises the funding of the police and the assessment of their efficiency and effectiveness.

Here are our choices for Derbyshire:

Mr. Yeowart, who is a former police officer, did not provide a statement to the official Choose Your PCC website but stated on ITV that he wants to use social media and have lots of meetings.  His most public presence is Twitter which is dominated by anti-immigration posts and features this confused paradox: 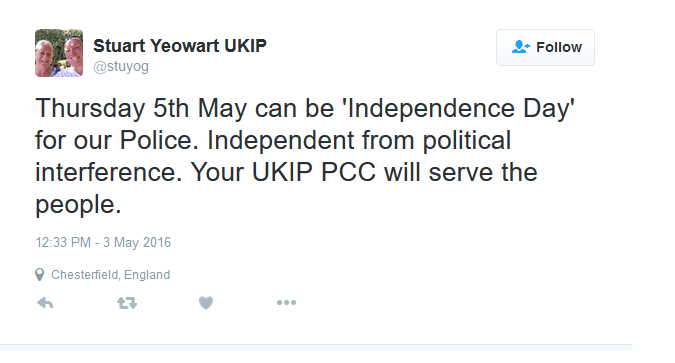 Belper voters might like to consider whether they want the police run by the same political party currently in control of the country and being protested against.

One thought on “Election: Police and Crime Commissioner”