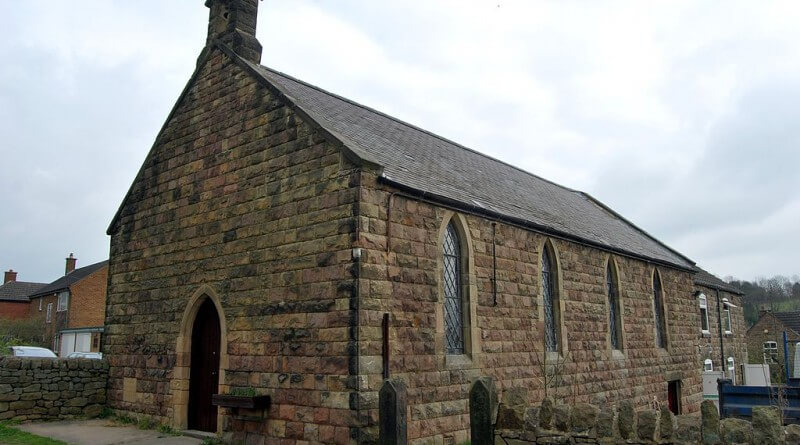 This month (and for the next few months) the community of North West Belper are celebrating the 125th anniversary of St. Faiths, which was first opened on 24th April 1891. St. Faiths is a former Anglican chapel in Dalley Lane, close to the top of Belper Lane, now a multi-purpose community hall and ecumenical place of worship.

In the late nineteenth century, Dalley Lane had been recently declassified as the main road between Wirksworth and Derby, replaced by the present A6. This left the thirty houses and farms of Belper Lane End as a sleepy little hamlet, separated from central Belper by a couple of miles and belt of countryside, with a separate character of its own. The Bulls Head, once a busy coaching inn, like today’s motorway service stations, was now a place for a ‘quiet pint’. There were just a few small shops at intervals along Belper Lane, of which only ‘Hilltop Store’ remains today.

But Lane End had no place of worship, and the locals were not often seen in the Belper churches down the hill. This fact was picked up by the early Methodists, then in their evangelising hey-day. In this period the Methodists were preaching every week in every town and village, attracting regular listeners, then building chapels for regular worship and Sunday School. In 1830 they began a weekly preaching place at Belper Lane End, but it was hard going, and after a long and slow start, Lane End Chapel was built in 1849. The first Sunday School there did not start until 1856.

The Parents of St. Faiths

The parent organisations which together planted St. Faiths Church were Christ Church and the Anglican Convent of St. Laurence, then headed by Fr. Edward  Augustus Hillyard and Mother Ellen respectively.

Christ Church had been founded in 1850 as Belper’s second parish church, at a time when Belper was growing rapidly due to the textile revolution. It had a different character to St. Peter’s Church (opened 1824), as it was influenced by the Oxford or Anglo-Catholic movement, and this affected the design of the church and the form of the services, with an emphasis on liturgy, symbolism, incense and vestments.

In 1876, Edward Hillyard came from St. Laurence’s Church at Norwich to be the Vicar of Christ Church. Within a year, the little band of sisters who had formed at Norwich also moved to Belper. They first lived in a house called ‘The Lawns’ on Nottingham Road, then in the doctors house on Bridge Street (now Riversdale surgery), where they started their first school and orphanage, then in 1885 the large convent that many of us remember was built for them in Field Lane.

Perhaps surprisingly, the church under Hillyard, together with the St. Laurence nuns, decided to plant a second church at Lane End in 1879. This was no competition with the Methodists, but a recognition that there was a ‘mission field’ there and that more resources were needed. There was a good spirit of partnership in this, which is seen in the way that they went about it, and bow they were received. The first services were held on Wednesday evenings in the Lane End Methodist Chapel, and the same year, a united mission was held, with both Anglican and Methodist preachers.

Finally in 1890 a plot of land was purchased in Dalley Lane, the foundation stone was laid in November, a chapel was constructed in just five months, and the first service was held on 24th April 1891. It was intended as a ‘mission church’ for Belper Lane End and the surrounding area, and as a ‘school-chapel’.  The objects were to preach the gospel, to teach children, and to provide a local place of worship for the community, working in true ecumenical spirit alongside the local Methodists of Lane End Chapel, where they too had met for eleven years.

After 1928 the curacy was abolished, and as Christ Church no longer had the ministerial resources to service St. Faiths, the vicar (Father Walker) permitted the nuns to lead the evening services. Thereafter, two nuns walked up the hill every Saturday evening to prepare St. Faiths for Sunday, spent the night at the adjacent cottage, and returned to the convent after the evening service. In the 1940s there was a great demand for housing, so the nuns rented the cottage out, and spent their Saturday nights instead in a large shed alongside St. Faiths – quite a sacrifice.

In the 1960s St. Faiths at last got its own curate, in the person of Rev. Basil Wesson, and the nuns were able to surrender their role, though they continued to attend the services and to stand in when needed. Basil Wesson now took responsibility for all services and the Sunday School. In the Wesson years there was also a church youth club, and the adjoining cottage was converted to a church hall and used for various social and community activities.

The Work of the Nuns

For its first twenty years, St. Faiths Sunday School taught not only scripture but the ‘3 Rs’ of Reading, Writing and Arithmetic, and life skills, to children who had no other schooling then and may have worked up to 6 days a week.  The nuns faithfully run this Sunday School for 70 years, endearing themselves to the community, frequently visiting parents and families and offering pastoral support and kindness.

But twice in their history, the St. Laurence nuns had to give up their main work, which they had done so well, due to new national legislation, standards and requirements. The Liberal government of 1906-10 paved the way for ‘universal’ state primary education, compulsory for all young children up to the age or ten, and after 1912 the St. Faiths Sunday School became the sort we still recognise today, simply teaching children the scriptures and the Christian life. Thereafter the main work of the Convent was the nursing of the elderly and terminally ill, who they called ‘the treasures’ (a term first used by their patron Saint Laurence over 1600 years earlier).  This they did for almost eighty years, until a new requirement of specialist training and qualifications forced them out of this work also. From the 1990s, they opened up the convent to visitors of all ages, in the form of contemplative retreats and ‘quiet days’, giving hospitality and leading Christian meditation.

The early noughties sadly saw the death of the St. Laurence Convent, and St. Faiths Church, and its minister. First, in 2001, the five remaining nuns reluctantly left Belper and moved to a house in the grounds of Southwell Minster. The convent was turned into apartments, and more small houses built in the beautiful grounds, appropriately named ‘St. Laurence Gardens’. Next, in 2003, Basil Wesson died quite suddenly, and was sadly missed. Again the church was then served by preachers from Christ Church, and again in 2004 the church decided that it did not have the resources to do this. But this time there were no nuns to take over the services, and the last service was held in April 2005, after which the church was closed.

St. Faiths then remained closed and empty for seven years.  But it was not the end. A support group of former congregation members and other community members, called the ‘Friends of St. Faiths’, campaigned for it to be re-opened. When it became clear that it could not again be an Anglican church, the group began to turn their thoughts to how it could be restart as an independent Christian church.

And in early 2012 the building was bought by a sympathetic individual, and re-opened. And so it was that in April 2012, the first service for seven years was held, with a euphoric congregation. And services have been held there ever since, on the last Sunday evening of each month, with a few extras. These are mostly Anglican in character, but are ecumenical in composition, supported by Christians from all the mainline denominations in Belper. Congregations vary from around 25 up to 50 on occasions, and there is a warm and welcoming atmosphere for all who visit.

The re-opening of St. Faiths in 2012 coincided with the unearthing of the ancient well Dally Wash by Derby Archaeological Society, just a few hundred yards away. Since then the well has been restored by the Friends of St. Faiths with the support of the Heritage Lottery Fund and Severn Trent Water. It is now landscaped, with metal railings, gate, naming stone, and a bench commemorating Rev. Basil Wesson. We plan to also celebrate the completion of this project in June.

The next red letter month was April 2014, when the building changed hands again.   It is now owned by local trustees on behalf of the community, who are committed to ensuring that it continues to be used as intended. It is now a ‘community hall’ – still a place of Christian worship, but also a meeting place and venue for the whole community, able to host various activities and available to hire for social events.

So now it is 125 years since St. Faiths was first opened; we have much to celebrate this April – 114 years of faithful Christian witness by curates, nuns and lay people, and since the rebirth, 4 more years of worship and community life at St. Faiths.

The forthcoming series of special events include the following, and all are invited:

Over this period, there will be a small exhibition entitled ‘Church and Convent’ at St. Faiths, containing various interesting pictures and memorabilia, of special interest to any who remember the old St. Faiths or the St. Laurence nuns.  This can be viewed every time St. Faiths is open between 24th April and the end of June.

The St. Faiths story has been called a modern miracle. It has been described and illustrated in the book ‘Faith on a Derbyshire Hillside’, available £7 from North Mill or Hilltop Store or Belper Bookshop in King Street. It is also available as an e-book on Kindle. The book is full of social history, including nailing, coal mining, cotton mills, turnpike and stage coaches, a chapter on the war years, and even a ghost story.  And of-course plenty on church and the convent. Why not fill in some gaps in your knowledge of local history?

2 thoughts on “Anniversary Of A Very Special Building”