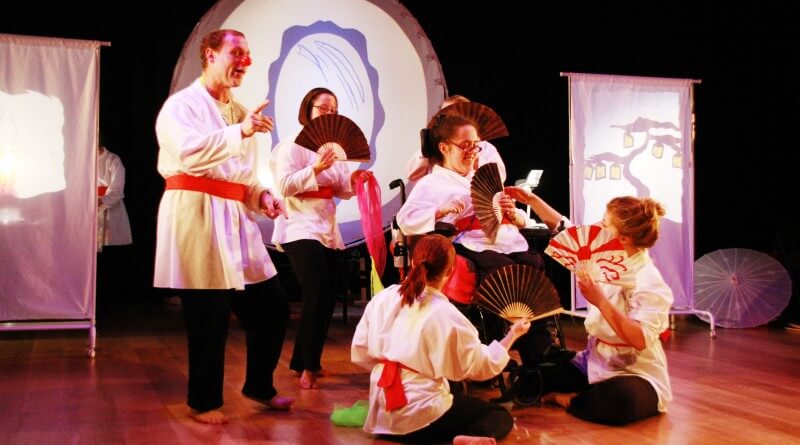 They are the “coolest gang in town” and now Hubbub Theatre Company, take their hit show ‘Kessoku Tales of Togetherness’ on tour across the East Midlands in March 2016.

March 2016 will see Derby’s very own Hubbub Theatre Company, taking their unique brand of high energy mayhem to five prestigious theatres across the East Midlands for their tour of ‘Kessoku Tales of Togetherness’.

Inspired by Japanese stories, Kessoku (meaning unity) is full of fun visual treats, physical theatre, puppetry, shadow projection, live music masks and more. Kessoku tells the story of a mischievous raccoon that disguises himself as a kettle, a beautiful Sun Goddess who hides in a cave, and a baby who was born in a peach!

The Company work as an ensemble of highly skilled performers that invite audiences to be a part of their playful mob. Colourful and unpredictable, they are a gang with an infectious love for invention and inclusivity. Everyone is invited to join in and this philosophy led to the production’s concept and title meaning unity. However, the show’s title goes even further in not only referring to the company’s ethos and attitude. The ambitious production’s unification of traditional Japanese stories, alongside the arts of puppetry, shadow projection and physical theatre all refer back to the show’s core message of harmony and togetherness.

As an inclusive theatre company, Hubbub work with individuals with moderate learning disabilities and support highly talented performers to create accessible and highly professional productions. Kessoku was first performed at Deda in Derby in November 2014 to sell-out crowds and highly positive reviews. Following this success, Hubbub received significant interest from venues across the country wishing to showcase the production in 2016. The Arts Council and Derby City Council have provided grants to make this possible alongside the company raising match funding through their own bespoke work and events.
Hubbub Director Jen Sumner said, ‘’We are delighted to have the support of the Arts Council, Derby City Council and all these fantastic venues. We’re really looking forward to showing our work to a wider audience… Hubbub is quite unique in what it offers and we hope this is just the start of our development in the region and beyond’

The Kessoku tour will include Lakeside Theatre in Nottingham, The Attenborough Centre in Leicester, Lincoln Drill Hall and Burton Brewhouse. As part of the tour Hubbub will also be returning to Deda’s theatre space. There is a ‘relaxed audience’ policy which means that it is OK to make noise or to leave the theatre at any time if necessary. This environment ensures that the show is accessible to everyone, including those who may find it difficult to be in a theatre space under usual conditions.

Deda Director Stephen Munn said, ‘I am so pleased to be welcoming back to Déda Hubbub Theatre Company with the fabulous Kessoku Tales of Togetherness. The show is performed by an amazing integrated cast who tell their story in a unique and fascinating way. The last time Kessoku was here is went down a storm and I am fully expecting the same again this time round.’

To compliment the tour Hubbub will be including local members of the community in the production, by working with local theatre groups, SEN schools and local students from each area, to offer puppetry, performance and shadow projection workshops. Participants will also learn the Easy Peasy Japenesey 1-10 dance routine and have the opportunity to perform in front of Kessoku audience members on show nights.

But this is just the beginning. Hubbub Theatre Company have recently been made a charitable organisation and have ambitious plans to develop the company even further. Soon everyone will be able to join the gang and be part of the mayhem.

For all information about the company and these activities please contact Jen Sumner: hubbubtheatre@gmail.com
Tour will take place at the following venues: