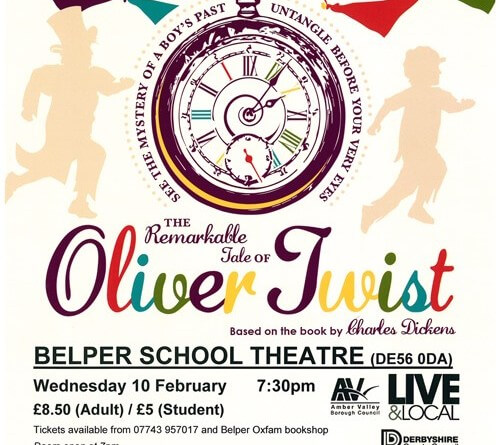 What could be more apt in these days of austerity than the Red Earth’s production of the Remarkable Tale of Oliver Twist? As bloated bankers continue to live large and the average person tries to do their best with ever increasing cuts to pay, can’t we all sympathise with the plight of poor Oliver as he nervously approaches the bloated Mr Beetle for more?

The Remarkable Tale of Oliver Twist was adapted by Red Earth Theatre from the much–loved novel by Charles Dickens. Oliver Twist, Dickens’s second novel, appeared in serial form, printed in 53 weekly episodes throughout 1837 – 1838. Presented in the style of Victorian music hall, with speciality acts and variety entertainments, the cast of only 4 actors used all their considerable skills to play over 20 roles. Indispensable to the show were also the astonishing puppets that added to the music hall feel and left the audience laughing between the darker parts of the tale.

From its inception, the company has sought to make work that is inclusive and accessible for all children and young people, and to develop diverse audiences. Central to the company’s work is the idea of collaboration with people, places and communities as much as with artists and companies. And it showed, as at the heart of the performance was inclusivity. All the actors used sign language throughout, including the gestures seamlessly into their performances. For those who were hard of hearing or not sign language users the company also provided what they called ‘Creative Caption’s’ and additional graphics to improves access.

Swapping roles, gender, costumes and props minute by minute gave the show a nail biting air of nervous excitement and led to some humorous impov throughout. It was a delight to watch the characters dance, fight, squirm and steal their way around the small, but excellently designed Victorian music hall style set. Tricks like the trapdoor up to Fagan’s hideout, Bill Sykes precarious escape and the busy streets of London were all were cleverly adapted considering the limited space.

Most notable was Joey Parsad’s turn as The Artful Dodger, who brought a modern London swagger to the street urchin. Cocky, cunning and full of bravado Dickens’ character is no less relevant today as the character was back in the 1800’s. Roseanna Connolly also shined as much maligned Nancy to Thomas Simper’s brute of a Sikes; the ghostly singing of her lullaby to Sikes over the final scenes adding a much needed weight to villains actions and grim conclusion.

Despite heavy marketing the attendance was somewhat underwhelming given the popularity of theatre in the town. Given the size and quality of the venue one can only hope that future performances in the Live and Local series attract a bigger crowd.

Refreshments were served by B-Hive, the new local group established to promote the development of Eco-Shop in the town with all proceeds going towards its development.

For adults and children of all ages alike the Red Earth Theatre provided a memorable adaptation of Dicken’s classic story that weaved together intrigue, comedy and dynamic stage design in equal measure.

There are two more local showings coming up:

And for the full tour schedule and venue details see: