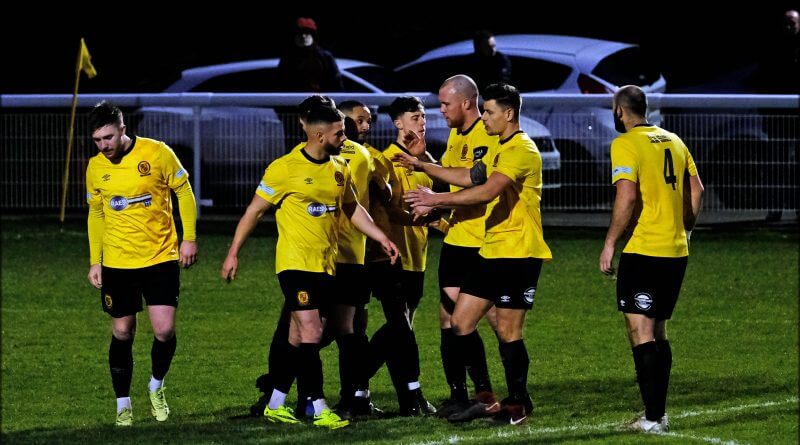 Belper Town are building an impressive unbeaten run again after making it seven games undefeated in all competitions with this narrow win over Sutton Coldfield Town.

It wasn’t one of the Nailers’ most convincing performances and they needed a penalty award to safely see them through for the three points, but the effort and commitment was never in doubt even though they couldn’t convert their superior possession into goals.

The visitors may be residing in the lower reaches of the league but recent results indicated that their position may be a false one, and it would be true to say that had they converted their chances it could have been a very difficult afternoon for the Nailers.  The Belper side included Phil Watt who was making his 150th appearance for the, while Cameron Clark was restored at left back after Craig Nelthorpe’s dismissal at Frickley the previous week.

A rather frustrating first half began with a Danny South header over the bar in the 2nd minute and soon afterwards Derry Robson nudged a close range effort over the top, although in fairness, this was a difficult chance. Kyle Bryant collected the ball in midfield and took it forward and unleashed a low shot past the far post, and Nathan Curtis tried from a similar distance and his effort drifted well wide of its target.

The Nailers survived a scare in the 21st minute when the Royals broke quickly down the left with Chinedu Okoro taking Kyle Bryant completely by surprise with his electric pace, then with only the oncoming Ryan Musselwhite to beat, he seemed to lose his nerve and  sent the ball well wide of the far post. Bryant wasn’t too far a way with a first time shot 10 minutes later and a George Milner free kick caused problems in the Royals’ six yard area but Lewis Gwilliams gathered the ball safely.

The Nailers survived another scare in the 43rd minute when Desean Martin had time inside the penalty area to place his shot but completely messed it up with the ball spinning well wide of its target. George Milner gave supporters some hope in the dying seconds of the half when he burst through and fired a shot towards the near post where Gwilliams was on hand to make the save.

The second period started with an anxious moment for the Nailers when Reece Gibson had a chance to break the deadlock when he wriggled through the Belper back line and toe poked the ball goal bound, however Ryan Musselwhite managed to get across his goal and saved comfortably. Charlie Dawes was introduced from the bench 10 minutes into the second half and worked the goal keeper with a crisply struck shot on 63 minutes.

Evan Garnett also injected a spark into the Nailers attacking effort and in the 69th minute elected to pass the ball rather than have a crack himself as Belper started to get a little anxious that a goal was eluding them. George Milner always looked a likely route to a goal and even though his 70th minute run and shot went wide of the target, he had better reward when he burst into the box in the 78th minute.

This time his darting run to the bye line, and with players waiting for his cross, Royals’ full back Aris Christophorou leaned in heavily on Milner and sent him sprawling. The referee immediately pointed to the penalty spot and Milner promptly hauled himself off the floor and made certain with his penalty kick.

Belper searched in vain for a second goal which would have snuffed out any hopes that the visitors had of equalising, and although it wasn’t as convincing a win as the impressive crowd of 413 would have preferred, it was another important three points that kept them 4th in the league table.