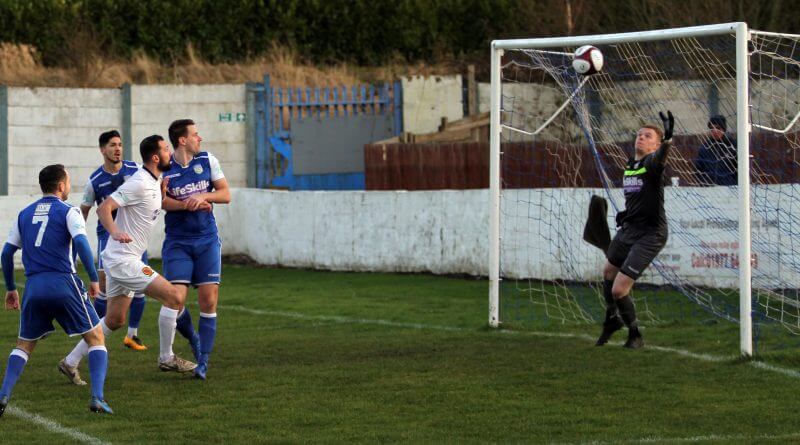 Belper Town overcame all the odds to take a massive three points from Frickley Athletic after going down to 10 men and enduring a floodlight failure in the process.

The Nailers demonstrated huge character and resilience to beat a very good Frickley side and consolidate their position of 4th in the league table. After disappointing draws against Sheffield and Ilkeston, the Nailers needed to win at the Westfield Lane Stadium to keep in touch with Stamford and Leek who are threatening to break away at the top of the division.

Manager Grant Black opted to leave Evan Garnett on the bench and play George Milner from the start with Craig Nelthorpe continuing at left back. After holding a respectful one minute’s applause for Frickley supporter Eddie Allen, the rest of the afternoon produced little respect from either side as the game was littered with fouls, bookings, a significant sending off and a frustrating performance from the match official.

The Nailers made a fantastic start when Alex Peterson| headed in from a George Milner trademark long throw after just 3 minutes, and completely derailed Frickley match plan, but not for long. The hosts surged forward immediately from the restart and levelled the scores when Jacob Hazel scored with a controlled left foot shot in the 11th minute, and the gloves were off for the rest of the game. Neither side created a worthwhile opportunity for the remainder of the half but the foul count grew steadily as both sides threw caution to the wind when it came to rash challenges.

The referee was more than happy to blow the whistle for anything else that he considered against the rules of football which only served to exasperate both sets of supporters. From Belper’s perspective a blatant hand ball on 32 minutes went unnoticed and it came as a relief when the game reached the half way point.  The second period certainly produced more to hold the attention of supporters, starting with Craig Nelthorpe’s sending off for a second yellow card barely 2 minutes in.

Nathan Curtis was sacrificed in favour of Cameron Clark as the Nailers planned how they were going to manage the incessant Frickley pressure that was certain to come. Todd Jordan sent a stooping header wide of the post as they set their stall out and the Nailers absorbed lots of pressure until the 62nd minute when the Westfield Lane faithful were stunned by an excellent Belper goal scored on the break.

Alex Peterson did exceptionally well to control a long clearance in the 62nd minute and turn the ball into the path of the marauding Cameron Clark, He ran through to finish brilliantly past the oncoming Thomas Jackson.   The hosts redoubled their efforts and went close on 71 minutes when Bradley Wells headed just wide, and then 2 minutes later play was suspended because of floodlight failure.

After a lengthy delay in the cold and dark the game resumed and so did the onslaught on the Belper goal. The Nailers were magnificent defensively and for the final 15 minutes they blocked everything whether it was from corners, free kicks or crosses into the box.

It was a truly magnificent display that produced a result that could be crucial in the latter stages of the season.