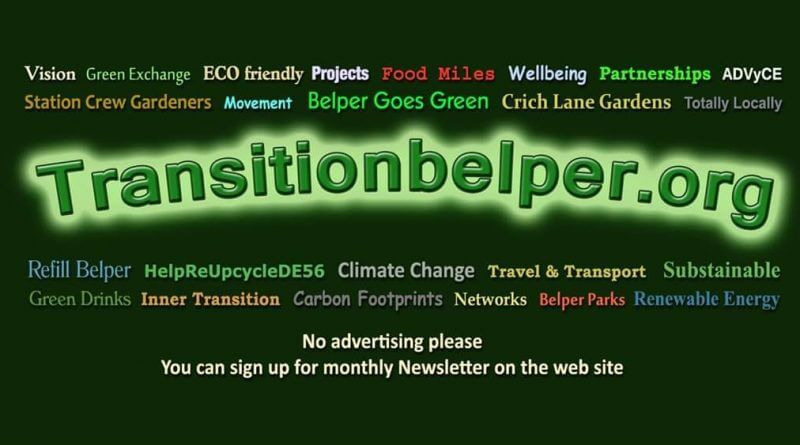 In relation to Pauline Latham’s statement in her election campaign material that she has supported “the initiatives of activists like Transition Belper” the trustees of Transition Belper would like to make the following points:

Transition Belper is not allied to any political group or party.

The Transition Movement, of which we are a part, believes that the correct response to the Climate Emergency is to transition away from a reliance on fossil fuels (generally understood as a policy of degrowth, energy descent and building community resilience). In its activities and projects TB seeks to encourage localised, energy efficient and sustainable living.

Our stance is that, as a non-politically aligned group, we will work with political parties and their representatives wherever possible to develop our projects and to help Belper to become more resilient when faced with the challenges of Climate Change.

However, it should be noted that most of our activities and projects have been achieved independently and mostly through our own funds, fund raising activities, and the commitment of our members and local volunteers.

Transition Belper has been concerned about the Climate Change for a long time and it is gratifying to see the high profile that climate change is now getting from politicians.

However, because we are willing to work across political party lines, we were disappointed that Pauline Latham has decided to link her name to ours as part of her election campaign, presumably for political gain.

We were not consulted about this and, if asked, would have refused on the basis that we do not wish to be co-opted into political party election campaigns.

Her action has caused a lot of discussion amongst our supporters and the trustees. We would expect better from our local MP.

She has chosen to bring an independent and non-politically aligned organisation into her election campaign, seemingly without much thought about the consequences for that organisation and without asking us first.

The trustees of Transition Belper have, therefore, decided that we have no alternative but to make this public statement.

Please note that Transition Belper is not lending its support to Pauline Latham or to any other prospective candidate in the forthcoming general election.