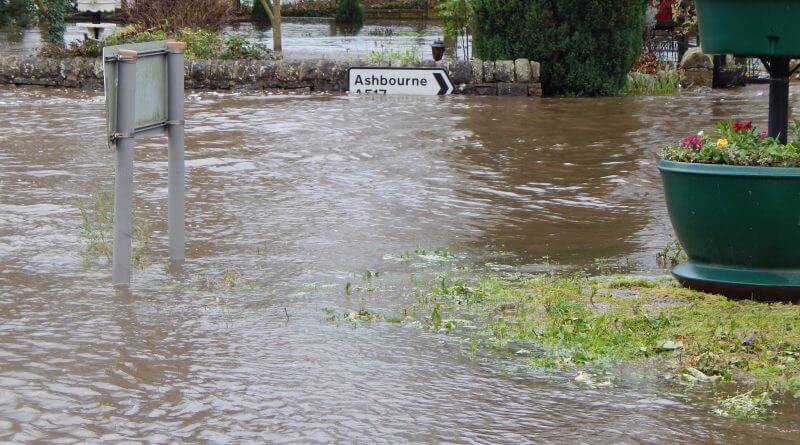 It’s been a hell of a day.  The flood has done the worst to some and brought out the best in many.

It looks like this may be the worst flood that Belper has ever experienced.  In visiting the flood sites which were accessible today, many land owners reported that previous floods have not been this bad.  The big floods Belper has experienced in living memory were 2007, 1995, and 1968.

The Derwent is flooded along its length. Initial flooding took only 20 minutes to change from wet to life threatening.

The greatest spread of flooding looks to be Belper, but Ambergate and Rowsley have suffered a much stronger warning, with the road through the village becoming a lake.  People have been evacuated from a small number of houses in Belper, and some are trapped in the higher level of their homes in Ambergate and other areas.

Matlock town centre is flooded.  In Rowsley, one woman was swept away in the floods, and sadly her body was discovered in Darley Dale between 10 and 11am.

Derby flooded later and saw the bus station close.  As stretches of the A6 had already been closed earlier in the day, in both directions from Belper, there were already people stranded in Derby, unable to get home.  A free bus was laid on this evening to take Belper people home by whatever route was possible.  Young people were stranded from Belper by the lack of buses from John Flamsteed school, and Derby College.

Bridge Foot was closed, not only due to flooding, but due to concerns for the stability of the 18th century bridge, which is suspected to be cracked from the onslaught.  This is still to be assessed.  The road remains closed overnight, with no knowledge of when it will open.  This cuts off the other side of the river, and cuts those living there off from essential supplies.

School children were shuttled across the river in a 4×4 to reunite them with their parents, whilst the bridge was being controlled by the Derbyshire Constabulary and the Labour town and borough councillors to ensure that residents did not risk their lives or further damage the bridge by ignoring the restriction.  Councillors report that there were 2 incidents where councillors were assaulted by angry residents, and 1 where a police officer was slapped.  Most residents have tried to help others and obey safety precautions.  Bridge Foot has been declared safe to pass on foot, in wellies as of this evening, but the peak of flooding was hours after this announcement and caution must be taken.  The road will remain closed to traffic until the county council declares it safe.

The River Gardens is entirely flooded, including the newly laid foundations of the new Swiss Tea Rooms.

Wyver Lane gardens would be indistinguishable from the river, were it not for the tops of sheds poking through the flood water.

As we reported during the day, many roads were closed, effectively sealing Belper in.  Access roads at the top of the valley were open, but some problems with those roads have been reported by members of the public.  We will update tomorrow with which roads remain closed.

Towards Milford, the sewage works has flooded, leading to contaminated flood water. There are warnings for this area.

Pleas have gone out on social media to help horses who are at risk of drowning in several locations along the A38 and A6.  An hour before publication, the RSPCA and police were in attendance, and help from the public was no longer required.  We will update you with the fate of the horses once we know.

Belper Town football ground looks like a gigantic swimming pool.  Whilst visiting the site, a representative of the club told us that this flooding is worse than the last, which caused £100k damage to the clubhouse.  The clubhouse is flooded this time too.

Other sports clubs along the river, including the rugby club, are also flooded, and we assume that they will also sustain financial costs.  Thorntons field and Morrisons field were also co-opted by the river, with fast running water flooding beyond the bounds of the fields, and in the case of Morrisons, the car park was barricaded with a makeshift barrier made of shopping trolleys.

Strutt’s North Mill is flooded, including the museum and Tom Yum’s Thai restaurant.  The security officer for the building closed down the building, and it will remain closed all weekend.

Babington Hospital has been evacuated. 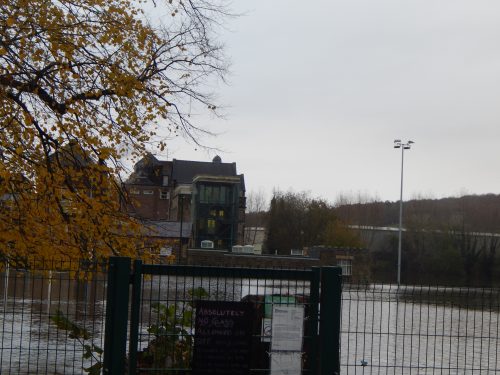 People are asking what they can do to help.  Gwen Tresider responded to locals wanting to help other Belper people by setting up a Facebook help group, dedicated to collecting offers and requests for help.  The group can be found here: https://www.facebook.com/groups/814967385625749/

Within that group, Christine Chambers donated the use of her studio in the offices above the last shops on the left going up King Street (which you enter via the steps to the 2nd level) for the purpose of gathering people to supply help to those evacuated.  At present it is unknown what help might be needed, although some food will be available.  Christine is asking those who can offer help to stop by from 10am onwards so that lists of spare rooms, manual help, 4×4 transport, food provision, showering facilities etc can be collected.  Those in need can also drop by, if they are on this side of the river.  We will update you throughout tomorrow of any needs and available help from this community help.

More rain is predicted for tomorrow.