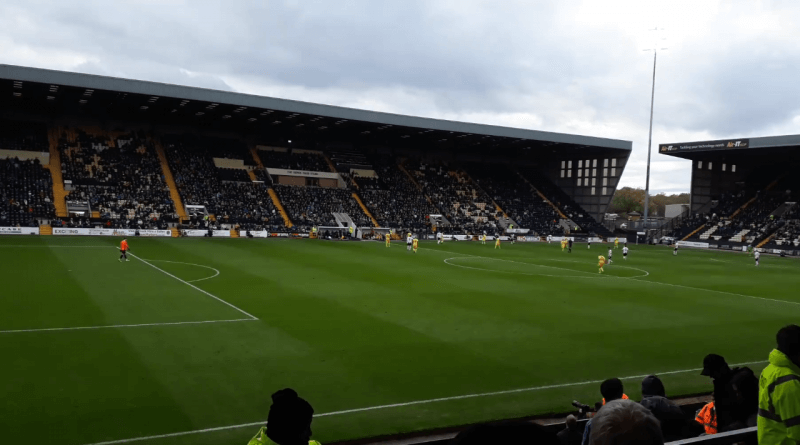 Belper Town’s F A Cup run ended in breathtaking style as the gallant Nailers kept their army of fans spellbound until the final whistle.

The result barely mattered in the end as Belper put on a five star show; nearly forcing a replay in a tie most onlookers would have expected their more illustrious opposition would win at a canter.

The whole cup run has left commentators searching for adequate superlatives to describe the superhuman efforts Grant Black and his team have aspired to over these last few weeks, but perhaps the word that comes closest is – fantastic!

The Nailers had done remarkably well to reach this stage of the competition and when the draw for the fourth qualifying round paired them with National League Notts County, excitement built daily until last Saturday’s fitting climax at Meadow Lane.

With little to lose, the Nailers startled Notts with a bright opening that saw Nathan Curtis win a corner from an attempt on goal within the first 2 minutes of the game.

The hosts quickly responded with a headed effort by Kristian Dennis from Regan Booty’s in swinging cross, however Ryan Musselwhite was well placed to catch the ball comfortably.

The Nailers drew applause for some good approach play moments later and Danny South had Belper’s first shot on target with a toe poked effort that Sam Slocombe collected easily.

The Magpies eased their way into the game as the Nailers funnelled back into defensive areas and they showed good passing attributes as they tried to pick their way through the Belper rear guard.

Kyle Wootton latched on to Dion Kelly-Evan’s pass in the 10th minute and struck a fine effort against the bar, however the action quickly moved to the other end when Belper stunned Meadow Lane with the opening goal in the 12th minute.

Alex Peterson provided a low cross into the feet of Derry Robson who laid the ball off to Danny Gordon, and he struck a delightful first time block buster into the top corner to send the Jimmy Sirrel stand rocking with delirium.

Notts looked visibly shaken which wasn’t surprising, however they began to play their way back into the game and won a succession of corner kicks that the Nailers defended well.

The home supporters erupted on 23 minutes when Kristian Dennis tucked the ball away following a Regan Booty shot, however their delight was short lived as the referee gave an offside decision

Dennis came close on 28 minutes with a tremendous effort from the edge of the area that cannoned off the outside of the upright, then as the Nailers began to feel the pace the Magpies drew level when Enzio Boldewijn cut inside and unleashed an unstoppable drive that bent into the far corner on 29 minutes.

The hosts’ confidence had been restored and were now passing the ball well and the Nailers had to dig deep and close the gaps that threatened to appear.

Kyle Wootton went close with a a good effort that went narrowly wide, then as half time approached, he just failed to squeeze the ball in at the foot of the post as Ryan Musselwhite got to it first.

Wootton’s ill fortune continued after the break when a 50th minute effort trickled wide, but the Nailers found the strength to venture out of their half with Nathan Curtis’s cross just eluding Alex Peterson and another enterprising Belper move culminated with Curtis shooting wide.

The hosts had the ball in the net again on 75minutes after Wootton had glanced in Regan Booty’s header, however the referee came to Belper’s aid by giving a foul on Ryan Musselwhite.

Soon afterwards the Belper stopper excelled with a great double save; firstly from Dennis off a Sean Shields cross and then he blocked a close range follow up shot.

Pressure and possession finally brought a reward for the Magpies in the 75th minute when Regan Booty found a rare gap in the Belper defence and released Kyle Wootton who drilled a low shot past the exposed Musselwhite.

Kristian Dennis threatened to extend County’s lead with a clear shot on goal on 79 minutes but the Belper ‘keeper made a fine save, then the same player flicked a Booty cross just wide moments later

Then incredibly, the Nailers summoned extra energy to put the Magpies defence under pressure in the last minutes of this pulsating cup tie, and on 90 minutes Nathan Curtis had a half chance after the ball bobbled around the hosts 6 yard area, but he failed to connect properly.

The Nailers caused panic in the final moments and it fell to Notts defender Damian McCrory to save his team from the ultimate embarrassment of having to replay the tie, when he threw himself in front of Phil Watt who looked set to volley home an equaliser from barely 2 yards out.

When the referee blew the final whistle the whole stadium erupted in appreciation of the herculean efforts of the Belper players, and the huge number away supporters, 1,718 in all, who helped to make this contest such an amazing spectacle.

The players emerged from this F A Cup run with immense credit and have made the town of Belper extremely proud of their efforts, and their achievements will remain long in the memory.