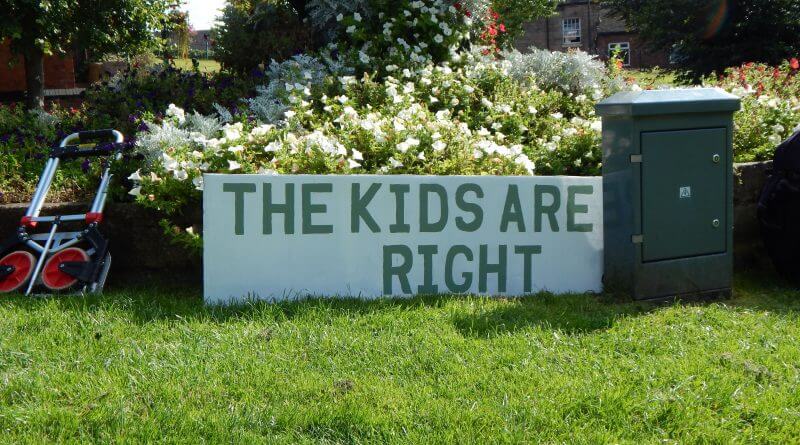 Some Nailed coverage has been delayed due to shortstaffing and illness.

We have had a small but vocally persistent part of the community which has been bullying and criticising Belper children online, hijacking their efforts to raise awareness of the impact of human behaviour on the environment.

Hashtags were used to publicise action.  These hashtags were lept upon.  Public social media posts about the strike were taken over by both climate change deniers and discourse subverters.

Climate change deniers are people who ignore most of science to focus on the single fact that climate changes throughout history, trying to minimise human impact on climate by claiming it is normal, in defiance of science. They are wrong.  Even if they were right (they aren’t), it would make no difference to the consequences for human beings, or how we can slow it and change our behaviour to make the planet work in a way that keeps us all alive in the same form of civilisation that we currently enjoy.

Discourse subverters are people who try to look like they are making a valid point but are actually focused on forcing the topic away from the original point by making people defend themselves against attack.  This is a common tactic used against anything percieved as left wing, liberal, caring, or feminine.  Caring tends to be percieved as a weakness which can be exploited, and silenced by assault.  Sometimes these people do it for the hell of it and we call them trolls.  Some people really don’t understand what is wrong with their behaviour, but what made them so antisocial and caustic is a different subject.

This online bullying is happening more and more with Belper’s social media, and social media in general.  Anyone who asks for help, risks being derided, mocked, bullied and shamed.  And that’s adults.   These targets are children.

Greta Thunberg, the most high profile child trying to get adults to actually do something, is treated with even more alarming cruelty.  And now we have Extinction Rebellion protestors in London (who include Belper residents) being assaulted not only verbally by those who oppose saving the human species, but physically by the authority of a state that speaks empty words and takes contradictory actions.

The political divisions between people have polarised attitudes on most topics, with some absurd stances.

This absurd stance, against people trying to make bigger powers change their behaviour and prompt broad change to save the species from the consequences of its own destructive behaviour, seems to mainly demand two things:

The irony of shouting “hypocrit” here is that these child critics are not involved in any local actions to tackle waste or carbon, haven’t given up anything and have no valid evidence to add to the not-actually-a-debate. They are trying to silence the voices for change by picking on those they percieve to be the weakest.

We adults have poo-ed and wee-ed and littered in the public swimming pool, turned that toilet into something that makes money for rich people (who also avoid taxes on it), idolised the money we don’t see any of, told everyone there’s nothing wrong with that, and then picked on kids for complaining that they can’t swim around our turds, and that we are leaving them to clean it up.  How dare they complain when they aren’t perfect Luddites? Get back to school and tick a,b,or c!

Only it’s not a pool, it’s the whole planet.  And it’s not swimming, it’s breathing.

The scientific consensus on climate change and the climate emergency is almost universal.  The evidence is incontrovertible and staggering.  The consequences are definite.  We are proven to be in the midst of a mass extinction.  Climate change is already affecting crops, weather, coastlines, the ice caps, wildlife, and the livability of hotter countries. Besides the vast amount of scientific evidence and the thousands of scientists screaming to act, there is video evidence, just like there is for the world being round and the moon not being made of cheese.

Predictions are not maybes; any doubt about them is about the severity of the consequences and those predictions are being proved to be too cautious, as change is happening more rapidly than predicted.

As we learn more about what is happening, predictions are updated (this is the very definition of science – to adjust according to extra information). Human activity is proven to be the cause.  There is no valid debate about this.  It is time to stop presenting non-expert people’s contentions as equal to the evidence of experts.  The experts agree – we did this, we need to stop specific behaviours, immediately, as we are late to the fight.

Nailed will not report climate change denial as valid or equal to scientific consensus.  It is not.

The political arguments against fighting climate change are all about greed.  Specifically they are about the impossible demand for ever escalating GDP, to always make more and more profit as a nation, at the expense of human wellbeing.  The amount of change required to combat climate change – in our political systems, in our social structures, in our personal lives, in how we travel, and how we eat, and how much of the planet’s resources we abuse – causes fear.  Humans fear a lot of change because it brings uncertainty.

Bullying children with demands for perfection is not a valid counterpoint to the solid science and urgent dilemma.

On 20th September 2019 about 250 Belper people came out on strike to support the children.  The children were striking under the banner of Greta Thunberg’s School Strike For Climate.  The adults were striking under the banner of Global Climate Strike in support of the children.  Children came from many of the local primary schools and from Belper School (at the time thinking they would be punished for it, but doing it anyway) and Ecclesbourne School.

Most schools were fully behind the children and their headteachers granted them permission to miss school for something so important.  There was an issue with Belper School, with many students being threatened with sanctions before the strike.  They came anyway.  The new headmaster of Belper School, Nick Goforth, came down to the strike and heard the speeches.  We challenged Mr. Goforth about the threats of punishment, and he told us that the students would not be in trouble and that there would be no punishment.  “It’s important that our students are involved.”

Jemma and Imogen have been trying to teach climate change deniers

Lucy is now the elected Leader of the new Youth Council, and is eager to write for Nailed

Other speakers included Mayor Simon Mallett who highlighted that “hundreds of millions of people all over the world” were protesting for action, and said, “It cannot be business as usual.  If we continue to abuse the planet, we will lose it.”

Joel Bryan, from Labour Youth spoke, saying “We have in No.10 a liar!  A liar who will say anythign to get his way.”  Joel urged people to eat less meat, use shampoo bars and use less plastic.

Marnie and Astrid from Pottery School are worried about air, oceans, and forests, and asked people to only use cars for long journeys, and to walk and cycle instead.  They told us how they cried at school about what is happening to the forests.

George, who is homeschooled, told us, “those causing it are not those affected by it.”

Jyoti Wilkinson, Belper Town Councillor spoke about the community orchard which the town is planning, how they intend to install electric charging points for cars, build cycleways, focus on renewable transport and open the rivers for use.

Christian Aid spoke about droughts in foreign countries and other voices which are not being heard, saying, “it is a staggering and scary thing to realise that people around the world are impacted by our decisions.”  He told of how nomadic tribes have had their whole way of life destroyed by the drought causing losses of camels which stop the tribe from being nomadic.

Dave Wells, the Green Party borough councillor for Duffield, thanked Greta Thunberg and David Attenborough and said, “I don’t want your hope; I want you to panic!”  He told us that government needs to follow the lead of local councils and that most sectors have no long term plans for climate change.  He also said, “If we don’t do this, the planet will survive, but we won’t”, and, “We cannot have a government who measures success by profit and GDP.”

St. Peter’s church spoke about the impact on Ezekial, a Massai leader who has visited Belper.  He has lost over 60% of his cattle to climate change.

The climate change deniers weren’t the only ones to divert the focus away from the children.  There is an issue of “ownership” of causes these days.  There were many athiests complaining about Christianity having a voice.  Again this was a mostly focused on a teenager, Joel, who quoted the Bible in his statement that Africa had done very little to cause climate change but would bear the brunt of it.

” I turn to the greatest political activist in human history to be an example for all of us here today. Jesus Christ. He always defended the poor and the needy. In Proverbs 32:8-9 it says “Speak up for the people who cannot speak for themselves. Protect the rights of all who are helpless. Speak for them and be a righteous judge. Protect the rights of the poor and needy” this is what we must do for when the entire continent of Africa contributes very little to this climate catastrophe yet face the worst effects of it. It is a disgrace to the human race. So thank you for all coming here today to make our voices heard along with the millions of others across the globe.”

His long speech made no other reference to Jesus, and neither Christian Aid nor St. Peter’s Church made religious statements.

There were also complaints that the Labour party were speaking, although they are in control of the councils, had authorised and been part of organising the strike, declared a climate emergency, and are responsible for what actions Belper can actually take.  A Green Party councillor also spoke.

Both of these complaints fail to note that the cause needs all kinds of people and that people need to hear people similar to them speaking.  We cannot insist that people cannot bring the whole of themselves to the fight, and use their beliefs, whether spiritual or political, to reach others.

Nobody was selling their religion or their politics.  All were on topic.

My reaction to the climate strike and to the people who hijacked it or damaged it, deliberately or accidentally, was to get my long standing goal of Nailed having a Youth Voice organised.  Up to now we’ve had the occasional article and some creative writing by young people, and one photojournalist.  I don’t think it is enough.  Children are a huge part of our community and they are often given no say, little consideration, and are constantly criticised for being seen and heard.

Several of the children involved in the climate strike are joining Nailed as youth reporters.  Several members of the new Youth Council, which has chosen to make the climate emergency one of its main focuses, will also be writing for Nailed.  Nailed will be turning off comments on their articles, to allow them to have a voice without bullying or trolling tactics.

I did this because this has always been a goal of Nailed, and I have always thought that Belper needed to listen to its children, and that they should have a visible voice.  I did it now because they realised they need one, and I am determined to stand between them and the unsupportive elements of this community.