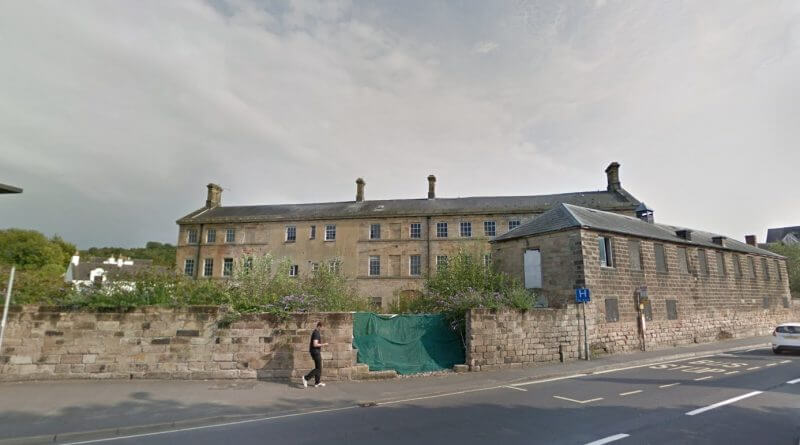 An historic and long derelict former hosiery warehouse in a Derbyshire town could be brought back into use as apartments and shops.

The former Ward, Brettle and Ward warehouse in Belper, was built in the early 1800s and is Grade-II listed.

For more than 200 years, the firm supplied cloth, hosiery, haberdashery and blankets to London’s drapers.

However, the site, in Derby Road, across from Morrisons and near junctions with Leighton Way and New Road, has been left derelict for at least a decade.

Now, Radbourne Construction Ltd, based in Derby, has applied to Amber Valley Borough Council to turn the redundant warehouse and stable block into 26 one and two-bed apartments and three shop units.

The borough council will make a decision on the plans in the next few months.

In a report submitted with its application, Radbourne says: “The two listed buildings in question date from the early and mid-nineteenth century. These naturally lend themselves to the identified use class of housing, namely apartments within an area of Belper identified as suitable for housing by the Local Authority.

“The conversion of the two listed buildings into apartments and three small retail units will be a worthwhile addition, bringing potential employment opportunities and housing to the area.”

The former warehouse building is three storeys tall and sits diagonally, away from Derby Road, while the vacant stable block is two storeys tall and runs directly alongside the town’s main through-route.

In a further letter, Radbourne says that due to the cost of refurbishment and reconstruction of the site’s historic buildings, “there will be no scope for the allowance of affordable housing within this scheme”.

The north-west corner of the site, which sits close to a main roundabout, will be home to a communal garden area for the proposed development.

In total, there would be 32 parking spaces, behind the derelict warehouse.

A private access route for pedestrians would be installed near to the roundabout, in between the new build office block and the former stables.

Meanwhile, the access route for vehicles would stem off Kedleston Close, past the office block and a series of new housing developments.

The developer says that the historic buildings will be “restored out of their current disrepair” with very few changes.
This would include installing roof lights in the western side of the warehouse block and gable windows in the eastern side, while existing windows would be repaired and replaced where necessary.

There are no plans to install a lift, says the developer, but it will ensure that four ground floor apartments will have full mobility access, along with two parking spaces reserved for disabled users near the main entrance.

The developer says that if the site’s car park is full, people can park in the town’s car parks.

It hopes that staff for the shop units will be recruited locally to ensure sustainable travel.

The firm Ward, Brettle and Ward formed in 1803 and during its peak employed 1,000 people.

By the 1830s it was one of the biggest hosiery firms in the country.

From the 1870s, an increasing proportion of Brettles’ output took the form of knitted underwear rather than stockings.

By the 1930s, more than half of the company’s production involved elastic (“Silkestia) stockings.