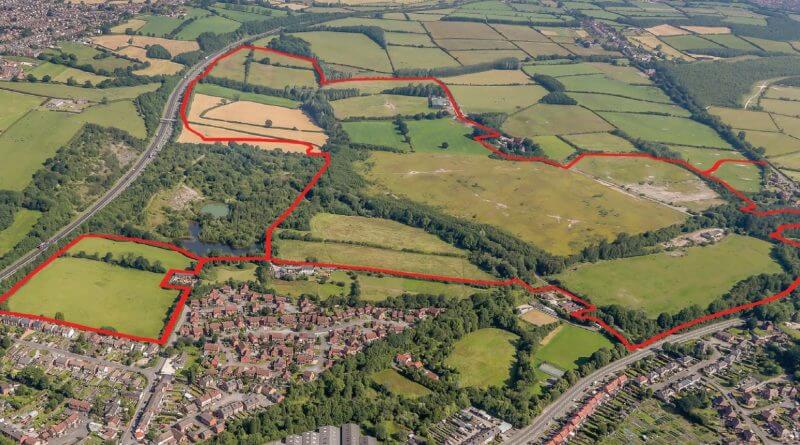 Editor’s Note:  Nailed covers the DE56 postcode, and external areas which are jointly relevant or of interest.  Due to our coverage of local Green Belt campaigns and building plans, we have had a lot of requests for us to cover Cinderhill, as despite postcodes, Denby is a geographic near neighbour.  So I’ve decided to publish on it.  This is topic specific, and the area Nailed covers has not otherwise changed.

Fears over historic acid tar pits have resurfaced as plans for 1,200 homes near a Derbyshire village come forward.

Proposals to redevelop a vast area of land known as Cinderhill around the former tar pits north of Denby and east of Belper, bordering the A38, are once again being mooted.

This is a dramatically smaller development – though still huge at nearly 200 acres – than had initially been put forward, which had featured 3,000 houses and a new junction off the A38 to the west.

A change in administration at Amber Valley Borough Council from Conservative to Labour and the subsequent move to not accept building on any Green Belt land, has pushed the developers to change the plans, they say.

They say that due to the decreased number of homes which can be catered for on the non Green Belt land, the firm cannot afford to build the new A38 junction.

It has also dropped plans to remediate the acid tar pits to the west of the site.

Instead these would be monitored and contained with further fencing and signs to be installed to prevent members of the public from entering.

The houses will range from bungalows through to five-bedroom properties up to three storeys tall – 25 per cent of the homes will be affordable housing.

The main concerns raised by residents related to the influx in traffic which the development would create and the safety of the former acid tar pits.

There would be three access points for cars to get on to the site, one from Park Hall Road to the south east, another off Derby Road past three homes on a small lane called Riverside and a new route through the protected Green Belt off Street Lane.

Tina and Ian Mellin live just to the south of the proposed site.

They feel that existing traffic issues on Derby Road in the morning and evening would worsen as a result of thousands of extra vehicles.

The introduction of more traffic lights at each of the access points of the site, they say, would create further gridlock.

And Mr Mellin said: “We are concerned about the tar pits. The cost of re-mediating them has clearly stopped them from clearing them up.
“They’ve been doing testing and they say it isn’t leaking, but who can you trust?
“We also need more infrastructure – there isn’t the public transport for people to get to and from here, you can’t get to Belper in the evening without a car.
“I am happy that they have moved the employment area from the south, near to where we live.
“We’ve seen plans for this site come forward and again and again, this must be the second, third or fourth plan – so we’ll see what happens.
“The site is used by loads of dog walkers at the moment, it is a thoroughfare.”
Mrs Mellin said: “Our Labrador Kez used to swim in the ponds up there 10 years ago, this was before there was any fencing and people really knew the dangers, and she died of cancer.”
Katie Harris, who lives in Belper, said: “This is the sort of development that will affect the whole of this side of Amber Valley.
“I am interested in what they will do for the roads and schools and other issues  – this will have an impact on all the surrounding towns and villages like Ripley, Belper and Marehay.”

Sharon Bayliss, who also lives close to the site, said: “I don’t think it is going to work, not with no A38 junction.
“If they can’t come up with the money to do it properly then it isn’t worth doing – all the extra traffic on the system will be too much.
“We wanted them to put the A38 junction in place and to remediate the tar pits and neither are happening.”

Lisa Turner lives on what would be one of the main routes into the site, in a set of three houses known as Riverside, off Derby Road. She says that instead of going to great lengths to work around her and the other two properties on the lane, the developers should pay them compensation to move.

Mrs Turner said: “Why spend hundreds of thousands on the issues that they are going to have to go around us living here when actually they can just take us out of the equation.
“We are happy to move on, we are not holding them to ransom. But at a reasonable figure, everyone is happy.”

Mrs Turner says the land around her house regularly floods.  She said: “We are well-versed on the effect of the weather and the impact of water coming into the Bottle Brook upstream.
“They are not going to put me at risk, and that is exactly what they are doing.”

Harworth Group displayed information boards at the consultation event, which updated the public on its work regarding the acid tar pits.

It says that clay and coal were extracted from the site from 1961 and that tar waste and ash was permitted to be dumped there from 1972.

It says that the construction of the A38 in 1976 identified “seepage” from eight of the tar pits to the west of the new route – which led to them being re mediated.

In 2007, the borough council determined that the remaining five tar pits were contaminated land – with risk to health if people came into contact or ingested exposed tar.

Soil has now been placed on the surface across large areas of the tar pits and a fence has been erected around the remaining areas of exposed tar.

The site is now heavily overgrown with grass, trees and shrubs.

Environmental consultants RSK have investigated the site since 2017, including installing 52 boreholes.

They have found that “an unacceptable risk is unlikely to exist” and that there is “minimum migration” of tar due to it being contained by clay.

However, RSK conceded to the Local Democracy Reporting Service that the substances under the site – of which there are 15 metres worth – are harmful and carcinogenic.

If kept buried and undisturbed they should not pose a risk or leach into the surrounding area, RSK said.

They said there would be a risk of digging up the site to remediate and unleashing the buried materials – which are heavily acidic.

Some of the surface level tar water was being tested by a member of the Clean Rivers Trust during the consultation event – the trust has been working on remediation of the surface of the tar pits.

Litmus tests of the surface water on the parts of the tar pits – which have now solidified and are not bubbling or emitting a foul stench – showed that the water was pH1, the height of acidity.

RSK says that unless the tar is picked up and thrown or ingested, it would not be harmful.

Tests have found that there would be minimal harm if a child aged six would spend every day at the tar pits for 10 years.

When RSK dug a borehole in part of the remaining surface tar, the gas unleashed defoliated the surrounding plants, a spokesperson for the Clean Rivers Trust said at the event.

Gareth Smith, a principal engineer for RSK, said: “We need to stop people coming into contact with it, that’s the critical thing.
“If we were to remediate the site it would just be moving it to another site and driving it on trucks through the streets – the amount of carbon emissions involved would be huge.
“The tar is contained in clay bowls, nothing of any consequence can get through.”

A spokesperson for the Clean Rivers Trust said: “Nature has taken what was quite a moonscape into a remarkable landscape.
“This was a particularly nasty tar pit, now nature is reclaiming it.”