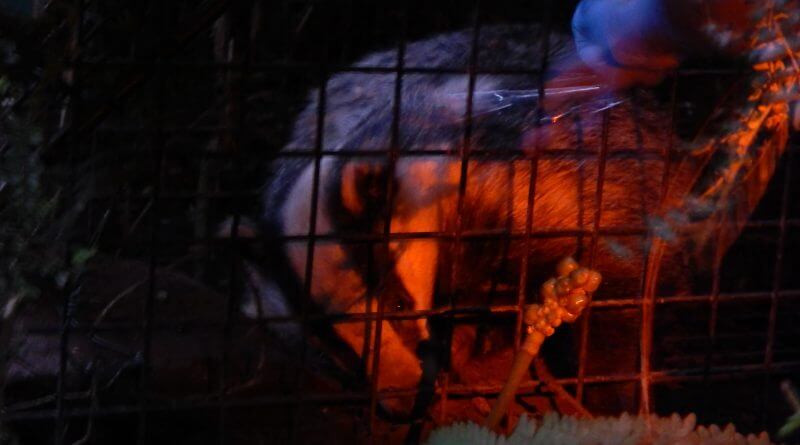 In one of our articles on the badger cull and vaccinations, we stated that we had asked Derbyshire Wildlife Trust why no vaccinations were being done in Amber Valley, and reported the response that they need local farmers to sign up to the program.  2 days later we recieved an invitation to attend the first ever badger vaccination in Amber Valley.

On Tuesday morning at 5am Nailed attended vaccinations of badgers in Ambergate. We came away not knowing if the badgers we saw would end up being tricked out of the vaccination areas (private land where owners signed up to the vaccination program) into cull zones (private land where farmers applied for cull licences) and killed, despite being vaccinated against bovine TB.  It’s a common event, which all of the groups opposed to the cull have been concerned about.

Whether badgers are being trapped to be vaccinated or murdered, it happens the same way, and the badgers, fed on the peanuts which tempt them into the traps over 10 nights, to make them comfortable, are content, and don’t feel the need to leave the traps.  They don’t attack the humans approaching them.  Vaccinating them isn’t usually dangerous or difficult.  It’s upsetting to know that these beautiful animals can be tricked in exactly the same way for good or for ill.

Our Amber Valley badgers have had a stay of execution, but the fight to protect this endangered species is by no means over.

A “Direction to Natural England”, Natural England being the inappropriately named non-departmental body responsible for licencing the badger cull zones, was issued by the Secretary of State Priti Patel on 6th September, and released 7th September.  It says that no licences are to be issued for Derbyshire while the Secretary of State considers the efficacy of culling or vaccinating.  It’s duration is 8 months, and it ends on 1st May 2020.

The Direction to Natural England states:

1.1 By virtue of an agreement under section 78 of the Natural Environment and Rural Communities Act 2006 (“2006 Act”) dated 29th September 2006 and having effect from 1st October 2006, Natural England is authorised by the Secretary of State to carry out certain functions of the Secretary of State, including those relating to the granting of licences under section 10 of the Protection of Badgers Act 1992 (“1992 Act”) and section 16 of the Wildlife and Countryside Act 1981 (“1981 Act”).

1.2 The Secretary of State intends to consider further the relationship between the operation of culling and vaccination for the purpose of preventing or controlling the spread of bovine TB in areas such as Derbyshire located in the Edge Area (that area immediately adjacent to the High Risk Area that is not part of the Low Risk Area).

1.3 Pending the conclusion of her consideration of that matter, the Secretary of State is of the view that no new licences authorising the culling of badgers should be granted in the county of Derbyshire.

It is important to understand that there are no conclusions in this document.  This document does not stop the cull from coming to Derbyshire.  It is not a win, not a victory, not an end to the matter.  It is a delay of 8 months, with no promise of what the eventual decision will be.  Michael Gove was previously presented with a comprehensive assessment of exactly the same topic and chose to ignore it entirely and expand the cull zones, regardless of robust scientific advice to the contrary.

Who achieved this stay of execution?

There have been multiple claims of credit for the “victory” across social media.  It is true that some political parties included the the possibility of ending the cull in their manifestos. None of those parties are in power.

The Green Party, who heralded the decision but did not claim credit, are the one party who have been consistently against the badger cull.  The Labour Party, who did claim credit in various locations, included a manifesto pledge only days ago, as their Animal Welfare Manifesto was released at the end of August.  The Amber Valley Borough Council, under Labour control, voted through a ban on badger culling at an earlier date than the central manifesto, which applied to council owned land, and had no impact on potential culling on private land, as licences are issued by central government to private land owners.

The campaign to stop the badger cull coming to Derbyshire was organised by the Derbyshire Wildlife Trust, with the support of their partners, and some local activist groups, including Derbyshire Against The Cull, who have been monitoring potential cull zones, and identifying areas where farmers have prepared to cull, without a licence to do so.

Politicians in support of vaccination over culling 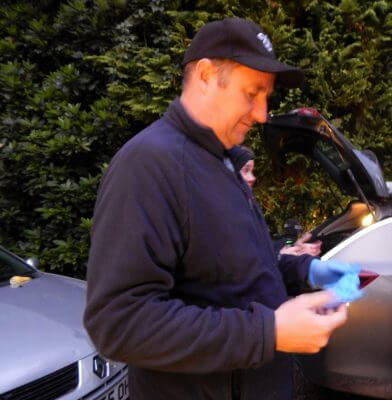 Nigel Mills came to the vaccinations in Amber Valley, and when we asked if he had special interest in the plight of badgers responded, “No, but about 500 of my constituents do.  Almost every farmer says you’ve got to cull.”  However, Mr. Mills also said, “I want to know if it (vaccination) works”, and by the end of his visit, he told us, “It’s better not to kill things, so if there’s a better way (to deal with TB), why not?”

All 3 MPs stated that they would support the campaign to keep the cull out of Derbyshire.  This illustrates the power of  the Derbyshire Wildlife Trust campaign to “Email your MP.”

Other support is given by:

Some of these partners are ethically dubious and contribute to ecological problems through use of plastics, fossil fuels and pollution, but regardless of any dirty halos, these are the partners who can claim partial credit, beneath the towering commitment of the Derbyshire Wildlife Trust and the National Trust, who both run the Derbyshire vaccination program, and created the campaigns which put the pressure on government, and individual MPs, to stop the cull coming to Derbyshire.

Further credit goes to individuals who signed petitions and emailed their MPs, for making the campaign work.

The badgers are safe for this year.  They are not necessarily safe next year.

The vaccination program runs from April, with setside traps so that offpring are not separated from their mothers and dens, until November, just before hibernation.

The light was poor this early in the morning, we could not use flashes, could not be too close to the badgers, and had to be careful not to upset them.  Our photographs are not the best, but this was to ensure that our presence was not to the detriment of the animals.

We observed the ease of performing the vaccinations, despite the untrained and potentially unsettling additional presence of MPs and journalists.  The badgers are neither upset, nor harmed during the process of vaccination.  One badger was so content in his trap that he had to be tipped out.  This is amusing when the motivation for trapping them is honourable and kind.  It’s upsetting when one considers that it is the exact same process that is used to kill them.

Gail Weatherhead from the National Trust was one of the vaccinators we accompanied.  She wanted to emphasise that the issue of culling had taken on an unhelpful for or against oppositional state which hid the real question, which is that of solving the problem of TB.  She told us that, “this is disease management.  To cull or not to cull, and tackling TB, are two separate arguments, and they have become too tangled.”

We asked the representaive of Grith Pioneers, who allowed the vaccinations on their land, what had prompted them to join the program, and they said that they didn’t want the “numbers (of badgers) going down”, and that “vaccination was much better than culling.”

Dr Jo Smith, Chief Executive of Derbyshire Wildlife Trust said of the announcement (that no licences would be issued this year),

We are delighted that together we have successfully fought off a badger cull in the area this year. We thank all our supporters, badger groups, partners and everyone who signed our petition calling on the Government to stop a Derbyshire cull.

We will continue to expand our badger vaccination programme to ensure that Derbyshire’s badgers remain healthy and safe from the cull and we’ll use our findings to better inform the Government’s strategy for managing bovine TB.

We believe that the badger cull doesn’t work and is scientifically unsound. Badger vaccination and other measures, including regulations and restrictions on cattle movements as well as the development of cattle vaccine are the best approach for the farming industry and our wildlife.

The independent review into eradicating Bovine TB, commissioned and ignored by Michael Gove as Environment Secretary, blamed the frequent trading of cattle and poor biosecurity as the main cause of the spread of TB in cattle.

The review is highly critical of farmers and ministers. Poor application of security measures to prevent TB transmission on farms was assessed as “severely hampering disease control measures.” The review also blamed the “2 million” movements of cattle every year as they are traded, and the lack of biosecurity which ought to accompany those trades.  Including the fact that the standard test for TB is ineffective, missing many infections which may be early or dormant,  That failure means that diseased cattle are still transported around the country, whilst infected, spreading the disease.

The most damning part of the review is the fact that TB levels in cattle are not falling, and here the report blamed politicians,  “Current governance arrangements poorly serve bovine TB control.”

Professor Charles Godfray, at Oxford University, led the review and said: “It is wrong to put all the blame on [badgers] and to use this as an excuse not to make hard decisions in the industry, which unfortunately is going to cost them money.”