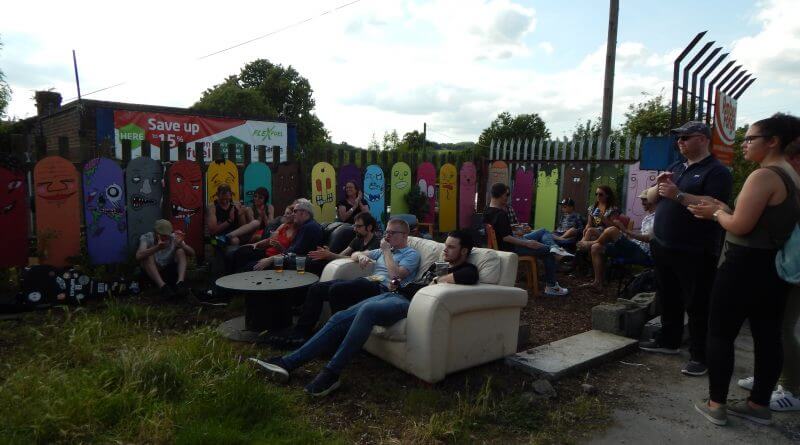 Saturday saw a fundraiser organised by Node56 celebrating the achievement of Juels, Silard, Adie, Danielle and Tom, who took part in the Mind the Three Peaks challenge to ascend the three highest peaks in Britain within 24 hours.   This was all done to raise money for Mind, the mental health charity, in honour of Danielle’s mother and other family and friends who had been affected by mental health issues.

Danielle’s mother took her own life in July 2018 after suffering with mental health problems.

Tom and Adie, who are brothers, have family members that have suffered with mental health problems.

Silard is a friend of Tom’s who wanted to support their efforts.

Juels was the experience of the group, having fallen in love with trekking in the Alps.  Besides Juels, the Belper team had no training before beginning the challenge and some of the team had never undertaken anything like this before.

They completed the challenge in 26 hours, 2 hours longer than the target, due to extreme bad weather.

They travelled up to Scotland the night before, and in the morning they started out from Fort William to tackle Ben Nevis first. The ascent and descent took them 6 hours all told.  They were surprised to find snow at the top, and that it was “super cold”.  At the top of Britain’s highest peak, they were 4413ft “up in the clouds”.  This must have been especially hard on the man they encountered who was doing the ascent with no shoes.

After completing Ben Nevis, they travelled to Scafell Pike, the shortest of the three peaks, arriving for an evening ascent of 3209ft.  They saw the sunset whilst ascending, and did part  of the climb in the dark, lit by their torches and the full moon.

The team travelled to Wales through the night, sharing the driving, and started the ascent of Snowdon at sunrise. Snowdon was plagued with heavy rain and strong winds.  Initially they took a different path to usual, travelling the miner’s route usually used by scramblers. They found themselves in a quarry, and climbed out of it to the regular path.  The high winds made the ascent to 3560ft take 3 hours, and it was too dangerous to descend back down the same route.  The detour the team took for their own safety , coupled with the continuing bad weather, added 3 miles and 2 hours to the descent, the same amount of time they went over their target.

The teams attempting the challenge all choose names.  Danielle’s love of unicorns guided the Belper team, who became Team Unicorn.  Fully committing to this name, they carried 3 hobby-horse unicorns to the top of all three peaks.  The mono-horned steeds accompanying them made them very recognisable to other teams, which our team found funnier every time they were recognised.

Danielle found it really tough but “Scaffel was beautiful.”

Adie said, “I would do it again.  My favourite part was the morale.  Even though it was raining, we were in high spirits.”

They had set a Just Giving and sponsorship target of £500, but they surpassed and doubled that goal by reaching £1000, and on Saturday it stood at £1200 without counting anything raised from the fundraiser.

The Just Giving page started by Tom, currently stands at £600, and is still open to reach its next target of £750.  You can donate HERE.  All money raised goes to Mind.

The fundraiser took place at The Drop Inn youth centre where Tom Stone started Node56, the social enterprise organising events and supplying bands and equipment to festivals, to raise money for the Drop Inn, which has been an important hub for Belper youth, and especially for music.

Many of Belper’s well known bands originated at the Drop Inn, and some came back to play for the fundraiser.

The fundraiser was Node56’s last event for a while.  They will still be around to supply equipment and some of the services they have supplied before, but will going in a different direction and will no longer be arranging events.

The fundraiser was an appropriate Last Hurrah, bringing many bands back together, and combining party, music, hard work and charity – the defining traits of Node56.

The day of celebration included: an auction of bizarre items, a bar, food by Vegan Revelation, Art therapy & Wellbeing, graffiti and doodle wall, fire spinning and Poi, and the 3 Peak Film showcase.

The music offered was Jasper in the Company of Others, Frank Hunter Trio, Manpant, Paytron Saint, Luna Cycle B, THE IDOLINS, Scribble Victory, and SHEARglass, on the Trailer Stage. With Head Jammers, Shrusic, Spindrift, Jiji LaVolpe, Toby Ingram, and The Ferretts, on the Terrace Stage.

Adie was dressed as Theresa May for the day, because “why not?”