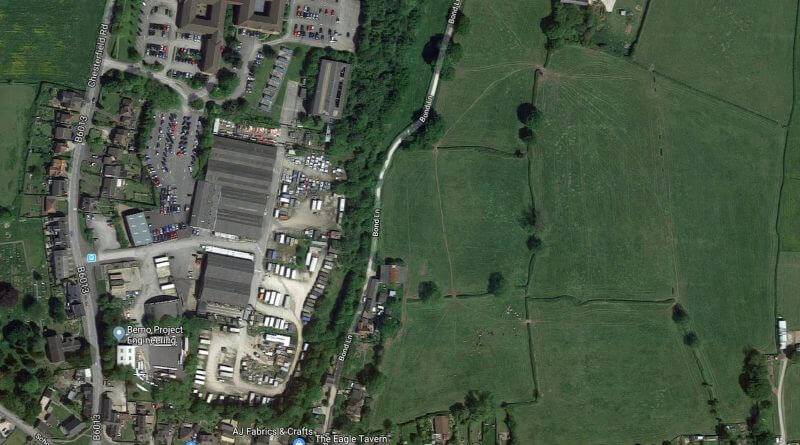 Plans are being fleshed out for scores of homes and business space in Heage – ahead of the land’s potential deletion from the green belt.

Peveril Securities Limited has submitted a request for a screening opinion for a 27-acre area of land off Ripley Road and Bold Lane – east of construction giant Bowmer & Kirkland’s headquarters.

It aims to find out whether its plans for up to 180 houses and nearly seven acres of new business space will require an environmental impact assessment.

Meanwhile, the site is currently one of 14 sites which Amber Valley Borough Council is touting for deletion from the green belt to pave the way for more than 2,000 houses across the borough by 2024. This followed the borough’s first green belt land review for 30 years.

Consultation on these potential deletions, approved by full council in March, has just concluded.

However, ahead of the Heage site being secured as part of the overall Local Plan – a blueprint for future development – plans are already being prepared to build on the land.

The site in question would include part of the current industrial estate off Chesterfield Road. Part of the site is currently Bowmer & Kirkland’s depot. This would be demolished to make way for some of the proposed 180 houses.

The remainder of the houses, along with an extension of the industrial estate, would be built on what is currently green belt land to the east.

Access to the proposed new employment land would extend through Bowmer & Kirkland’s base, north of the houses in Chesterfield Road.
Meanwhile, access to the housing development would stem off Eagle Street and Ripley Road to the south, either side of the Eagle Tavern.

A play area and open space would be built between the houses to be constructed on the current industrial estate and those pitched for the bottom half of the current green belt land.

A car park for St Luke’s Church is also proposed as part of the plans, on land opposite the church, which sits close to the junction with Chesterfield Road and Eagle Street.

The developer’s plans show an intention to retain the current field patterns on the green belt land, along with the existing hedges and trees.
A landscape buffer would be planted between the new housing and employment areas to block them from view.

A statement submitted as part of the recent application, by “professional services” firm WYG, on behalf of Peveril Securities, says: “The proposals seek to redevelop a part brownfield/part greenfield site within and immediately adjacent to the existing settlement framework in Heage.
“Part of the site has previously been subject to intensive development as a depot for Bowmer & Kirkland.
“This part of the site will be redeveloped for housing.
“Development for a mix of residential and employment uses will take place on agricultural land to the west and south west of the Bowmer & Kirkland head office.
“No aspects of the environment are likely to be significantly affected by development.
“The assessment of landscape impact carried out as part of the Local Plan process identified the land immediately adjacent to Bond Lane (which runs north to south through the site) as having low sensitivity.
“The part of the site further to the east was identified as having high sensitivity.
“The proposed development will include mitigation methods to establish strong defensible boundaries to the north and east of the site, where the impact of development would be likely to be highest.
“Notwithstanding, officers have already concluded via the green belt stage two assessment of the site that this land should be proposed as an additional housing growth site/economic growth site in the Local Plan.”

Last week, the borough’s Conservative MP, Nigel Mills, published a letter slamming the authority’s plans to delete land from the green belt to make for houses.

He says that insufficient consultation was carried out on the proposals, with not enough time given to consider the plans.

Mr Mills has urged a government planning inspector to reject them.

In March, the borough council approved plans from Garner Holdings to build 175 houses on the Firs Works industrial site less than a mile away.

This development would almost double the size of Nether Heage.