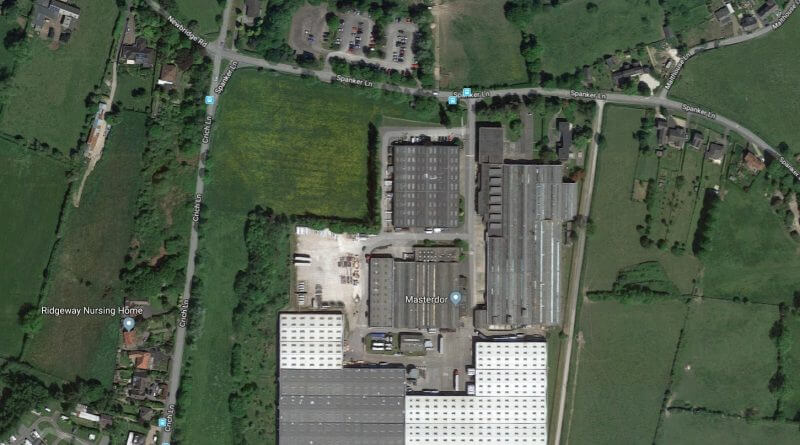 Plans for 175 houses on the site of a former prisoner of war camp, now an industrial estate, have been approved – despite major concerns over road safety.

The proposals, for the Firs Works site, would see Nether Heage, north of Belper, almost double in size. Pitched by Garner Holdings, the former Camp No. 58 in the Second World War, will become home to 27 flats and 148 houses. More than 50 of the houses will be affordable housing.

At a meeting of Amber Valley Borough Council on Monday 11th March 2019, councillors chose to approve the application by a vote of six votes to five – with chairman Cllr Norman Bull casting the deciding vote.

Residents attending the meeting, some of whom were amongst the 45 residents who had submitted objection letters, said the application was “flawed throughout” by suggesting that traffic would not increase or have a significant impact on the village.

They also felt that without a footway along the site, there was no way for residents on the proposed estate to travel safely to the village.

This was echoed by Derbyshire County Council’s cabinet support member for highways, Cllr Trevor Ainsworth. He had sent a statement to be read out at the meeting, commenting: “I think if one person wants to walk their children to the school there should be a safer way to do it than exists now. I cannot compute that a developer can publish a traffic plan that is dangerous and near on impossible for residents to do (walk their kids to school) safely whilst the highway remains as it is and we can do nothing about collecting monies for its improvements under planning legislation.  If monies were forthcoming we could make the journey safer, for vehicles and for pedestrians.”

One objecting resident said that there have been plenty of road accidents around the site and that “the roads cannot cope with more houses”.  They said that there is frequent road rage – at least twice a day – around school pickup and drop-off, which is already causing issues for residents.

Another objector, Rita Childs, said: “I don’t want to be killed or injured as a result of this development. I have to remind you of your responsibility to improve road safety for residents.”

Cllr Paul Lobley, of Ripley Town Council, said: “I was at last week’s meeting for the green belt land decision, it would not be right for me to say that this site should not be approved when it is on brownfield land.  This village, however, is not sufficiently robust to cope with this development. This will overshadow Nether Heage and impact on its character.”

Richard Pigott, agent for the developer, said: “The applicant is a local employer who wants to expand his business, but on a different site.  Existing business on the site will be invited to move with the applicant to another site.  The increase in traffic would be minimal.  While this is a major application, it is contained within the built setting.  This represents sustainable use of a brownfield site.”

The developer will be paying £33,446 for improvements to the Thomas Williams Playing Fields.  Along with this, it will also be paying out more than a million pounds for education improvements at local schools.  Of this, £485,629 will be paid out for 30 spaces at Heage Primary School and £898,718 for 26 secondary school spots and 10 post-16 spaces at Swanwick Hall School.

Borough councillor John Walker said regarding this “where will the extra pupils be taught at Swanwick? Are they going to be taught on the playing fields? Because I hear it is oversubscribed”.

Cllr Jane Orton said: “What many members of the public say is that they want us to build on brownfield sites, we have an opportunity here to do so.  It is a shame that (county council) highways can’t make sure a footpath is put in.”

Cllr Faye Atkinson said: “Just because this is a brownfield site does not mean it is appropriate to build on it.”

Vice chairman of the committee, Cllr Ron Ashton, said: “There is quite a lot that has been said about building on green belt sites, and this is a good chance to develop a brownfield site.  It is hypocritical of Labour to vote against brownfield development after last week’s meeting (in which there was a debate on building on protected green belt land).”

As the decision to approve the application was made, residents cried out “you should be disgusted”, and “if someone is killed on Newbridge Road (near the site) you will be responsible”.