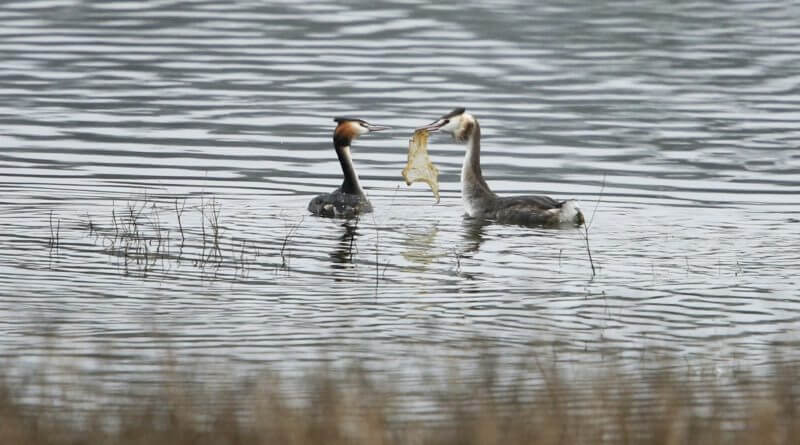 Above is a photo snapped by Mary Wilde at Ogston Reservoir in Derbyshire.  It shows two great crested grebes in courtship.  The male is presenting the female with what would, naturally, be food, but here the offering is plastic.

We hear much about the impact of plastic on the oceans, and sealife, but the problem is here in Derbyshire too, affecting our wildlife. Birds and animals in Derbyshire are frequently caught in plastic, or eat it, which clogs their insides and can kill them. It pollutes habitats and has found its way into nesting materials and protected environments, as well as rivers and ponds.  Anywhere humans walk is littered with wantonly discarded wrappers, which damage the wildlife and the environment.

Kaite Helps at Derbyshire Wildlife Trust said, “Plastic pollution has been big news recently thanks to programmes such as BBC’s Blue Planet – but the problem is so close to home, not just in far-away oceans and this photo is a stark reminder of that. In Derbyshire, plastic is clogging up our rivers and places that should be havens for wildlife. We have all contributed and we all need to make changes in order to prevent plastic waste.”

“Plastic in the environment poses such a huge threat to wildlife because it doesn’t just disappear; it simply breaks down into smaller and smaller pieces. Aside from the dangers of becoming trapped or injured, animals often ingest plastic fragments, with the potential to build up in the bodies of animals right up the food chain,”

Sue’s Sustainables, in The Gatehouse at De Bradelei Court is Belper’s resource for plastic free goods.