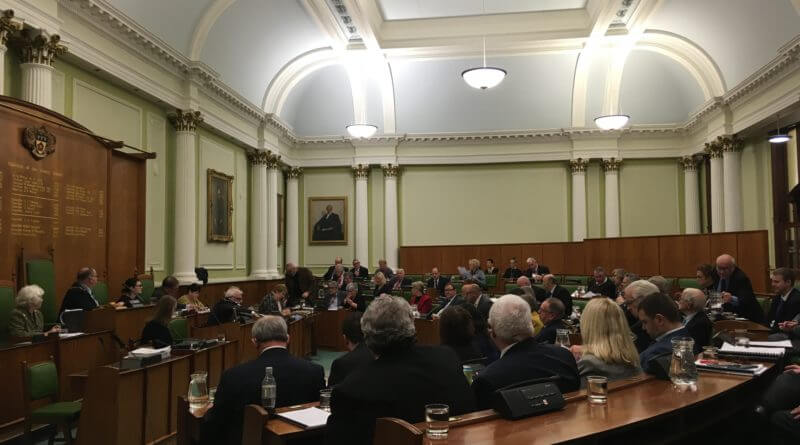 A bitter war of words between councillors has seen Labour accused of taking Derbyshire “back to the 70s” – while the Tories, it is claimed, want to revert to “Victorian times”.

The political jibes were made during a lengthy, heated and loud debate over public sector cuts on Wednesday, December 5.
Councillors made remarks about the “dire” state of public sector funding and exchanged “history lessons” about which party to was to blame for austerity and the rise of foodbank usage.

As part of this debate, the Tory leader of the authority, Cllr Barry Lewis, made a jab at Derbyshire’s Labour Police and Crime Commissioner, Hardyal Dhindsa. Cllr Lewis, Conservative, said: “I certainly won’t take history lessons from a party whose own PCC increased, unnecessarily I might add, spending on his own bloated office, while cutting frontline services and complaining about it.”

Leader of the opposition, Labour’s Cllr Anne Western, began the debate on public sector funding. She says that public services in Derbyshire are at “breaking point” as a result of funding cutbacks, and backed an opposition motion urging Prime Minister Theresa May and Chancellor Philip Hammond to end public sector cuts. Cllr Western also called for a stop to the roll-out of universal credit – a new benefit payment system. She said: “Theresa May has declared that austerity is over. Philip Hammond announced in his budget speech that austerity is coming to an end. However, in the real world, austerity is still with us and causing great hardship. Public services in Derbyshire, and the rest of the country, are still facing further budget cuts over the next few years. In Derbyshire, as in the rest of the country, almost nine years of funding cuts have driven public services to breaking point. Universal credit roll-out is pushing many people to the point of despair.”

Cllr Western referred to a “damning” report from the United Nation’s special rapporteur, Philip Aston, who said “British compassion for those who are suffering has been replaced by a punitive, mean-spirited, and often callous approach”. She said that this had been ignored. Cllr Western said that new terms such as “in-work poverty” were being created due to austerity.

Fellow Labour councillor Dave Allen said: “Food banks didn’t exist until a few years ago but they are now an established part of society. Austerity is still rampant and food banks are the proof. There are many people living in situations that are not acceptable.”

In response, Cllr Lewis said: “Food banks existed under (Tony) Blair and (Gordon) Brown. “The Labour Party is the party of rank hypocrisy – during their tenure here in County Hall they shone the light of Corbynism and Momentum ideology by focusing their cuts on making the worst headlines possible. That’s why you’re over there and we’re over here,” he said, gesturing to the other side of the council chamber. The ruling party sits in the central seating area. He continued: “We recognise that we could do more with more and we will campaign effectively on our terms, which are more effective than yours, which are aimed at cheap headlines. What we will not do is dance to your frankly absurd tune of 70s socialist worker rantings. Your approach is to sing public praises and throw money at services. I had thought that we were beginning to make some progress between our respective groups on issues where we could take matters forward here in full council by compromising and agreeing.”

Deputy leader, Cllr Simon Spencer, in response to members of the public shouting across the chamber, said: “Shout as loud as you like, I’m willing to have a full debate with anyone who wants one. He said the opposition could not “continuously shout” about financial difficulty.
“You cannot spend your way out of a recession,” he said. He continued: “I do wonder whether Labour want us to move forward, or back to the 70s.”

Cllr Western stated: “You would take us back to Victorian times.”

Cllr Paul Smith, Labour, retorted that “we are the kind, warm and cuddly party, and you are the nasty party”. He said: “When I first joined the council in 1996 I welcomed Labour coming into power in 1997 because investment came to Derbyshire. And the investment wasn’t just in schools, we saw the Derbyshire Royal Infirmary replaced by a state-of-the art city hospital. This is a two-way thing because we are attacking vulnerable communities, and they are paying the price, as well as the schools they attend, and the one thing to lift people out of poverty is education, education, education. What is wrong with you (the Conservatives), come on, protect vulnerable people.”

Labour’s Mick Wall said: “Cllr Spencer said you can’t spend your way out of a recession – but you can’t cut your way to growth either.”

Liberal Democrat councillor Beth Atkins said: “There are some dodgy councillors on both sides of the arena here, and we are all supposed to be here to think about our constituents. We need to get something done about this dreadful universal credit, and people need to know what they are entitled to. If you’re not a literate person and you make a mistake filling out a form you can be put back a fortnight.” She said that if parents cannot afford to feed their children, they may have to steal food.

Fellow Lib Dem, Cllr Sue Burfoot, said: “I am horrified at the amount of shouting on both sides here. But our Conservative friends do not seem to be able to accept that there is an increase in childhood poverty, parents struggling to feed children and going to foodbanks. They seem to expect the poor and vulnerable to pay the price. We can sit in our ivory tower and say don’t borrow but austerity is a political decision.”

Cllr Alex Dale, Conservative, said: “Austerity means living within your means. No one would encourage a family to spend and borrow beyond their means.”

Cllr Western concluded: “To play this game is to miss the point altogether, why has our five-year plan had to be revised three times? If our financial position at DCC is as a result of Labour, then why has Tory Northamptonshire gone bust, and East Sussex?”