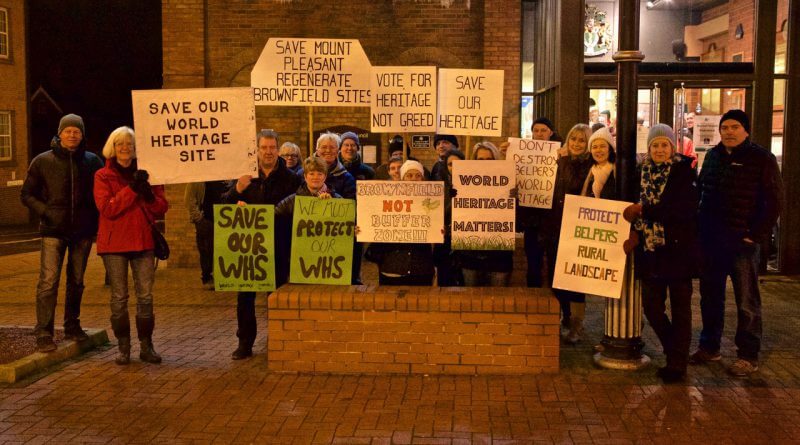 I feel privileged to write on two subjects very close to my heart. Firstly my home Town of Belper and secondly the continued development within the Town which I and a great deal of other people believe could place our World Heritage Status in danger, and ultimately see it being lost

As a member of both Belper Town Council and Amber Valley Borough Council, I must stress that this article is purely my opinion and not that of the Local Authorities.

Where do I begin? With the planning board meeting held Monday 18 December. One of the items to be discussed was the proposed development on land situated off Belper Lane, a piece of land which lies within the World Heritage Site Buffer Zone, a Buffer Zone created to help protect and maintain our World Heritage Status. Belper was granted this status not just because of the Mill and the impact this building had on the world, and the whole Industrial Revolution, but a major part was that the settlement of the Town had grown whilst retaining its rural landscape. A unique, untouched rural landscape which once lost can never be replaced.

I listened to the officers report and listened to the speakers who went before me, the latter all giving very valid material grounds and reasons why this application should be refused, not wanting to go over the same ground twice I thought I would use a different approach, a more human ethical and moral reasoning. As a Councillor I believe we have a moral duty to listen to what the local people have to say, after all, in most cases they know the area far better than a Councillor from a neighbouring Parish or indeed the officer who’s job it is to deal with an application. I put this to members of the Board, my opinion is that Belper’s World Heritage Status isn’t something to be afraid of, isn’t a mill stone around the Borough’s neck when it comes to development, but something that we should be proud of, something that we should be shouting from the rooftops, something that if nothing else brings valuable income to the local economy.

The speakers that went before me and the 200 plus people that had submitted their objections are not nimbys, simply there to try and prevent development near their homes, these are people who are passionate about protecting this unique landscape,  passionate about protecting our Town’s heritage, passionate about ensuring that future generations have what we have today. I have said at a previous meeting that if this land was the habitat of a Giant Panda, a Tiger etc that a developer wanted to concrete over then people all around the world would be in uproar over it, and the eyes of the World would be watching, well the eyes of the world are watching, World Heritage means exactly what it says, World, places within that World that are so unique that they are, and need, protection.

Unfortunately despite all the passion, the material planning grounds, our argument fell on deaf ears and the application was approved. Approved by Councillors from neighbouring Parishes. Approved by the absence of 2 Councillors who had left the meeting early for reasons I can only assume was that they were unhappy with an earlier decision. Both seemed quite well and were very vocal on issues surrounding their areas. Approved despite the total loss of a heritage asset etc etc etc I could go on, but most worrying is that this approval for 65 houses gives the developer a foothold on World Heritage Buffer Zone land, call me cynical if you want but I personally do not think that it will be long before we see subsequent applications on the remaining fields until the developer has achieved their ultimate goal of developing the whole area, this is despite several areas of land within the town having had planning permissions granted lying dormant.

Belper isn’t afraid of development, you only have to look at how the town has grown over the last 20 years or so, but in my opinion Belper has already done more than its share in the growth of the Amber Valley, and now more so than ever before we need to say enough is enough. Yes a developer’s money can buy a new classroom and a doctor’s consulting room but what it can’t buy is history, it can’t buy and it can’t replace Our Heritage.

7 thoughts on “Opinion: “Now More So Than Ever Before We Need To Say Enough Is Enough””