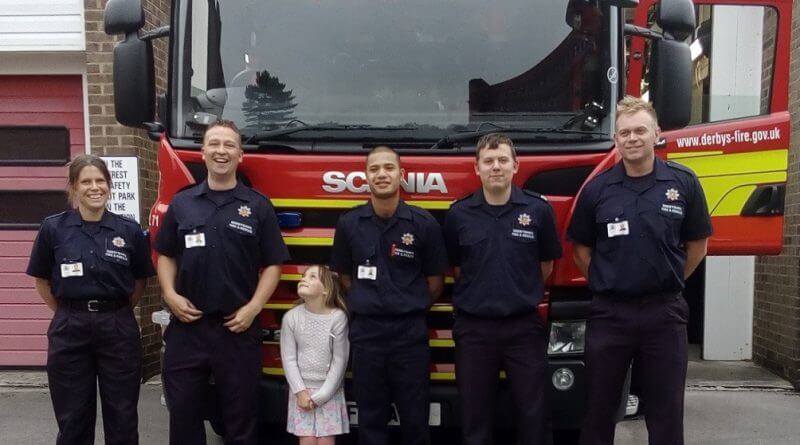 Inspired by the hard work and perseverance shown by Firefighters during the Grenfell Tower disaster, six year old Casey McKernan of Belper took it upon herself to help raise funds for the Firefighters Charity.

Casey, who has raised £50 for the charity, has been selling cakes in an attempt to help support Firefighters who may be injured, ill or in need of psychological support to come to terms with the life and death situations they face on a daily basis.

As a sign of gratitude, Casey was invited to a drill session at Belper Fire Station on 21 August, where she was able to see in person the type of scenarios Firefighters regularly train to deal with.

Casey’s mum Marie said: “It’s great that Casey was able to come and see Firefighters in the flesh operating in a real-time drill.  It puts into perspective the training that goes on to ensure Firefighters are ready to act should the worst happen.  The bravery Firefighters show to help people in need is remarkable and Casey was so touched by what had happened during the Grenfell Tower disaster that she decided she needed to help somehow.

“Hopefully the money that Casey has raised will go towards helping the men and women who help keep us safe on a daily basis.”

“Allowing Casey to come see some of the drills Firefighters regularly take part in is the least we can do to reward all of her hard work in raising money for the Firefighters Charity.”

The Firefighters Charity provides support to all current and former fire and rescue service personnel across the UK, whether they need help physically or emotionally.  DFRS hosts Firefighters Charity Car Washes at stations across the county.  To find out where the upcoming car washes are being held, visit: http://www.derbys-fire.gov.uk/events/

For more information on the Firefighters Charity visit: https://www.firefighterscharity.org.uk/