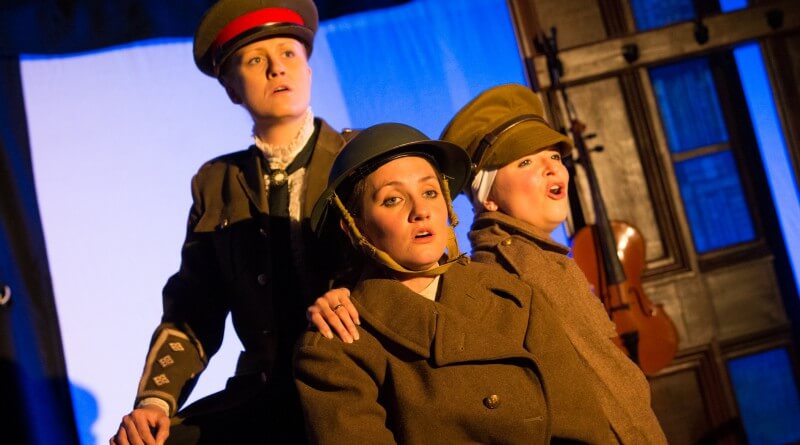 Live & Local, in collaboration with Badapple Theatre, will be performing a new play ‘The Thankful Village’ this week (11th of May) in Belper.

The Thankful Village is a songful drama set against the backdrop of World War 1; a story of hope, humour and humanity, of men who went away and women left behind, and their re-uniting, for better or for worse, in the winter of 1918.

The Thankful Villages were those which lost no men in the First World War, because all those who left to serve came home again. There were just 52 parishes in England and Wales which could claim this honour at the end of the conflict.

This story is about the men who went away, the women left behind, and the eccentric twists and turns of daily life that led to their re-uniting, for better or for worse, in the winter of 1918. The quaint village backwater of Bottledale is changed forever by the advent of the Great War in Europe, but the roll of honour in the village square remains empty as the years pass.

Chance escapes and odd coincidences reunite families in this heart-warming tale told with gentle humour and songs, in a way only Badapple Theatre know, 100 years after the war began.

Badapple Theatre has presented many successful Rural Touring shows in recent years: Back to the Land Girls and its sequel, Lights Out Land Girls, winning the hearts of many. This new show The Thankful Village, is a story of hope, humour and humanity.

Kate Bramley, a founding member of Badapple Theatre, has written this play, and directed along side Paul Smith. As usual this captivating show is accompanied by original songs and music from Jez Lowe, another regular on the rural touring network with his band Jez Lowe and the Bad Pennies.

Tickets are available from Oxfam Bookshop in Belper.