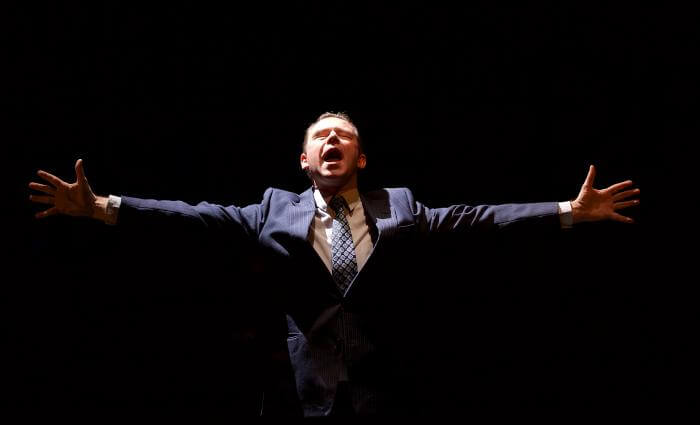 “Brian Clough’s journey from his beloved Derby County to the team he hated the most.”
“Down the stairs, along the corridor, round the corner, into the dressing room. His dressing room.
1974. Brian Clough, the enfant terrible of British football, tries to redeem his career and reputation by winning the European Cup with his new team. Leeds United. The team he has openly despised for years, the team he hates and which hates him. Don Revie’s Leeds.
Adapted from David Peace’s brilliant and ingenious novel, The Damned United takes you inside the tortured mind of a genius slamming up against his limits, and brings to life the beauty and brutality of football, the working man’s ballet. ”
Recommended age 14+
Written by Anders Lustgarten, adapted from David Peace’s novel
Director – Rod Dixon
Set & Costume Design – Signe Beckmann
Production & Rehearsal Photography by Malcolm I Johnson

The Damned United is a “fictional” account of Brian Clough’s 44 days managing Leeds United in succession to his arch nemesis Don Revie. Simultaneously it also looks at his rise and fall at Derby County after falling foul of Chairman Sam Longsen.

Having seen the film, read the book and listened to the author talking about the book, I was intrigued as to how this play would work. With its earthy language it would be fair to say it is more like the hard-hitting book than the more warm-hearted film.  That’s not to put the play down in any way. It was done in a different but very clever way. It used dummies as the tracksuited Leeds United players and a dancing, running and walking mannequin-faced support cast as the non-speaking moving players.

The play covers the trials and tribulations of Clough’s career from his career ending injury to his start at Hartlepools followed by his time at Derby, onto his short sojourn at Brighton, culminating in his even shorter stay at Leeds.

It featured a couple of interesting extra elements, namely the haranguing given by Bury Captain Bob Stokoe when he suffered his bad injury on Boxing Day 1962 plus the death of his mother in 1973 and the effect that it had on his subsequent decision making.

In the absence of a huge cast, the dialogue was carried by the five main players. Andrew Lancel gave a solid performance as Brian Clough without resorting to the “hey young man” nasally-voiced caricature used by many Cloughie imitators.

John Graham Davies and Tony Turner doubled up as the chairmen and directors of both Derby County and Leeds United – all played with subtle differences, with a portrayal of Leeds coach Syd Owen added to the mix.

Apart from brief appearances as Bob Stokoe and Johnny Giles the only player portayed was the maverick Duncan McKenzie played ably by Tom Lorcan.

The last segment of the play was the famous Calendar TV confrontation between Clough and his arch-nemesis Don Revie with Lancel exchanging dialogue with actual footage from the programme. It was done so well you genuinely couldn’t see the join – as a famous comedian often said.

All in all it was well worth going to see and a play I would highly recommend but don’t take your maiden aunt to watch it with you.