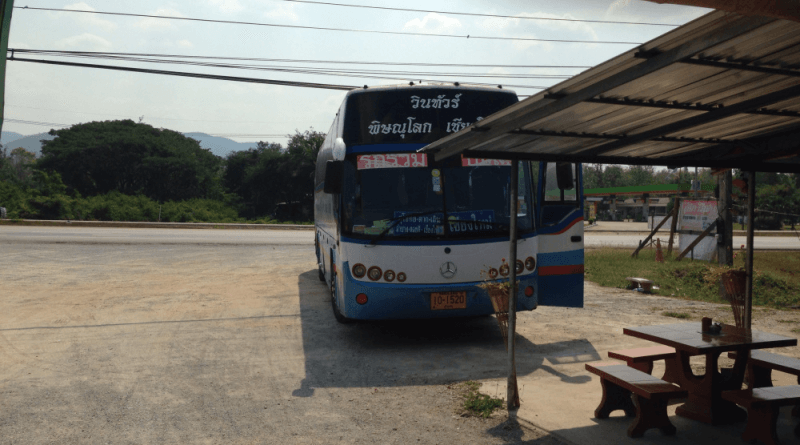 Did you every have a thirst to drop everything and go travelling? Fly to the other side of the world just too see what’s out there? Quench that wanderlust and experience all the sights, tastes and culture that a country has to offer? Every week we will be catching up with Belper couple Tom Walsh and his fiancé Hollie as they backpack and blog their way around Thailand. It’s going to be quite a ride and we’ll be there for all the ups and downs they may face as they go from Bangkok to Belper and back.

Song of the day: The Snake by Al Wilson

Alright? good, glad to hear it.

We had a late one last night so I didn’t get round to writing. After going to a couple of impressive temples in the day, we went for lunch at a sushi cafe. The only sushi I’ve ever tried was in the Tesco meal deal, and I did not like it. Surprisingly, tasting the real deal was a lot nicer, and I think it won’t be the last time we visit this place. Wasabi is surely the hottest substance known to man though – any more than a microdot is guaranteed to have you steaming at the ears. Hollie managed to outclass me in her dexterous use of chopsticks to pick up her food – my technique was about as effective as using a sieve to carry water about, and I was picking bits of rice off my trousers for the rest of the day.

In the evening we walked to the Thaphae Gate on the east wall of Chiang Mai’s old city. We bought tickets for the cheap seats for that evening’s Muay Thai boxing, then went to a bar next door to await the stadium’s opening. By lucky coincidence it was Happy Hour so we had a couple of cocktails and played pool whilst Pink Floyd sung Wish You Were Here to us over the tinny sound system. We went into the Muay Thai stadium just after opening and found that we’d done right not to pay the extra 200 baht each for ringside seats – we were right next to the VIP seats in what was a relatively small arena, and people sat in the front row must have had neck ache by the end of the bouts as the ring was raised about six feet off the floor. 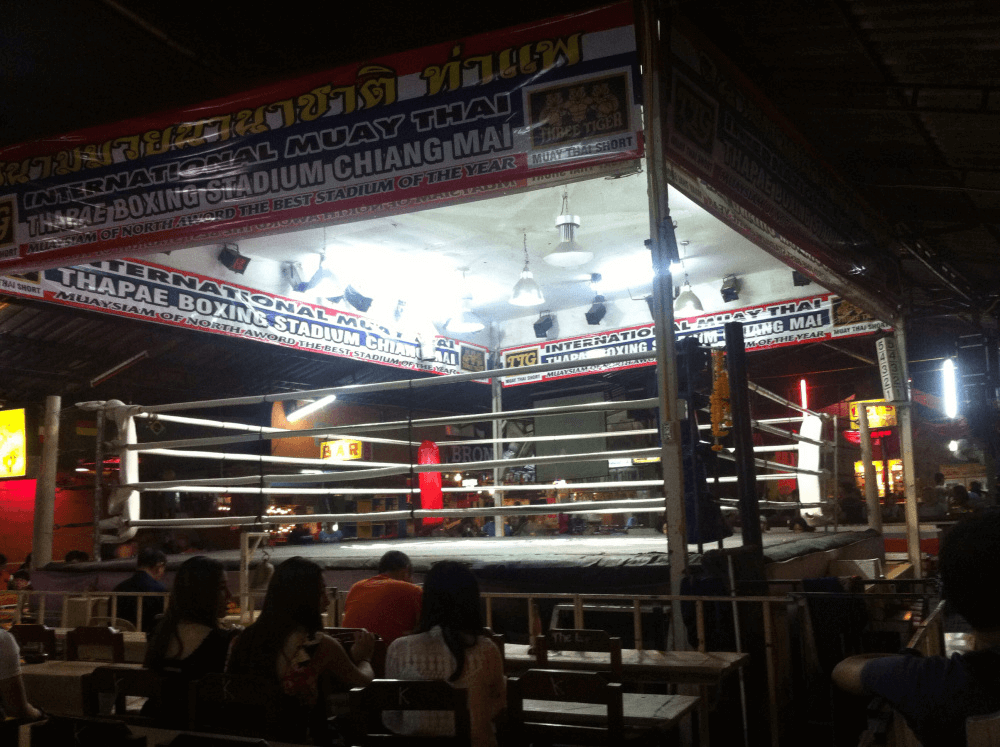 The stadium is a large, sweaty, corrugated shack with concrete floors. The aroma of Thai cooking and stale beer hangs heavy in the air – the place has a real grassroots feel to it and it put me in mind of nights spent at the greyhound races back in Blighty. We got in just before nine and the first contest didn’t start until half past, but for this entire period a strange oriental song was being played. It consisted of a very high-pitched flute (We think it’s called a pi chawa) being played over the constant beating of a drum. The instruments followed each other and occasionally the drum would speed up, followed by the flute, or vice versa. It was an oriental sounding, urgent kind of music that conjured images of men in ancient times marching to war. At first we thought that the song was being played over speakers, before we realised that there were two blokes sat on a raised platform playing this other-wordly music.

The first match was between two kids of around seven. Their shorts looked too big for them and you could almost feel the mainly farang audience resisting the urge to say “Ahhhhhh”. Any lingering cuteness quickly disappeared when the first bell rang and they leapt at each other. Muay Thai must require an unbelievable amount of stamina and fitness – probably even more so than boxing. The fighters deftly hop from one foot to the other, constantly raising their knees slightly to feint a kick, or dipping their head as if to come forward, before pulling back. The sparring itself is a hypnotising contest of concentration where each fighter looks for a way in behind the guard of their opponent. And when they do, it can be brutal. One of the little tykes sold his opponent a one-two combination with the gloves before his leg came round in a powerful roundhouse kick that connected with the other lad’s cheek. The wounded fighter bounced straight back up from the canvas and piled into his opponent, who was enjoying the adulation of the crowd for his previous heroics and had lost concentration. It went on like this for five rounds. Between each round loud pop music plays and a large trough is slid into each fighter’s corner, to catch the water which their coaches chuck all over them. Each fighter’s team rub their muscles vigorously to prevent them from cramping up.

The fighting itself was fast-paced and skilled. But before we went to the stadium I’d read a review on tripadvisor that suggested that most of the fights were fixed. This wasn’t immediately apparent and I’d say that the first three or four fights were genuine contests. The highlight of the night was the fourth fight between two lads who looked like they were in there late teens. They really went for it with all they had. When a winner was decided at the end of five rounds they bowed deeply to each other and to the crowd. The last three fights had some tasty moments but then ended very quickly, with one of the fighters going down softly and not getting back up again. Our suspicions were further enhanced when a bloke kept coming round waving a load of 100 baht notes in our face. Each fight he would come round and say “I red. You blue?” or “I blue, you red?” The idea being that we pick the fighter in the opposite coloured trunks to what he had picked. Funnily enough, he always seemed to back the winning fighter. Overall, we had a great night and would like to see some more Muay Thai. The fact that the last couple of fights – between grown men – were so cringingly fixed was a shame. On reflection I’m disappointed we were so jetlagged in Bangkok that we missed the chance to watch the country’s premier fighters in action, but we may have time to go on our way back through Bangkok. 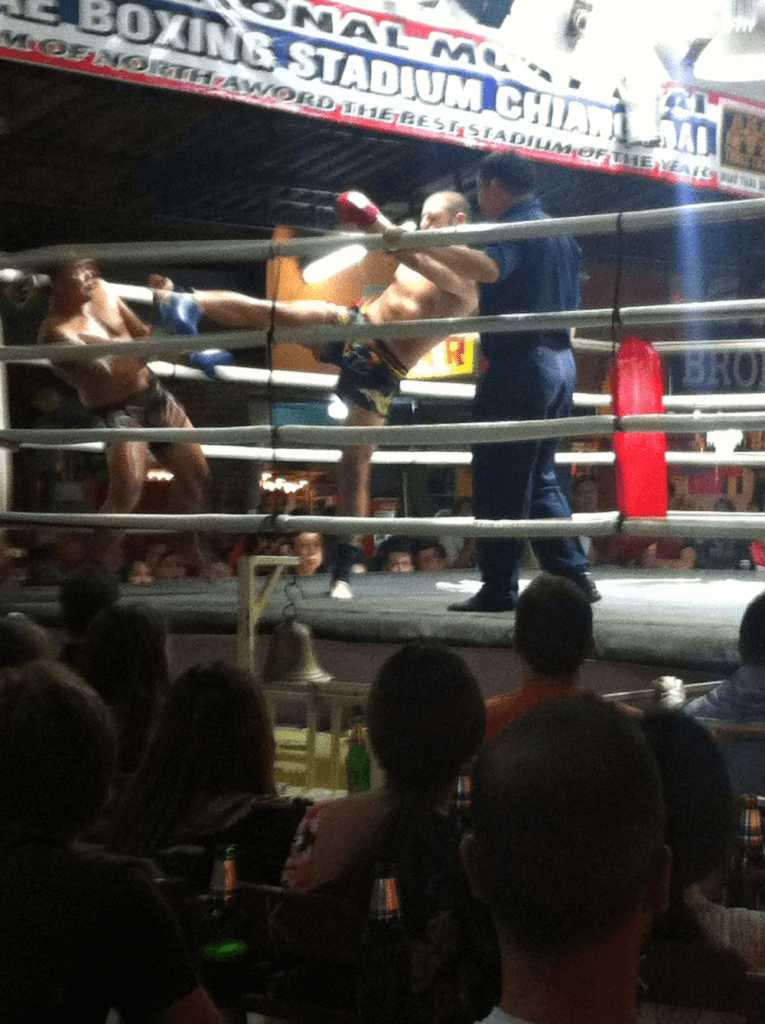 We returned to the reggae bar that we’d been to on our previous stay in Chiang Mai. The ice sculpture was there again and Hollie got in on the action, having a shot of tequila poured down the channel by a jolly Thai gentleman who looked like a Hell’s Angel. We met a young English couple from Bournemouth. They were pretty far out and the girl told us about how she’d been deported from Thailand as soon as she arrived because she’d ripped some pages out her passport to write a phone number down. We nodded along sympathetically as she told us how she’d got off a 13 hour flight and had to get straight back on the next one home, just for tampering with her passport. Lovely people, but complete morons.

At 12am all of the bars in Thailand have to close up. We filed out onto the street and wondered what to do next. The friendly Thai Hell’s Angel told us about a club called Spicy that stayed open late just outside the city walls, so we decided to have a wander over. After about ten minutes’ walk I asked Hollie where the club was and she replied “Over there, where all those disco lights are flashing”. As we neared the disco lights it became apparent that they were not in fact disco lights at all, but the flashing lights of about half a dozen police cars. It seems that the club doesn’t have a licence after 12am after all. We stood watching the commotion from across the street, with our backs to the moat that surrounds the old town. A couple of Chinese lads had their phones out, filming something in the murky depths of the moat. As we looked down, a MASSIVE SNAKE was meandering it’s way along the surface of the water. When I say MASSIVE, I mean 8-10 feet long as a conservative estimate. We followed it along the moat, pointing it out to anybody who was passing by. In the end it’s body disappeared below the water and it settled near the bank, with its head poking out of the water and tongue flicking intermittently to taste the midnight air. We stood with a crowd of people gawping at it for about twenty minutes until we were satisfied that it wasn’t going to move anywhere. This was one of those unforgettable experiences that costs nothing but will abide long in the memory. For all of the paid trips and prearranged tours we will go on over the next few months, the spontaneous things that just seem to happen along the road are sometimes the most rewarding.

To round the night off we went to the supermarket to soak up the booze with 7/11 toasties (Hollie had Danish carbonara flavour. It sounds horrendous but it really works.) We returned to the hostel and Hollie ID’d the snake as a Burmese python, a constrictor. It wasn’t venomous and probably not big enough to take down a fully-grown human, but let’s just say I wouldn’t fancy getting in the water with it!

Today I’ve been a shadow of a man owing to last night’s antics, whilst Hollie remains as spritely as ever. The first half of the day was spent drinking fruit smoothies and eating strange Thai variations of the traditional club sandwich. In the evening I felt better and we’ve been to Chiang Mai night bazaar – a huge market stretching over two buildings and several floors. Thousands of traders sell anything from crocodile leather, to ivory-handled blades, to carved wooden images of Buddha. A seafood restaurant brings new meaning to the term “fresh” by keeping all of its stock alive in fish tanks at the front. You pick the specimen that you’d like to eat and they’ll kill it and cook it right in front of you. There are lobsters and shrimps, crabs and catfish to name but a few.

For regular update on the journey you can follow their blog here:

One thought on “Guest Blog: From Bangkok to Belper – Week 4”