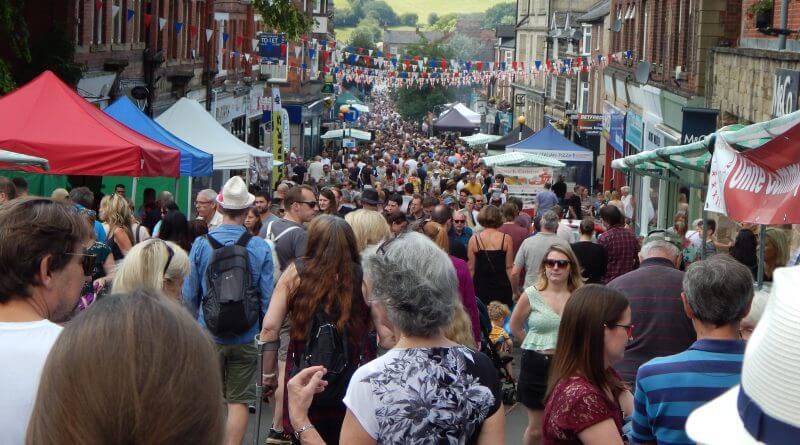 Those who were drinking seemed to enjoy the festival more than those who were eating, or wishing they could eat the expensive food on offer, or the more affordable food of noticably absent regulars.

The bottleneck where foot traffic jams occur each year, due to locating stalls which gather queues in the centre of King Street, was eased. Unfortunately the easing was perhaps unintentional, as there were fewer stalls in every area of the town.

The exception to this was the Market Place. As usual the Black Swan was heaving as they brought the beer and Pimms outdoors, right next to the truck stage, which provided the only music of the event. Opposite the Black Swan,  No. 28, under the control of Vegan Revelation cafe, played host to Simon Pr@xis Jones’ Thrive festival, which, apart from a dubious diet cure for cancer, was composed of many warm, forward thinking local businesses.  Alongside The Angels micropub, this made for an oasis of interest, entertainment, and affordable food which was suitable for all diets.

This contrasted harshly with the dominant position of the oft reviled ostrich burgers in the centre of the barer-than-usual Memorial Gardens, making it unavoidable for those who feel upset by the positioning.  Ostrich populations are in decline within the current mass extinction, and the high level of non-meat eaters in Belper makes the positioning insensitive.

The most obvious difference between this year’s festival and previous ones, was the lack of music.  In previous years Node56 have organised busk stops throughout the town, and bands in the Memorial Gardens.  All of this was very noticeably absent, changing the mood of the event.  Node56 have been an almost invisible influence on the town, but now that they have stopped organising music for Belper events, that invisible influence is keenly missed.  Besides the truck stage at The Black Swan, and kids tv tunes on a grating PA, music was otherwise absent from the festival this year.

A highlight of the festival was The Railway, which reopened just before the festival to reveal a complete outdoor and indoor renovation, transforming the pub into a space which is destined to be popular.  Already prepared to be part of Belper community, they had a garden bar and plenty of comfortable seating.  This is the largest outdoor pub area in Belper now – a welcome addition to summer socialising.

Nourish @ No.44 offered quality handmade ice cream and street food stalls, but the access to their garden was blocked, from the street, for the event.

Most complaints have been about how little there was on offer, and the price of the food which was available.

A complaint post on the Belper group on Facebook gathered 185 comments (at time of publication), with almost all of the respondants agreeing and expressing that there was too little there this year, and that the food was way too expensive.

There were suggestions that there could be rules on how much food can be marked up.  The olive and Turkish Delight stall was singled out repeatedly as the highest overpricing, and from previous experience they also deploy tactics to pressure people into buying more than they intended.  Disabled parking was also an issue, despite the intention of accessibility with the return of Slow Shopping at the beginning of the festival.

These complaints are being collected to take to the council, although it must be noted that most of the festival was organised by the previous council.

With the greatest of good will, and pride in the town, people want it to be better than it was this year.

Despite the problems, there were still thousands of visitors to the town, socialising, relaxing in the Memorial Gardens, and enjoying their day.  However, this wasn’t what Belper has come to expect, and as a good food festival is wanted, the criticism should be taken as focuses for improving a much loved event in Belper’s calendar.