By now most Derbyshire residents will have or will be about to receive the news of how much extra they are to pay in council tax this year.

However, depending on where you live in the county, this will vary greatly.

This is generally due to the difference in the services which are provided to residents in each council authority area.
For large parts of Derbyshire, the council tax bill is split between the county council, borough or district council and fire and police services – each authority’s section is called a precept.

The county council takes the largest slice of the pie – roughly 75 per cent – followed by the borough and district authority on around 10 per cent, police on 10 per cent and fire service on five per cent.
Some areas also have either a parish or town council.

In Derby, there is no county or borough authority, with the city council taking a larger slice of the pie.
The price you pay for council tax depends on the value of your house – although this is based on how much it was worth in 1991.

Houses are then placed in separate bands from A through to H based on this value. Typically, most residents are in Band D.  As such, Band D is the group used to set the average rate of council tax by each authority. All the figures in this article will relate to Band D homeowners.

The borough and district council precepts fluctuate drastically across the county, this is where the difference between how much you pay compared to someone who possible lives just down the road really comes into play.

Most have increased their precepts by roughly the same amount – around £80 – but charge more or less depending on the services they provide, such as bin collections and leisure centres.

Derbyshire Dales District Council has the largest precept of any of the district and borough councils in the county – meaning its residents will also pay the most in council tax.  It’s precept rose another 2.45 per cent this year (£5) to £209.27. This is almost £20 more than its nearest rival – High Peak Borough Council – which increased its precept by a further 2.9 per cent (£5.40) to £191.76.

The residents with the lowest amount of council tax are in South Derbyshire, where the district council opted for a 2.45 per cent increase (£3.10) to £162.31.

Overall, if you live in the Derbyshire Dales you’ll be paying £100 more in council tax than residents in South Derbyshire and £170 more than Derby taxpayers.

Here is a full breakdown of the average total council tax bill in your area, followed by the local authority precept and the overall average increase (minus parish and town councils): 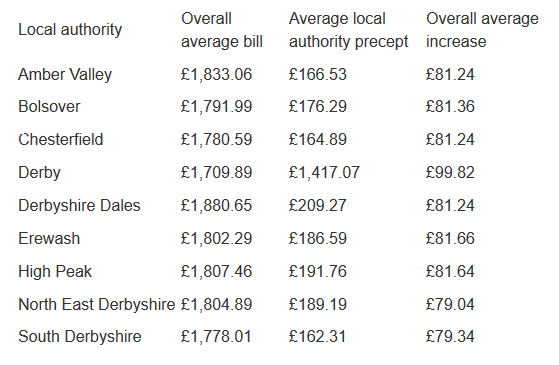 2 thoughts on “Differences in Council Tax by Area”