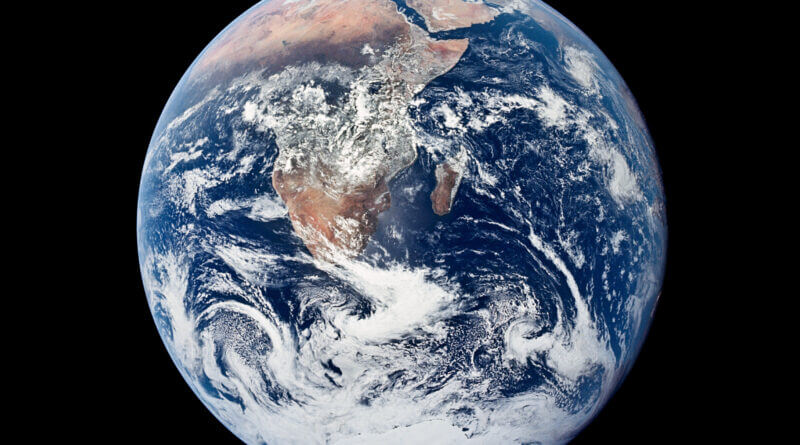 In December’s Night Sky: Venus, Jupiter, Saturn and Mars are all on view.  The Winter solstice is on the 21st.

Mission to the Moon

The iconic picture of the Earth known as the “Blue Marble” (see headline image, courtesy of NASA) was taken on the 7th of December 1972 by the crew of Apollo 17 as they approached the Moon.  Apollo 17 proved to be the culmination of NASA’s lunar landing mission.  It has taken 50 years for the space agency to return back to its objective of landing people on Moon, now through the Artemis space programme.

NASA successfully deployed its Space Launch System on the 16th of November.  The SLS carried the uncrewed Orion spacecraft.  The objective of this part of the mission, Artemis 1, was to orbit the Moon and to safely return the Orion spacecraft back to Earth. Re-entry was accomplished on the 11th of December.  The next stage of the Artemis programme will a crewed orbit of the Moon – scheduled to take place no earlier than 2024.

Occultation of Uranus: 5th of December 2022

Unfortunately this was clouded out.  Rather frustratingly the Moon could be glimpsed through the clouds – but little else.

The Winter Solstice, the shortest day of the year, takes place on the 21st of December.

The Geminids Meteor Shower will peak on the night of Tuesday the 13th of December going into the early morning hours of Wednesday 14th of November.  At their peak the Geminids produce more meteors per hour than even the Persieds.  The Geminids tend to produce bright and relatively slow moving meteors, so it is well worth going out to see if you can spot a few.  Start looking from 11.00pm onwards for best results.

The predicted rate of meteor activity is predicted to be around 100-120 meteors per hour.  You won’t see that many, but on the peak night expect to see a meteor every twenty minutes or so.

it is also worth looking for Geminids on any clear night up to the 13/14th and for a couple of nights beyond that.

The  last meteor shower of the year is the Ursids.  This is a small meteor shower that sometimes performs well.  It is visible from the 17th up to the 22nd of December.  At its peak (December 22nd / 23rd) it may produce up to 25 meteors per hour.  Expect to see a couple of meteors per night if the viewing is good.

The  New Year brings the Quadrantids Meteor shower.  The rate of meteors per hour is not as  high as December’s Geminids, but viewing is often repaid by seeing a few meteors per session.   The Quadrantids tend to produce bright meteors, some with long trails.  The best time to look for them will be on the 2nd of January going into the early hours of the 3rd.  If you see a shooting star on New Year’s Eve, it is highly likely to be a Quadrantid.

25th December: A crescent Moon appears to be close to Venus

26th December: The Moon appears to be near Saturn

There was an occultation of Mars in the early hours of the 8th of December.  The Moon started to obscure Mars at around 4.50am and Mars reappeared at around 5.50am.  This was a rare event and, because of the early morning start, not one I intended to observe. However,  I stirred at the right time and thought why not?!   I saw the start of the occultation, but not its end – as I decided to return back to bed.  Observation notes in next month’s newsletter.

Mars is currently visible in the evening sky, starting to rise just after 8.30pm in the east.  It is worth looking at the planet through binoculars – which will reveal the redness of its disc.  At the moment, depending on the size of the telescope, it is also possible to see some surface markings (see Space is the Place – November 2020, for observation notes).

Jupiter:  Jupiter shines brightly in the south, from nightfall onwards.  Jupiter is well placed for observation.  A telescope will show Jupiter’s bands and the Galilean moons.

Saturn:  Jupiter is joined in the sky by Saturn.  Saturn is lower down and well to the right of Jupiter – but is clearly visible.  Most astronomy telescopes will show Saturn’s rings, but you will need to catch it early as it starts to set around 8.30pm.

Venus:  Now the “evening star” in the south-west.  Catch it just after sunset.  It is low in the sky, but bright and unmistakeable.

The crescent Moon appears to be close to Venus on the 25th of December.

The International Space Station is one of the brightest objects in the night sky.  It is not hard to spot and flies-past periodically throughout the year.  Fly-pasts tend to swing from PM to AM.  Typically it will be in the sky for up to four minutes at a time. The space station moves slowly across the sky, at first bright and then fading as it moves over the horizon.  NASA’s Spot the Station site tracks ISS and gives accurate forecasts of sightings (all in the AM at the moment – but it is always worth checking).  Signing up to the Alerts Site will give you advance warnings for the more prominent sightings.

(Please note that due to unforseen technical difficulties, related to posting on the site, the column is late this month)