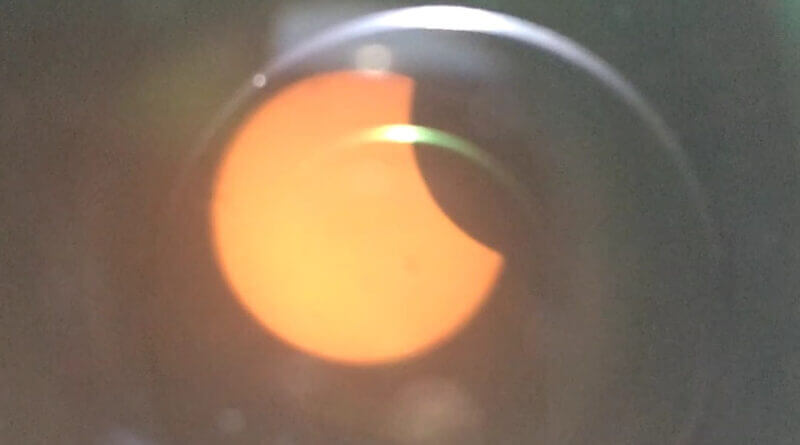 The partial solar eclipse of 10 /6/ 2021 was mostly clouded out, and the Sun never got bright enough for solar projection.  Because of this I decided that I would be better off looking at this year’s eclipse through an approved solar filter.  Although I could have built my own, I decided to buy a ready made one – some folding was needed.  I overestimated the size of the filter, but luckily it proved a good fit around my telescope’s dew-shield.  I also used a rubber band to secure the filter – a belt and braces approach to prevent the filter from accidentally falling off.  The filter I was using presented an orange solar disc – some show the disc as white.

For the observation I used my Bresser 70mm long refractor, not the best telescope in the world – but it was easy to set up, portable, and good enough for solar observation, as noted when viewing the transit of Mercury. (See Belper Nailed: A Good Day For Solar Observation).

Early cloud cover totally obscured the Sun, so I missed the beginning of the eclipse.  Breaks in the cloud allowed me to set up the telescope to locate the solar disc in the eyepiece and then it was a case of getting glimpses.  Luckily the cloud cover dispersed, and I got very good views of the maximum of the eclipse around 11.00am and all the way to last contact at around noon.  I found that a 32mm eyepiece gave a good view of the disc at 22x magnification.  A 25mm eyepiece (28x) was also useful – at higher magnifications I was constantly adjusting the telescope to track the Sun.

The headline image above was taken at around the maximum of the eclipse.  I used a mobile phone to take a video through the telescope’s eyepiece.  I then extracted a good image from the video (the artefacts around the image are lens flare from the eyepiece).

Two sunspots were prominent, and I could also see crenellation along the edges of the Moon’s silhouette.  As the eclipse receded it gradually occulted one of the sunspots, showing the movement of the eclipse over the Sun’s surface.

The eclipse also allowed for some informal street astronomy, and it was good to show curious passers-by the view.

Artemis: Mission to the Moon

NASA will have another go at launching the Space Launch System and Orion spacecraft in November.  There will be a roll out of the launch assembly on the 4th of November, leading to an attempted launch on the 14th of November.  This part of the mission (Artemis 1) will be uncrewed and will involve an orbit around the Moon.  The purpose is to demonstrate the capabilities of the launch system and the Orion spacecraft, particularly in terms of safe re-entry back to Earth.  Successful completion of this stage will lead to a crewed mission (Artemis 2) around the Moon, possibly in 2023.

In Mid-November, Virgin Orbit will be launching a payload of small satellites into space from Newquay in Cornwall.  Surprisingly, these will be the first ever satellites launched into space from a site in the UK.  The UK tried to develop a launch capability in the 1960s / 70s with the Black Arrow rocket – which launched the Prospero space satellite from Woomera, Australia in 1971.  However, it was cheaper to piggyback on US launch capability and, as such, the Black Arrow rocket programme was cancelled in 1971.

This space launch will involve a modified Jumbo Jet which will take off from an airport in Newquay, Cornwall.  At the first stage of the launch the Jumbo jet will carry a rocket, secured under its wing, up to 35000 feet above the Atlantic ocean.  At the second stage, the rocket will be released / launched to carry its cargo of small satellites into space and Earth orbit.

If successful, it is hoped that this will be the beginning of regular launches from Cornwall and other potential sites in the UK.

The Taurids only produce a couple of meteors per hour, but the shower has a long peak.  They are slow moving and tend to be bright.  If you spot a meteor in the first half of November it could well be a Taurid.  The best time to look for them is the 12 / 13th of November, around midnight.

The Leonids Meteor Shower will peak on the night of Thursday the 17th of November going into the early morning hours of Friday 18th of November.  Seeing is going to be good, as the Moon won’t start its rise until midnight.  The predicted rate of meteor activity is low, at around 10-15 meteors per hour (so much patience will be needed).  Leonids are fast and bright meteors – start looking from 11.00pm onwards.

4th of November: Jupiter appears to be above the Moon

11th November: Moon appears to be close to Mars

29th November: The Moon appears to be near Saturn

Jupiter:  Jupiter shines brightly in the south, from nightfall onwards.  Jupiter is well placed for observation.  A telescope will show Jupiter’s bands and the Galilean moons.  The great red spot (a storm that circulates around Jupiter) is harder to see.  (See observation notes from Space is the Place, October 2022).

Saturn:  Jupiter is joined in the sky by Saturn.  Saturn is lower down and well to the right of Jupiter – but is clearly visible.  Most astronomy telescopes will show Saturn’s rings.

Mars:  The red planet is currently visible in the evening sky, starting to rise just after 8.30pm in the east.  Mars is currently in the vicinity of the constellation Taurus.  It is worth looking at the planet through binoculars – which will reveal the redness of its disc.  A telescope, depending on the size of the telescope, could reveal surface markings (see Space is the Place – November 2020, for observation notes).

Uranus:  An occultation of Uranus is due on the 5th of December (more details next month).  You will need a telescope or a good pair of binoculars (10x50s at least) to see it.

The International Space Station is one of the brightest objects in the night sky.  It is not hard to spot and flies-past periodically throughout the year.  Fly-pasts tend to swing from PM to AM.  Typically it will be in the sky for up to four minutes at a time. It moves slowly across the sky, at first bright and then fading as it moves over the horizon.  NASA’s Spot the Station site tracks ISS and gives accurate forecasts of sightings (all in the AM at the moment – but it is always worth checking).  Signing up to the Alerts Site will give you advance warnings for the more prominent sightings.