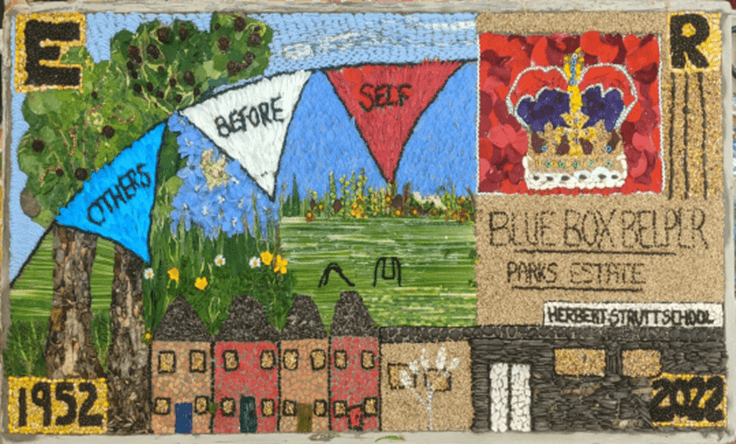 When summertime brings its flowers and greenery to rural Derbyshire, the tradition of Well-Dressing is certain to return.

From roadsides to water sources and wells, decorations made with the natural resources spring has to offer appear in their traditional colour and liveliness across many area’s in rural Derbyshire.

For Belper, the colourful custom returned to the town for its third annual year. For the 600 years that the tradition has existed, Well-Dressings have commonly been designed and decorated by members of the community, with the designs intricacies and colour often being the result of teamwork and community endeavours.

In keeping the traditions spirit of community alive, Blue Box Belper worked together with members of the Parks Estate and wider communities to participate in this years Well-Dressing. Choosing the theme of ‘Jubilee’, Belper’s Well-Dressing aimed to combine the towns rural nature with its community and wider history in England.

Well dressing can be found across Derbyshire and Staffordshire with a central focus on the Peak District. Whilst the name suggests it only applies to wells, in reality it has been used for different water sources including springs and even the village pump. The process of constructing a Well-Dressing has traditionally consisted of ‘puddling’ clay in which the clay is mixed in with water, sand or grit and then placing the puddled clay into a wooden frame to be smoothed and decorated with designs made from petals, seeds and other natural resources. The popularity of well dressing has always been up and down, but in these modern times it has had an uplift throughout the county.

The origins of the tradition have been lost with time with different theories being given for it. One such theory is that it is Celtic or Roman. People in those times gave offerings to water sources as a means of thanking the spirits. If indeed it does go back that far, it was a time when history wasn’t written down. Another theory is connected to plague. With the Black Death in 1348 and a similar plague in 1665, which came to Eyam from London by infected cloth, people were scared. It is thought that villagers decorated wells as a means to give thanks for their survival.

One thing that is certain is that the tradition thrived during the Victorian era. During this time, many places that had not used well dressing before, including Belper who started the tradition in 1838, embraced it. Whilst the types of decoration differs depending on where you go, the only rule that applies to all is that they use natural materials. Some places only use a religious or non-religious themes, whereas others use a mixture of both. This stems from the fact that the tradition, until recently, would have been linked to the Church as the local vicar would bless the well for the next year. During the Second World War well dressing lapsed but since then has had a wonderful revival.

This year, Belper’s Well-Dressing personalised its design to illustrate the visual and personal aspects familiar to those who reside there as well as being recognisable to those who visit. The town’s notable greenspaces, sprawling fields and woodlands were recreated using pinecones, leaves and flowers from the local fields they sought to recreate. Houses and buildings, including Belper’s Herbert Strutt Primary school, were re-imagined on the Well-Dressing as being built by stones, eggshells and seeds. Combined with Belper’s personal representation, the theme of Jubilee was noticeable in the Well-Dressing’s inclusion of national symbols such as a crown postage stamp and red, white and blue bunting. In each bunting flag, positioned above the buildings and green landscapes, the words ‘others before self’ were inscribed, reflecting the traditions emphasis of teamwork, community and thanksgiving, values that have transcended through Well-Dressing’s history to the daily focus of Blue Box Belper and its wider communities.

Upon completion, the Well-Dressing was available to be viewed in the Belper Memorial Gardens until the 26th of June.

After celebrating the colourful tradition, Belper now awaits the next summer and its flowers for the return of Well-Dressing.

Blue Box Belper is a volunteer led Community Group & Registered Charity based on the Parks Estate in Belper, Derbyshire. We run and support several community activities and are working hard on plans to build a new Community Centre which will replace the original Blue Box building that was demolished in 2015.

Article written by Abi Francis and Danielle Burton, Interns from the University of Derby working with Blue Box Belper over the summer, 2022.