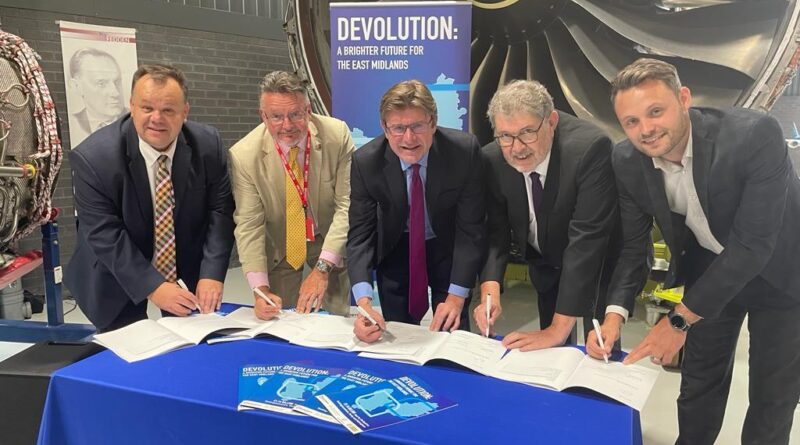 A £1.14bn devolution deal has been agreed to try to kick start economic development in the East Midlands and create an elected regional mayor.

It means leaders will be given more power by the Government to make localised decisions.

It gives councillors more decision-making ability to spend money on major projects, including investment in public transport and regional developments.

The deal – the first of its kind in the region – was signed by the Government and leaders of Nottingham, Nottinghamshire, Derby and Derbyshire councils at the Derby Rolls-Royce hub on Tuesday afternoon (August 30).

It follows more than a year of negotiations between councils and ministers over the scale of the powers on offer.

Councils had three options, including staying in the current format of local government and receiving little-to-no extra powers from Whitehall.

But the option selected by leaders will lead to a new East Midlands mayoral combined council being created, sitting above the city and county councils with representatives from all four authorities.

This is the maximum devolution deal on offer and will mean the new authority governs 2.2 million people.

But it does not involve widespread local government reorganisation – both cities and counties will continue to operate on the same council structures.

The combined authority will then be run by the directly-elected mayor – similar in structure to the post held by Labour’s Andy Burnham in Manchester – and a new election for this post is scheduled for May 2024.

It is hoped the deal will bring the region in line with other areas where devolution is already in place including Greater Manchester, South Yorkshire and the West Midlands.

And leaders believe it will reverse years of funding packages that saw the East Midlands consistently receive the lowest per-head investment in areas like transport, healthcare and education.

Councillor Ben Bradley (Con), Mansfield’s MP and leader of Nottinghamshire County Council, has been pushing for the deal since he took over the authority in May last year.

He told the Local Democracy Reporting Service: “It’s hugely important, not least because it brings almost £1.2bn extra to our neck of the woods and because it’s probably more like £5-6bn by the time we’ve invested it.

“For the man on the street, it means we can deliver better bus routes, better public transport, bring in new investment into jobs, and we will have the ability locally to set up the skills and the qualifications to support those jobs.

“That, in itself, is massive, along with the extra money for all the important services people need.”

“It’s choosing to give us more powers in our area and its choosing to follow that up with resources over the next 30 years.

“It won’t solve all of Nottingham’s problems, it won’t catch up with the under-funding of our council over the last 12 years, but it’s the way the Government is choosing to try to make things fairer.

And Mr Clark, the secretary of state, believes the deal will allow the region to reach its full potential.

He confirmed it is worth £38m per year for 30 years and will lead to better settlements for leaders.

“It’s a big deal,” he said, “the East Midlands has been one of the areas that hasn’t benefited from the devolved powers places like the West Midlands and Greater Manchester have.

“What that means is decisions that were taken in London can now be taken here, with more than £1bn in the hands of local people rather than people in Whitehall.

“The East Midlands contributes so much. If you look at the companies here, the small businesses here, I think we should double down on that and give it more powers, more resources to do great things.”

However, some leaders of district and borough councils in Nottinghamshire have raised concerns over some elements of devolution.

Cllr Jason Zadrozny (Ash Ind), leader of Ashfield District Council, told the Local Democracy Reporting Service: “There’s no doubt that the East Midlands has seen massive underinvestment from successive Labour and Tory Governments and that this needs to change.

“The reality, however, is that residents living in a cost of living crisis will be scratching their heads asking if a new mayor will solve their problems.”

The devolution plans will now go out to public consultation in the winter and will require final parliamentary sign-off before becoming official.

The combined authority is then expected to be set up throughout 2023 before the mayoral election takes place in May 2024.