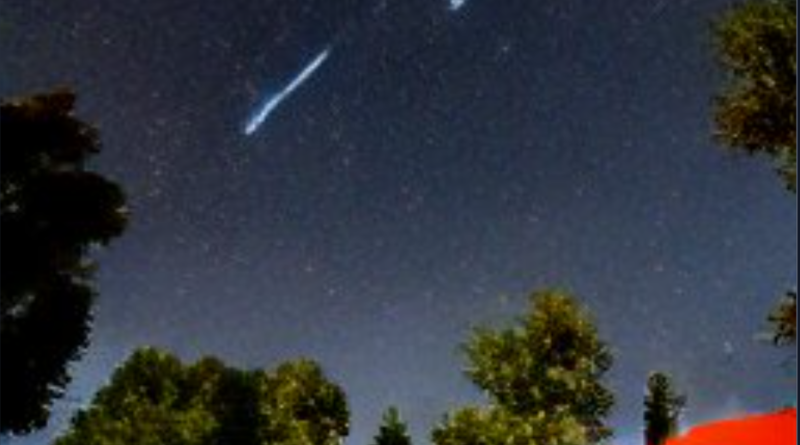 In August’s Night Sky Over Belper:  Jupiter and Saturn return to the evening sky.  A supermoon on the 12th clashes with the peak of the Perseids meteor shower on the 12 / 13th  (view the Perseids earlier, if you can).

The Comet Swift-Tuttle orbits around the Earth every 133 years.  It was last seen in 1992.  In its wake, particles and fragments of cosmic dust.  Every year the Earth passes through this cloud of debris.  Fragments hit the Earth’s atmosphere, burning up as meteors.  The meteors can be traced back to a radiant point in the sky, located in the constellation Perseus.  This is why the meteors are called the Perseids.

The Perseids produce fast, bright meteors, some leave glowing trails.  This year the Perseids meteor shower peaks in August, on the nights of August 12 – 13th (Friday evening into the early hours of Saturday).  But it is worth looking for them now  (11.00pm onwards) especially as on the peak nights the meteors will be competing with a full Moon.  Any light pollution (and clouds) will spoil your view – so Moonless and clear nights are the best way to see Perseids before the peak nights in mid-August.  You do not need to look in any particular direction, the best views are achieved by being able to see as much of the sky as possible.

If it wasn’t for the full Moon on the peak nights, you would normally expect to see a meteor on average every 10 minutes or so. You will see less activity away from the peak nights, and it is also worth noting that meteors tend to appear in clusters followed by a lull, so, sometimes, patience is needed.

Note that, Meteor showers tend to be hyped by websites and media outlets (essentially click bait to drive traffic and to grab your attention).  What you won’t see, unless astronomers have got it very wrong, is a meteor storm.  A meteor storm is when the sky fills with shooting stars (like a celestial firework display).  Meteor storms happen incredibly rarely, the most famous in living memory being caused by the Leonids over North America in 1966.  See the links to my notes from previous Perseids meteor showers for an idea of what you might see from the average back garden in Belper.

(The headline image above has been created by Craiyon – an AI program that produces images from text prompts, in this case: “meteorite in a starry sky over trees and houses”)

12th of August: Full Moon – Another supermoon (note clash with peak of Perseids)

26th of August (am): A thin crescent Moon appears to be near to Venus

Venus is unmistakable – shining very brightly as the “morning star”.  A thin crescent Moon will appear to be close to Venus on the 26th

The International Space Station is one of the brightest objects in the night sky.  It is not hard to spot and flies-past periodically throughout the year.  Fly-pasts tend to swing from PM to AM.  Typically it will be in the sky for up to four minutes at a time.  It moves slowly across the sky, at first bright and then fading as it moves over the horizon.  NASA’s Spot the Station site tracks ISS and gives accurate forecasts of sightings.  You may also want to sign up to the Alerts Site – which gives advance warning of the most prominent sightings.