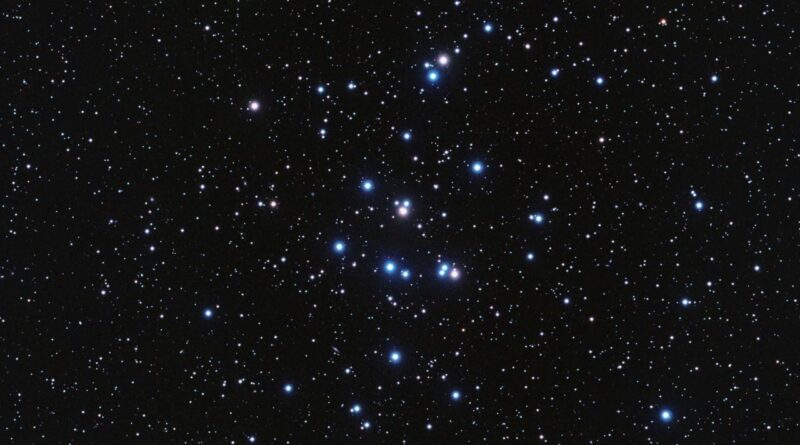 In March’s Night Sky: Notes on the CPRE Star Count. The Vernal Equinox and clocks go forward. The Beehive Cluster. Venus is the morning star.

In February, The Council for the Protection of Rural England asked people to take part in a star count between the 26th of February and the 6th of March. They asked people to count how many stars they could see in the constellation of Orion.

In Belper, cloudy nights got in the way of observation for most nights. My best night’s viewing was on the 27th of Feb at 11:30pm approx. The night was relatively clear and I was able to count 12 stars. (The CPRE regards anything below 10 stars as severe light pollution and gives the optimum result as 30 stars – a truly dark site). My garden is surrounded by other houses and these results are very similar to previous year’s observations. Although this level of pollution is not a problem for brighter objects, it does limit viewing opportunities for more diffuse targets – such as galaxies, nebulae, comets and even the Milky Way. In such circumstances, larger telescopes, or filters, do not necessarily solve the problem –  it is far better to have portable equipment that can easily be taken to “darker” sites

Results of this year’s survey will be used to develop the CPRE’s Interactive Map of light pollution and dark sites in England. See the webpage here: Night Blight.

To find out more about the CPRE’s Dark Skies Campaign, go to the relevant webpage here: Dark Skies.

The Vernal Equinox takes place on Wednesday 20th of March. This is when day and night are of almost equal length. The Vernal Equinox is regarded as the start of astronomical spring in the northern hemisphere, although meteorologists say it is March the 1st. The Vernal Equinox is also the time of the year when the Sun will rise due East and set due West (thus determining these cardinal points of the compass in your location).

It should also be noted that British Summer Time starts on Sunday the 27th of March and clocks go forward an hour in the UK. Most astronomy sites record times in UTC (Co-ordinated Universal Time) equivalent to Greenwich Mean Time (GMT). UK Astronomers have to be mindful that, after the 28th, they may need to add one hour to reports where times have not been converted: BST = UTC + 1.

March is generally a good time to view the Beehive Cluster. The open star cluster is easily seen and  a decent pair of binoculars (i.e around 8 /10 x 40 / 50) will reveal its beauty. The cluster itself is easily recognised, as it looks like a swarm of bees surrounding a hive. (See the headline image courtesy of NASA images).

The Beehive Cluster sits in the constellation of Cancer the Crab, which looks like an inverted Y shape in the sky. This constellation is one of the faintest in the sky and can be quite hard to spot in light polluted skies. It lies close to the much easier to find constellation of Gemini (look for the bright pair of stars Castor and Pollux). Look to the south from 8.30pm onwards when Cancer will be high in the sky. There is a useful sky map here to guide you, here:  Society of Popular Astronomy.

28th of March: Early morning, a crescent Moon appears to be close to Venus

Venus is currently the most prominent planet, it shines in the south-east: bright and unmistakable in the early morning sky. It makes a nice pairing with a crescent Moon on the 28th of March.

Mars and Saturn are harder to find, but if you want to see them get up early on the 28th of March, when Mars and Saturn will appear to form a triangle with Venus. Look to the south-east before dawn.

The International Space Station is one of the brightest objects in the night sky. It is not hard to spot and flies-past periodically throughout the year. Fly-pasts tend to swing from PM to AM – and currently it can be viewed in the early hours of the morning. Typically it will be in the sky for up to four minutes at a time – slowly moving across the sky, at first bright and then fading as it moves away from us and over the horizon.

Up to mid-March, there are some evening passes starting from the 17th of March – 18th of March, but ISS will be low in the sky and will only be visible for a minute. Best to check NASA’s Spot the Station site after this date for better sightings later on in March. You may also want to sign up to the Alerts Site – which gives advance warning of the most prominent sightings.